The European Commission has hit Apple with a record-breaking tax penalty of up to €13bn after finding the US tech group enjoyed a quarter of a century of illegal state support from Ireland that distorted competition in Europe. FT.com explains the dispute. 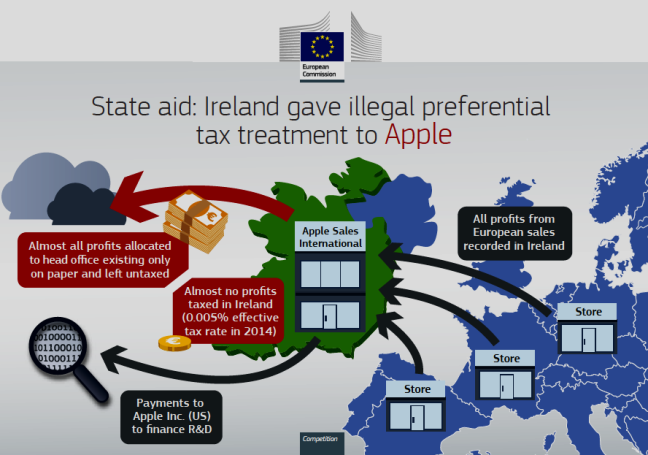 Vestager said under the tax avoidance scheme Apple was allowed to allocate almost all sales profits to a head office that “only existed on paper.” She said this head office “has no employees, it has no premises, and it has no real activities ... [and] was subject to no tax in Ireland or elsewhere.”

Customer Letter - Apple (IE) | apple.com: "... The Commission’s move is unprecedented and it has serious, wide-reaching implications. It is effectively proposing to replace Irish tax laws with a view of what the Commission thinks the law should have been. This would strike a devastating blow to the sovereignty of EU member states over their own tax matters, and to the principle of certainty of law in Europe. Ireland has said they plan to appeal the Commission’s ruling and Apple will do the same. We are confident that the Commission’s order will be reversed ..."--Tim Cook, Apple Inc.