Apple to Toutiao: World's 20 Largest Tech Giants are based either in the U.S. or China (valuations are as of early July 2018):

Courtesy of VisualCapitalist.com -- the rankings use updated market caps for all public companies as of early July 2018. Editor's note: on August 2, 2018, Apple became the first company in history to reach a market capitalization of US$1Trillion.

At the valuations listed above, added together, the above companies are worth $5.9 trillion, with a 75% / 25% split in terms of USA / China. Besides the USA-China duality, the list of the world’s largest tech giants is a divide between top-tier companies and those further down the list--there is not a single company with a valuation between $200 billion and $450 billion.

The top seven companies on the list account for 81% of the total value of the list, and they are all above the $450B mark--these include Apple, Amazon, Alphabet (Google), Microsoft, and Facebook as well as China's Alibaba and Tencent. The bottom 14 companies together are just 19% of the total list value – a fact that underlines how hard it is to vault a tech company into the upper echelon of the market. 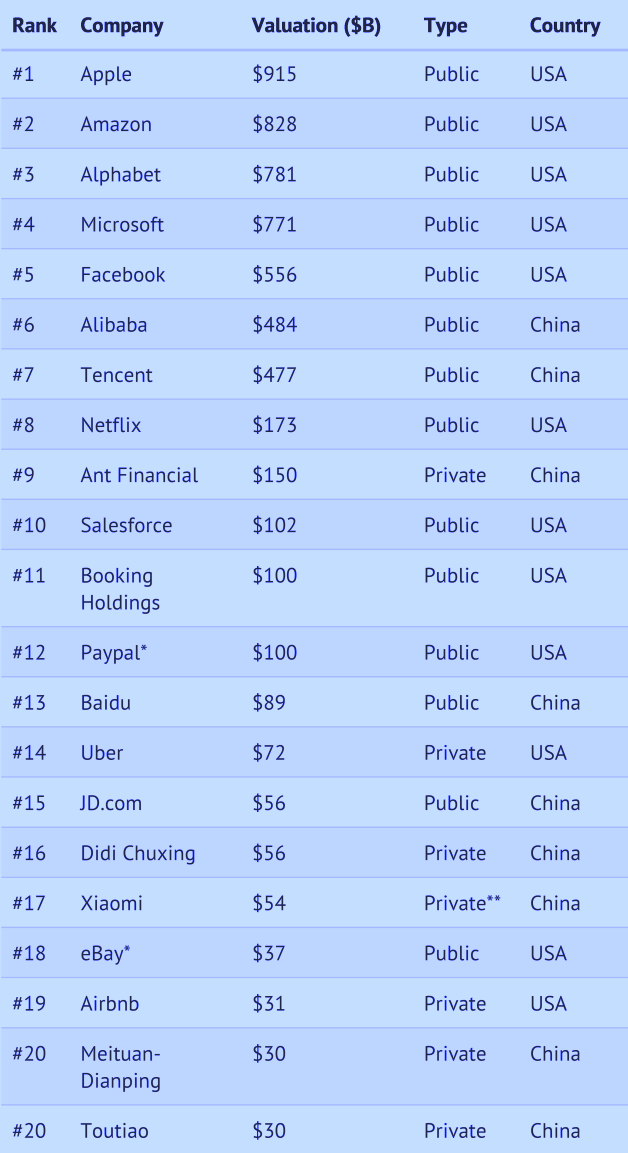 Source notes:
*In Mary Meeker’s chart, eBay-Paypal are listed together as one entity, whereas the above is based on the 2015 spinoff.
**Xiaomi’s valuation was in question ahead of its July 9 IPO in Hong Kong, and the valuation estimate of $54 billion was used in the list above.