1) Corruption at ICANN Metastasizing the Internet?

a. ".... We are witnessing corruption metastasizing at the root of the Internet at a breakneck pace. ICANN's precocity and opacity with alternative revenue sources is nothing short of remarkable. The spirit of cooperation that exists between ICANN and its largest ratepayer [Verisign] is unseemly, to say the very least. The stakeholder community that was supposed to serve as the check and balance on the ICANN organization has gone AWOL — bought off by the promise of a pittance and sung to sleep by fanciful lullabies of castles in the sky."--Greg Thomas, Managing Director of The Viking Group LLC (vikinginsight.com) (emphasis added) in ICANN and Voodoo Economics in Wonderland | circleid.com.

"... ICANN itself is probably Verisign's biggest "risk factor" -- see Weinstein case ... ICANN insists it is not a "regulator" and it could [and probably will] be replaced by the "global internet community" fed up with ICANN's incompetence [corruption] and shortcomings ("ICANN multistakeholderism does not work" has already become a common refrain in some sectors). ICANN has not had any governmental mandate since the IANA transition in 2016, and Verisign's .COM Registry Agreement with ICANN may not be worth the paper it is printed on, if ICANN is replaced, or a new internet root is adopted by most of the world. That is why the U.S. government refused to sign registry agreements with ICANN for the .MIL and .GOV [g]TLDs after [during] the IANA transition in 2016 (the U.S. maintains it has governmental "sovereignty" over the .GOV and .MIL [g]TLDs due to the anomaly of its historical "stewardship" over the internet.)"--comment on SeekingAlpha.com | VeriSign For A Defensive Strategy (emphasis, link, and [notes] added).

"But, I am puzzled by the argument that entering into a [registry] contract [with ICANN] about these [.MIL and .GOV gTLDs] is somehow a derogation of sovereignty. I had not heard that until Assistant Secretary Strickling said that earlier today or -- and so, I haven't had the chance to think about that." 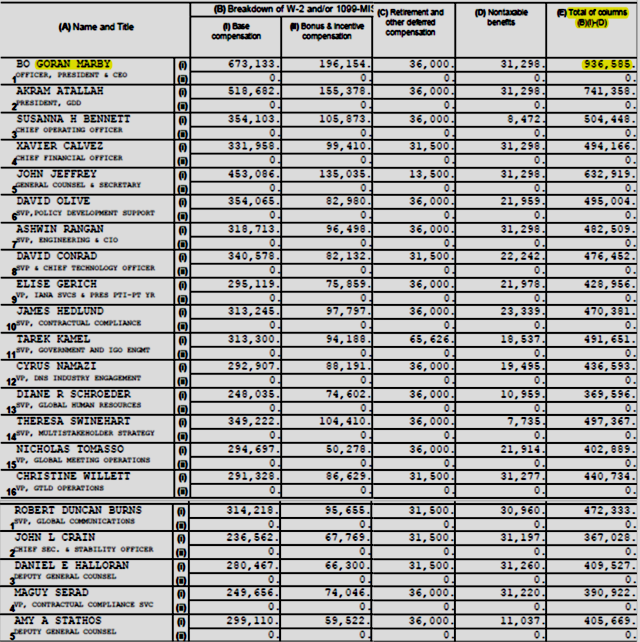 PTI FORM 990:  "PTI's vendors are paid by PTI's sole member, ICANN ... during the reportable time period of calendar year 2017, PTI had no employees. ICANN employees performing PTI activities were paid by ICANN, its sole member, and ICANN issued their form W-2. Compensation was reported under PTI as paid by a related organization (ICANN). PTI reimburses ICANN for all employee compensation related to PTI activities." [PTI Form 990 pp.29-30 of 40.]

Editor's note: ICANN spent $15 million in legal fees in connection with the IANA transition, in part to set up PTI as a separate entity apart from ICANN for the "IANA functions." To what end?

PTI FORM 990, PART III, LINE 4A (p.29 of 40):
"PTI is an affiliate of the Internet Corporation For Assigned Names and Numbers ("ICANN"). PTI was established in August 2016 under the laws of the State of California as a non-profit public benefit corporation and ICANN is its sole member. ICANN is responsible for the performance of the Internet Assigned Numbers Authority ("IANA") functions. the IANA functions include the maintenance of the registry of technical internet protocol parameters, the administration of certain responsibilities associated with internet DNS root zone and the allocation of internet numbering resources. Through contracts and subcontracts, ICANN has delegated the performance of the IANA functions to PTI effective October 1, 2016. PTI's sole purpose is the performance of the IANA functions as delegated by ICANN under a direct contract with PTI as well as three subcontracts. through this series of agreements, ICANN is obligated to provide PTI with all funding necessary for PTI to perform the agreements. PTI has no other funding source."

c. Andean Presidential Council's Special Declaration on the use of .AMAZON (pdf):

Editor's note: the above letter should never have had to be written had ICANN acted in the global public interest and done its job properly from the beginning, but as most of us know, ICANN is incompetent, corrupt and unfit. "Sovereignty" is not just a prerogative reserved for the U.S. and China. The .BRAND (i.e., trademark) new gTLDs were an ICANN corruption of the concept of "generic top-level domains" (see RFC1591). A "brand" a/k/a "trademark" is neither a monopoly nor generic. The entire ICANN new gTLDs program was, from the beginning, and still is, ill-conceived and corrupt. It is no surprise that new gTLDs are failing. A report published by afnic.fr this week indicates the future belongs to ccTLDs and .COM [at least as long as .COM is regulated by the U.S. government]:

ICANN has yet to be held accountable for the billions of dollars (US) in capital destruction and malinvestment it has caused through its ill-conceived and corrupt new gTLDs program. Another sad tale (among many) came to light this week: DigitalTown “clean up efforts” to avoid bankruptcy--DomainNameWire.com.

a. 10 important academic findings about trademarks from the past 12 months--#8. IDN homograph domain names are a major threat to online brands.

b.  WTR infographic about the trademark activity of Michael Gleissner: 4400 trademark applications and 5300 domain names are linked to Gleissner, who was born in Germany but reportedly now lives in the Philippines.

c. The Dark Web is tiny and unreliable: analysis of 55K onion domains on the Tor network finds only 8,400 had a live site, with many having poor uptimes--recordedfuture.com.

a. Data Privacy & Healthcare: a primer on complying with U.S. healthcare regulations on data privacy--9 Indispensable Steps to Becoming a HIPAA Hipster | PsychologyToday.com. The Health Insurance Portability and Accountability Act was enacted in 1996 and is applicable to the entire healthcare industry in the U.S.  The most common HIPAA violations are impermissible disclosures of protected health information.

b. U.S. v. Assange: The U.S. Government’s Indictment of Julian Assange Poses a Clear and Present Danger to Journalism, the Freedom of the Press, and Freedom of Speech | eff.org.

One of the greatest & most exciting promises of the early internet was its unparalleled freedom of expression, action & exploration unconstrained by Govt & corporate control. Just 2 decades later, it's about begging a handful of tech giants about who should & shouldn't be heard.
— Glenn Greenwald (@ggreenwald) June 1, 2019

d. Hong Kong's Tiananmen vigil attracts record turnout--nikkei.com: "The annual candlelight vigil at Victoria Park drew over 180,000 people this year, according to the organizer, the Hong Kong Alliance in Support of Patriotic Democratic Movements of China. This number ties with the peak year of 2014."

e. Russia: the Russian plan for a “sovereign internet” will use deep packet inspection for censorship and a backup domain name system--FT.com.
•
5) Most Read this past week on DomainMondo.com: