Federal Reserve Press Release 19 Jun 2019 (pdf): "Consistent with its statutory mandate, the Committee seeks to foster maximum employment and price stability. In support of these goals, the Committee [FOMC] decided to maintain the target range for the federal funds rate at 2-1/4 to 2-1/2 percent." 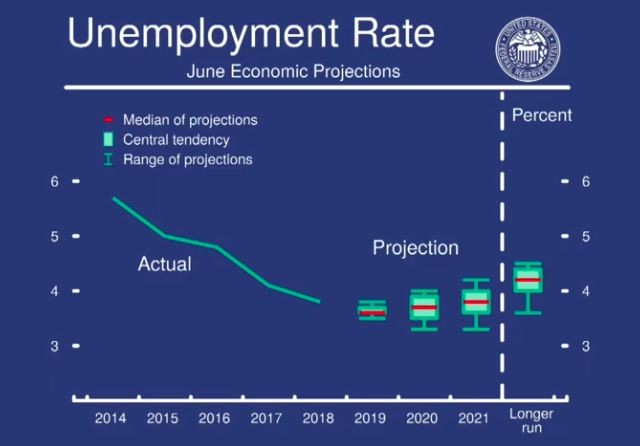 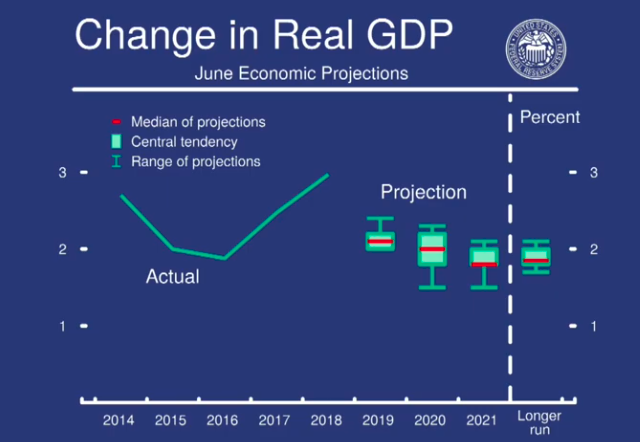 Federal Open Market Committee (FOMC) meeting Jun 18-19, with  Fed Chair Jerome Powell news conference set for Wednesday, June 19 at 2:30 p.m. EDT. S&P expects the Fed to signal at its June policy meeting that it intends to begin cutting rates. Federal funds futures trading had been pricing in two rate cuts before the end of the year, but only a 23% probability of a cut at this June meeting. Donald Trump and Larry Summers agree that rates are too high, inflation too low, yet the Fed is still facing the results of keeping interest rates too low for too long (Ben Bernanke and Janet Yellen's QE and ZIRP) the effects of which continue throughout the economy. Background: see previous FOMC press conferences (video) and federalreserve.gov and @federalreserve.

On top of that the European Central Bank (ECB) President Mario Draghi "unleashed global chaos with his preview of more stilmulus, prompting an angry response from President Trump"--more here and here and here: How The "Draghi Shock" Unleashed Chaos On Powell's Most Important Day | zerohedge.com.

Mario Draghi just announced more stimulus could come, which immediately dropped the Euro against the Dollar, making it unfairly easier for them to compete against the USA. They have been getting away with this for years, along with China and others.
— Donald J. Trump (@realDonaldTrump) June 18, 2019

Transcript of ECB President Mario Draghi, Jun 18, 2019 (pdf), video below: "... in the absence of improvement such that the (31:26) sustained return of inflation to our aim is threatened, additional stimulus will be required."


Above video published June 18, 2019 by the ECB: Introductory speech Mario Draghi, President, European Central Bank, ECB Forum on Central Banking 2019--20 Years of European Economic and Monetary Union--Sintra, Portugal, 17-19 June 2019. The European banking system lags far behind its global peers in terms of profitability and valuation (Almost Daily Grant’s, May 28). Bloomberg reports Deutsche Bank A.G. (whose shares have fallen 84% in the last nine years to less than 21% of its year-end 2018 book value) is set for another round of layoffs.


Today we’re sharing plans for Calibra, a newly formed Facebook [NASDAQ: FB] subsidiary whose goal is to provide financial services that will let people access and participate in the Libra network. The first product Calibra will introduce is a digital wallet for Libra, a new global currency powered by blockchain technology. The wallet will be available in Messenger, WhatsApp and as a standalone app — and we expect to launch in 2020 ....

For many people around the world, even basic financial services are still out of reach: almost half of the adults in the world don’t have an active bank account and those numbers are worse in developing countries and even worse for women. The cost of that exclusion is high — approximately 70% of small businesses in developing countries lack access to credit and $25 billion is lost by migrants every year through remittance fees. This is the challenge we’re hoping to address with Calibra, a new digital wallet that you’ll be able to use to save, send and spend Libra. From the beginning, Calibra will let you send Libra to almost anyone with a smartphone, as easily and instantly as you might send a text message and at low to no cost.