US Politics: Trump Effect, Deranged Dems & Mainstream Media Disinformation
Jan 21, 2020: Adam Schiff Caught "Mischaracterizing" Evidence Day One Of Senate Impeachment Trial. "How is it Donald Trump knows it’s all about the voters and everybody inside the Beltway thinks it’s all about them?"--Bob Lefsetz. See also Impeachment isn't the way forward (video), How Dems screwed themselves on impeachment (Aaron Maté video), and Andrew Yang's warning.
Election 2020: If the election was next year 'there'd be a third party' says Jeffrey Gundlach (July 2020 video). Mar 5, 2020: Joe Biden is ‘completely unelectable, says ‘Bond King’ Jeffrey Gundlach (video) assessing that Biden will likely be the Democratic Party's nominee for President, following the results of Super Tuesday. On the 2020 presidential election, Gundlach has said his base case is that President Donald Trump will get re-elected (Trump's popularity actually rose during the House Dems' 2019  impeachment proceedings, and impeachment galvanized support for Trump).
U.S. Department of Justice Inspector General's (an Obama appointee) Report On FBI Conduct (pdf), found "Clear Abuse" of FISA Process by the FBI during Obama's Presidency.  The report "now makes clear that the FBI launched an intrusive investigation of a U.S. presidential campaign on the thinnest of suspicions that, in my view, were insufficient to justify the steps taken"--Attorney General William Barr.
Read of the Year: The Inspector General’s Report on 2016 FBI Spying Reveals a Scandal of Historic Magnitude: Not Only for the FBI but Also the U.S. Media by Glenn Greenwald:

"If it does not bother you to learn that the FBI repeatedly and deliberately deceived the FISA court into granting it permission to spy on a U.S. citizen in the middle of a presidential campaign, then it is virtually certain that you are either someone with no principles, someone who cares only about partisan advantage and nothing about basic civil liberties and the rule of law, or both. There is simply no way for anyone of good faith to read this IG Report and reach any conclusion other than that this is yet another instance of the FBI abusing its power in severe ways to subvert and undermine U.S. democracy. If you don’t care about that, what do you care about?"

Why Was The Steele Dossier Not Dismissed As A Fake from the beginning in 2016? A cursory examination of the Steele Dossier should have convinced the CIA or the FBI that it was fake news. Any residual doubt would have vanished after learning that its author, Christopher Steele, was an opposition researcher paid by the Democrats to dig up dirt on Trump. That our most sophisticated government officials acted as if the Dossier were legitimate leads to only one conclusion. They were a knowing and willing  part of the Democratic and media smear of a presidential contender, and then president, that paralyzed U.S. politics for three years. We now know that the Steele Dossier is bogus. Inspector General Michael Horowitz drove the final stake through its heart. He found that the Dossier was compiled from hearsay and third-hand gossip from two low-level sources and that they denied the testimony attributed to them.--Paul Gregory, research fellow at the Hoover Institution.

What the Hillary Clinton campaign, its Democratic Party 'partners' and their 'partners' in the Obama Administration, including at the FBI and CIA, as well as in mainstream media, e.g., at CNN, Washington Post, New York Times, MSNBC, NBC, CBS, ABC, et al, were counting on, was this:

“One of the saddest lessons of history is this: If we’ve been bamboozled long enough, we tend to reject any evidence of the bamboozle. We’re no longer interested in finding out the truth. The bamboozle has captured us. It’s simply too painful to acknowledge, even to ourselves, that we’ve been taken.”--Carl Sagan

Editor's note: The sad truth is that too many people became 'invested' in the Hillary Clinton campaign's disinformation, and remain 'convinced' that the Steele Dossier is true and Trump is a 'Russian agent' no matter how much evidence you lay before them of how false their belief is. Democracy Dies in Ignorance & Disinformation.

See also Joe Biden Dec 16, 2019: "Section 230 should be revoked, immediately should be revoked, number one. For Zuckerberg and other platforms." Section 230 of the Communications Decency Act is one of the core protections of the internet, a key legal shield that allows internet platforms to host user-generated content with less liability, and one of the most valuable tools for protecting freedom of expression and innovation on the Internet, and Joe Biden wants to revoke it! Big Tech Employees & the 2020 Primaries, who was their favorite candidate? All (except Netflix employees) preferred Bernie Sanders (I-VT) by a wide margin of around 30%, while senile Joe Biden got early primary donations ranging from 0% at Netflix to only 2.6% at Microsoft. 😲 More here and here on Biden's cognitive decline.
Below is a look back at a past iteration of this page:

Beginning in 2016, the year of the U.S. government's IANA Stewardship Transition, Domain Mondo began maintaining this page on the U.S. Presidential Election and election 2016 fallout--page editor & analyst: @UnderMyPalm (opinions are his alone)--For older entries see  Year One of the Trump Presidency 8Nov2016-12Nov2017 (pdf), archive A (pdf) & archive B (pdf).

@ggreenwald "US political discourse has gone completely insane, infected by the worst toxins."

The Russian Collusion Hoax: The Mueller Indictments Still Don’t Add Up to Collusion | TheNation.com June 13, 2018: "A year of investigations has led to several guilty pleas, but none of them go to the core of the special counsel’s mandate."

Obama Administration Corruption of the FBI and DOJ: Oversight of the FBI And DOJ actions in advance of the 2016 Election--Full House Committee on Oversight and Government Reform, hearing June 19, 2018 (video).

Why the media has broken down in the age of Trump | New York Post | nypost.com by Michael Goodwin: "I’ve been a journalist for a long time. Long enough to know that it wasn’t always like this. There was a time not so long ago when journalists were trusted and admired. We were generally seen as trying to report the news in a fair and straightforward manner. Today, all that has changed. For that, we can blame the 2016 election or, more accurately, how some news organizations chose to cover it ... most of what you read, watch and listen to is distorted by intentional bias and hostility. I have never seen anything like it. Not even close ..."

How the Left Lost Its Mind | TheAtlantic.com: "... Democratic Senator Ed Markey delivered what seemed like an explosive bit of news during an interview with CNN: A grand jury had been impaneled in New York, he said, to investigate the Trump campaign’s alleged collusion with Russia. The only problem: It wasn’t true ..."

The Elitists’ Trump Excuse | WSJ.com: "His critics may be more corrupting to democracy and decency than he is."

New York Times’ Trump - Russia Collusion Narrative Reset -- George Papadopoulos & Carter Page | NationalReview.com Jan 1, 2018: "an explosive problem, this use of the dossier by the Obama Justice Department and the FBI in an application to the FISA court for authority to spy on Trump’s associates. Politically, it suggests that the collusion narrative peddled by Democrats and the media since Trump’s victory in the November election was substantially driven by partisan propaganda ..."

They had analysts on blabbing on about how bad this is, what it shows, legal implications. And it was all bullshit. Just wow.
— jeremy scahill (@jeremyscahill) December 8, 2017

How did “multiple sources” feed the same false information to multiple media outlets? The refusal of CNN and MSNBC to say only compounds the damage they caused. https://t.co/DWclCIfCoL
— The Intercept (@theintercept) December 9, 2017

The MSM #FakeNews has been continuous since the November 2016 election: The media's Russia probe meltdown: 3 screw-ups in one week | Axios.com 8 Dec 2017: "Three stories in the past seven days have crumbled under greater scrutiny."

A Hard Truth about mainstream media today: "Another hard truth: Many Alabama voters hold the mainstream media in such low regard that they've dismissed the Washington Post's reporting entirely."--Axios.com Nov 12, 2017.


The Big Lesson from Election 2016: The mainstream media and their pollsters are not to be trusted anymore--There Really Was A Liberal Media Bubble | FiveThirtyEight.com: "Groupthink produced a failure of the “wisdom of crowds” and an underestimate of Trump’s chances."


CNN Journalists Resign: Latest Example of Media Recklessness on the Russia Threat | theintercept.com by Glenn Greenwald, June 27 2017: "Three prominent CNN journalists resigned Monday night after the network was forced to retract and apologize for a story linking Trump ally Anthony Scaramucci to a Russian investment fund under congressional investigation. That article — like so much Russia reporting from the U.S. media — was based on a single anonymous source, and now, the network cannot vouch for the accuracy of its central claims ...."

The Real Story Of 2016 | FiveThirtyEight.com: "What reporters — and lots of data geeks, too — missed about the election, and what they’re still getting wrong."

The Media Has A Probability Problem | FiveThirtyEight.com--by Nate Silver: "The media keeps misinterpreting data ... the media has often overestimated the precision of polling, cherry-picked data and portrayed elections as sure things when that conclusion very much wasn’t supported by polls or other empirical evidence ... as I’ve documented throughout this series, polls and other data did not support the exceptionally high degree of confidence that news organizations such as The New York Times regularly expressed about Hillary Clinton’s chances. (We’ve been using the [New York] Times as our case study ... because their 2016 coverage had so many problems.) ... Probably the most important problem with 2016 coverage was confirmation bias — coupled with what you might call good old-fashioned liberal media bias ..."

The problem is even worse than what Nate Silver suggests--Inside Donald Trump's Election Night War Room | GQ.com: "Frank Luntz: At 5:01 [p.m. Election Day, Nov 8, 2017], all the narratives were written: Hillary Clinton was elected president ... I have a photograph [of a graphic]: "Fox News declares Hillary Clinton elected president."[The Trump campaign] saw the numbers, and they knew what I knew, which is that up to this point the exit polling had never been this wrong, so the assumption was that she was going to win ... I got texted. Colbert had just started [taping]. Someone had been interacting with the exit-poll people, and they told me that they had a huge percentage of refusals—much higher than anyone had expected, and no one had taken that into account. There was a fatal flaw in the exit number. It was the rejection rate, and they believed the rejection rate was overwhelmingly Donald Trump voters who refused to participate. At 11:10 P.M. I realized, nuh-uh, Donald Trump's going to be the next president ... The mood was stunned. I talked to friends at ABC, NBC News, and FOX News, some of them who loved Clinton and some of them who didn't. I didn't talk to anyone who was pro-Trump in any of these organizations. I don't know anybody at one network who was on the air as an analyst who voted for Trump." Watch CNN Election Night 2016 replay via YouTube.

For Wisconsin, Michigan, Pennsylvania – not a single mainstream media source gave an edge to Trump – a 100% fail for the pollsters! Every pollster said these states were “likely” or “leaning” Democrat. The day before the 2016 US Presidential Election, most pollsters and statistical models had pegged Hillary Clinton’s chances of winning at greater than 90%: 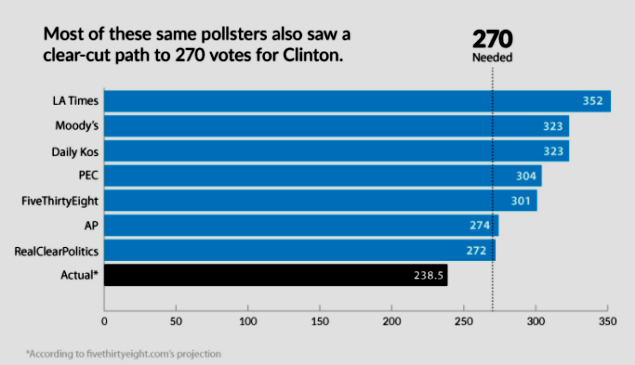 Graphics above courtesy of: Visual Capitalist.