Editor's note: the Fourth of July is celebrated as Independence Day in the U.S., commemorating the Declaration of Independence of the United States on July 4, 1776. But the 'Americans' who revolted (predominantly English men and women then living in the 13 original colonies), also kept their mother tongue, which continued to flourish and prosper, in the U.S., and throughout the world. 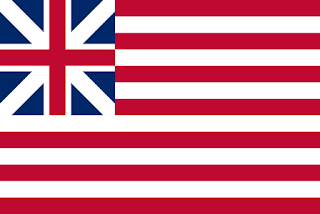 The Grand Union Flag is considered to be the first national flag of the United States. The design consisted of 13 stripes, red and white, representing the original Thirteen Colonies, the canton on the upper left-hand corner bearing the British Union Flag, the red cross of St. George of England with the white cross of St. Andrew of Scotland. The flag was first flown on December 2, 1775, by John Paul Jones (then a Continental Navy lieutenant), on the ship Alfred in Philadelphia.

The English Language and Americanisms

The Economist's language expert, Lane Greene, knows a thing or two about English. Lane is a fan of words, lots of words, and Lane is an American living in London. He's become accustomed to British English slang. But Lane often hears Britons complain that there are too many American words and expressions creeping into British English, these are called Americanisms. The Economist.com video above first published Nov 23, 2017.

The country with the largest number of English speakers (native + non-native) is India, where English is an additional official language for government work along with Hindi. The total population of India will surpass China by 2024.

The countries that have the best proficiency in English as a second language:
See also:

It's always nice when a movie review makes a reference to Shakespeare => ‘The Lion King’ feels way more like ‘Hamlet’ this time — and that’s why it’s so good https://t.co/UCOZLUb4RB via @washingtonpost
— The English-Speaking Union of The United States (@ESU_US) July 22, 2019