Why is Trump's Press Conference important?


“If Donald Trump succeeds to cheer up investors at this week’s conference, we could see a fresh rally in the U.S. stocks and the U.S. dollar. Therefore, the upside risks prevail in the U.S. markets”--Ipek Ozkardeskaya, senior market analyst, London Capital Group, note to investors.


Trump's Cabinet picks appear to be much stronger than Clinton's would have been, even Sarah Jones of the liberal New Republic seems to agree:

Hillary Clinton's cabinet would have sucked and no one should be surprised https://t.co/9zBjqP7X1i
— Sarah Jones (@onesarahjones) January 10, 2017

"Clinton had a team in waiting. By Election Day, her roster was so refined that most jobs just had one name. Here's her prospective Cabinet and West Wing staff, based on interviews with numerous Clinton insiders."--Mike Allen, Axios.com. See also: Consortiumnews.com: "... the think tank run by Michele Flournoy, the former Defense Department official considered to be most likely to be Clinton’s choice to be Secretary of Defense, explicitly called for “limited military strikes” against the Assad regime." Here's a partial listing of what Hillary's Cabinet would have looked like: 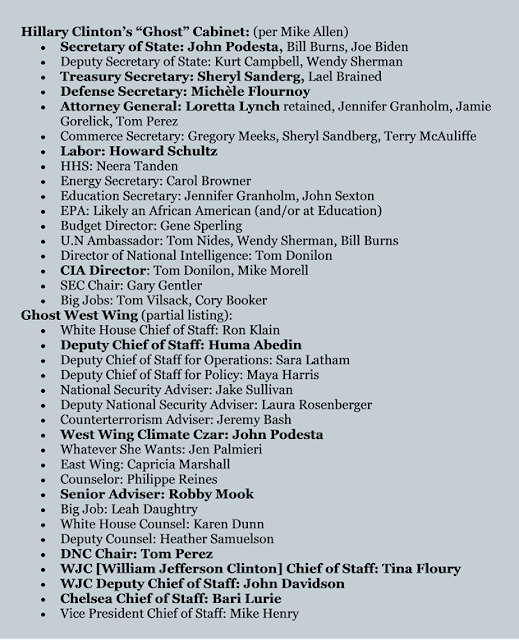