My .NET Comment Was REJECTED (at first) By ICANN, Was Yours?

Because I had a busy Tuesday morning out of the office, I stayed up late last night to finish my comment (8 pages long--embedded below) and submitted it very early Tuesday morning (EDT - US) before going to bed. Right after submitting the comment, I received the ICANN email:

Hours later I received the following email from ICANN: 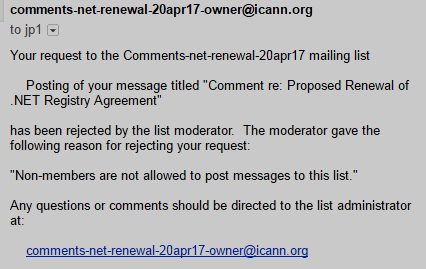 I discovered that email when I returned to my office Tuesday afternoon, and immediately responded:

I also forwarded a copy of the foregoing to the ICANN Ombudsman and ICANN Complaints Office with the following email:

I then received an email from ICANN Complaints Office:

And then I heard from an ICANN GDD (Global Domains Division) staff member:

And then I received the following from another ICANN staff member (Carlos Reyes):

And after submitting my comment again (exactly the same way I had originally sent it), I received the following:

Here's my comment (pdf), also embedded in full below. All comments "accepted" by ICANN may be viewed here. In the course of the chaotic back-and-forth I asked the ICANN Ombudsman and Complaints Officer "how many comments are being censored (rejected) by ICANN?" and never heard back. If your comment was rejected by ICANN, please let me know via Twitter @DomainMondo or via the email address at the bottom of the DomainMondo.com web page.

IV. Conclusion
1) RPMs specifically designed, and applicable to new gTLDs, are not appropriate for legacy gTLDs .COM, .NET, and .ORG, and I commend ICANN for resisting pressure from trademark and other special interests who may urge otherwise.

2) Verisign is a capable and qualified registry operator to continue operating the .NET generic top-level domain.

3) However, I have three objections to the proposed renewal of the .NET registry agreement, the first two are substantive and deal with pricing, and the third is an “ICANN process” objection:


1. The Section 7.2 ICANN fee of $0.75 per .NET domain name is discriminatory and unconscionable to .NET domain name registrants, and ICANN should reduce it to $0.25 (similar to other gTLDs). What may have been negotiated or appropriate in 2005, is no longer applicable 12 years later. ICANN should be ashamed for being so greedy and unfair to .NET registrants who are the ones bearing this cost.

2. The Section 7.3(a) provision for 10% compounded annual increases in .NET registration, renewal and transfer fees is unconscionable, particularly considering .NET has approximately 15 million domain name registrations, and the publicly reported profitability of Verisign, and its low cost of operations. It may be easy for ICANN staff to “roll over” and continue using the same boilerplate from previous renewals, but it has no justification based on reality—industry operating costs, market conditions, economic factors, and other relevant financial factors. This “formula” would lead to a doubling of registration fees every 7.2 years (Rule of 72). ICANN legal and GDD staff and management need a refresher course on good public stewardship and how to represent the global internet community in the global public interest.

Compare the ccTLD pricing for ccTLD .US ($6.50) with only about 2.5 million domain name registrations.

Approval of this proposed renewal with the $0.75 ICANN fee and 10% compounded annual increases in registration/renewal/transfer fees intact, will most likely cause renewed calls for government(s) to oversee ICANN, or replace ICANN with a new or existing intergovernmental multi-party or multistakeholder organization which can protect consumers (registrants), and the global public interest.