August 9th agenda and slides (pdf), chat transcript, Adobe recording, MP3, and transcript (pdf). High level notes and action items here. Below is excerpt from the EPDP team meeting chat transcript Aug 9, 2018, about 90 minutes into the meeting:
Editor's note: nothing of import was said or happened at the August 9th EPDP Team meeting. The "Triage" exercise is a HUGE waste of time, hardening differing positions before substantive discussions have even begun. The EPDP Team Chair, Kurt Pritz, is obviously struggling (anyone surprised?) with both process and substantive issues. The meeting eventually devolved into periods of silence in the Adobe Connect room until the EPDP Chair ended the meeting early. The 'smartest guy usually in the room' (Professor Milton Mueller) wisely absented himself from Thursday's exercise in group dysfunction.

Pre-meeting message from EPDP Chair Kurt Pritz with Tuesday's meeting slides (updated)(pdf) (embed below), and xslx file [Editor's note: converted for easy viewing online, for original go to Pritz's message at link above]. More EPDP Team information at 2)a. below.

"Initial indications are that the level of consensus is low."--Kurt Pritz, EPDP Chair 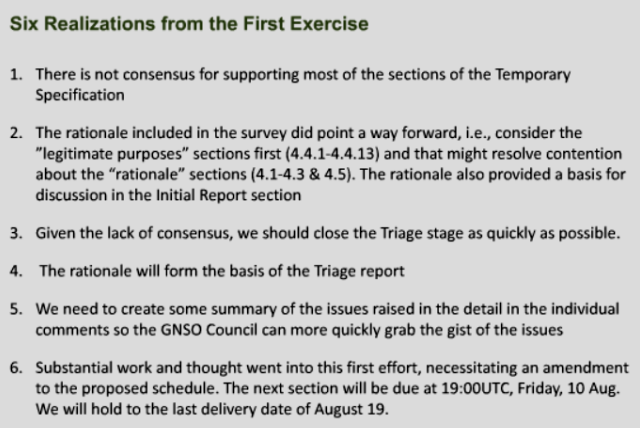 
"The Applicant's [ICANN's] immediate appeal of 13 June 2018 against the order of the Regional Court of Bonn of 29 May 2018 (10 O 171/18), in the version of the non-remedy order of 16 July 2018, is rejected .... The Senate was under no obligation to refer the case to the ECJ [European Court of Justice] pursuant to Art. 267 TFEU, because the interpretation of provisions of the GDPR was not material to the decision ..."--Higher Regional Court of Cologne (pdf in German--English translation of German original above, emphasis added).


"ICANN is considering its next steps, including possible additional filings before the German courts, as part of its public interest role in coordinating a decentralized global WHOIS for the generic top-level domain system and will provide additional information in the coming days."

a. GDPR & WHOIS: EPDP next meetings Tuesday, August 7, and Thursday, August 9, starting at 13:00 UTC 9am EDT, each day. Non-members of the EPDP Team, observers and alternates not replacing members, may listen via live audio cast:


As noted in the call, and in keeping with the charter, NCSG will refrain from addressing any access issues until the gating questions have been answered by consensus. We urge other stakeholder groups and ACs to do the same. We regret that the [ICANN] staff has disregarded the charter and has continued with what Berry [Cobb, ICANN staff] and Kurt [Pritz, EPDP Team Chair] admitted was “a mistake.”--Dr. Milton L Mueller, Professor School of Public Policy, Georgia Institute of Technology (emphasis added).

Mueller was responding to a prior email from ICANN staff:


In order to facilitate the triage of the Temporary Specification as outlined in the EPDP Team Charter as the first deliverable, please work with your appointing organization team members to complete the below surveys. Please find the relevant survey links and accompanying deadlines below:


"Milton, please note that per the discussion during yesterday’s meeting, the question specific to the Annex was removed from Part 4 of the survey. Instead, a comment box was added that allows those that want to provide further input, including on the annex to do so, but per the charter, any deliberations on the topics outlined in the annex will only commence after the gating questions have been answered. As such, any input provided in relation the annex will be parked until the moment that the gating questions have been addressed. I hope that addresses your concern."


Note from Tucows Investor Relations: "Beginning this quarter, Tucows is evolving the format of its quarterly conference calls.  Concurrent with the dissemination of this news release, management’s pre-recorded remarks discussing the quarter and outlook for the Company have been posted to the Company’s web site at http://www.tucows.com/investors/financials. In lieu of the usual question and answer period on past calls, for the next seven days (until Wednesday, August 15), shareholders and analysts can submit questions to Tucows’ management at ir@tucows.com. Management will post responses to questions of general interest to the Company’s web site .... [tucows.com] on Wednesday, August 22 at 9:00 a.m. ET.  Questions that are more specific will be responded to directly. All questions will receive a response."

In May, ICANN filed a legal action in Germany requesting an injunction against a Tucows affiliate, domain name registrar EPAG, in Germany, but ICANN's request was rejected twice by the original court as well as by the appellate court in Germany (see first feature story above) on August 1, 2018.

b. India: Facebook's WhatsApp blamed for the spread of 'fake news' in India which resulted in a mob lynching--reuters.com.

c. Cybercrime: Here are the costs of different cybercrime services, according to Positive Technologies (domain: ptsecurity.com) via TechRepublic.com: