ICANN, the Internet Corporation for Assigned Names and Numbers, is a non-profit corporation (see above) incorporated in the State of California, USA, in 1998. As a California corporation, it is subject to laws of the State of California, e.g., CA Codes (corp:5250): "5250. A corporation is subject at all times to examination by the Attorney General [of the State of California], on behalf of the state, to ascertain the condition of its affairs and to what extent, if at all, it fails to comply with trusts which it has assumed or has departed from the purposes for which it is formed. In case of any such failure or departure the Attorney General may institute, in the name of the state, the proceeding necessary to correct the noncompliance or departure." See also: California Unfair Competition Law (Wikipedia) and Private Attorney General Doctrine (pdf) and Private attorney general (Wikipedia).

In addition, U.S. Government authorities, as well as other governmental authorities throughout the world, have or may have, post-IANA transition, regulatory or law enforcement authority in their respective jurisdictions over ICANN, ICANN's Board of Directors, ICANN Officers, ICANN staff, or gTLD Registry Operators and ICANN-accredited Registrars. In the U.S., this may include one or more of the following, depending upon the entity and issues involved:


Relator status: California Code of Regulations, Title 11, Sections 1-11: "SECTION 1 Any person desiring "leave to sue" in the name of the people of the State of California under any law requiring the prior permission therefor of the Attorney General (which person is herein referred to as the relator), shall serve his application (which shall include the papers referred to in Section 2) upon the proposed defendant and within five days after such service shall file the same with the Attorney General ...." 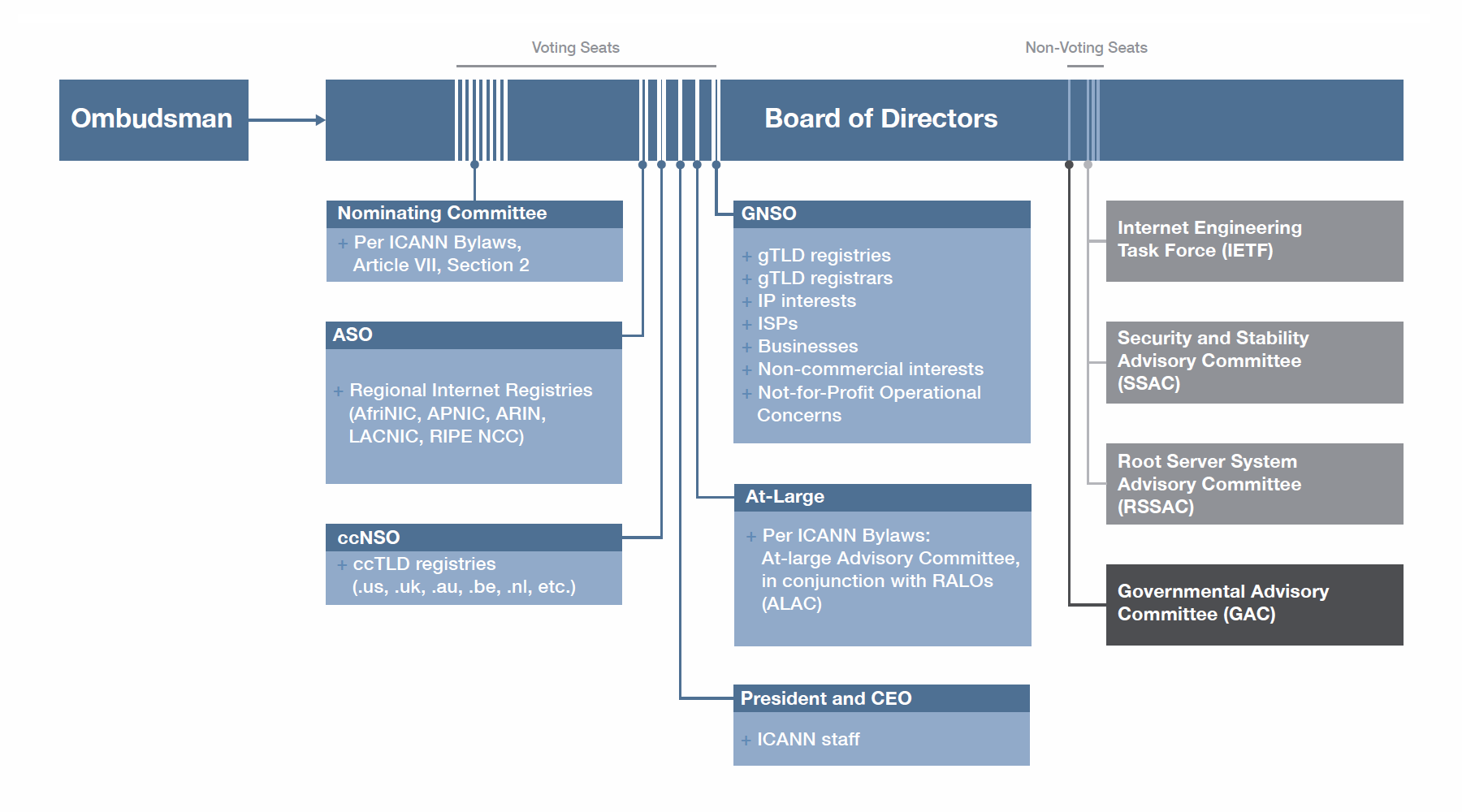 What Does ICANN Do? (source: ICANN)
See also helpful introductory Wikipedia articles:
IANA — Framework Documents: Key documents relating to the oversight framework for the performance of the IANA functions. Note: there is an active discussion concerning the future evolution of the oversight of the IANA functions, information on that process is available at http://icann.org/stewardship.

As a deliverable to section C.7.3 of the 2012 contract, ICANN has produced a document describing transition to a successor. Transition to Successor (April 2014)

IETF Memorandum of Understanding
Since 2000, protocol parameter registry assignments have been governed by a memorandum of understanding between ICANN and the Internet Engineering Task Force. This MOU is updated on an annual basis through supplemental agreements.
ICANN-IETF MOU and Supplemental Agreements

ICANN: "The Internet Corporation for Assigned Names and Numbers (ICANN), is a nonprofit organization that coordinates the Internet's global domain name system. The Internet Assigned Numbers Authority (IANA) is a department of ICANN responsible for managing the DNS Root and the numbering system for IP addresses. ICANN was created on September 18, 1998, and incorporated on September 30, 1998. It is headquartered in the Playa Vista section of Los Angeles, California. ICANN is responsible for the coordination of maintenance and methodology of several databases of unique identifiers related to the namespaces of the Internet, and ensuring the network's stable and secure operation. The numbering facilities include the Internet Protocol address spaces (IPv4 and IPv6) and assignment of address blocks to regional Internet registries. ICANN maintains registries of Internet protocol identifiers, and the management of the top-level domain name space (DNS root zone), which includes the operation of root name servers. Most visibly, much of its work has concerned the DNS policy development for internationalization of the DNS system and introduction of new generic top-level domains (TLDs)..." (source: Wikipedia)

IANA Internet Assigned Numbers Authority - "IANA allocates and maintains unique codes and numbering systems that are used in the technical standards (“protocols”) that drive the Internet. IANA’s various activities can be broadly grouped in to three categories:
Domain Names
IANA manages the DNS Root, the .int and .arpa domains, and an IDN practices resource.
Number Resources
IANA coordinates the global pool of IP and AS numbers, providing them to Regional Internet Registries.
Protocol Assignments
Internet protocols’ numbering systems are managed by IANA in conjunction with standards bodies.
"IANA is [currently] managed by the Internet Corporation for Assigned Names and Numbers (ICANN) under contract to the United States Department of Commerce (DOC) and pursuant to an agreement with the IETF. The Department of Commerce also provides an ongoing oversight function, whereby it verifies additions and changes made in the DNS root zone to ensure IANA complies with its policies...." (source: Wikipedia) Prior to the establishment of ICANN...IANA was administered principally by Jon Postel at the Information Sciences Institute (ISI) of the University of Southern California (USC) situated at Marina Del Ray (Los Angeles), under a contract USC/ISI had with the United States Department of Defense, until ICANN was created to assume the responsibility under a United States Department of Commerce contract. (source: Wikipedia)

InterNIC - InterNIC is a registered service mark of the U.S. Department of Commerce. It is licensed to the Internet Corporation for Assigned Names and Numbers, which operates the web site.