Additional Resources
Cherine Chalaby, ICANN Board Chair said: "While there are elements remaining to be finalized, the adoption of this Temporary Specification sets us on the right path to maintaining WHOIS in the public interest, while complying with GDPR before its 25 May enforcement deadline."

To ensure compliance with the GDPR, access to personal data will be restricted to layered/tiered access, where only users with a legitimate purpose can request access to non-public data through registrars and registry operators. Until a unified access model is in place, registries and registrars will have to determine which requests are permissible under the law. Alternatively, users may contact either the registrant or listed administrative and technical contacts through an anonymized email or web form available via the registered name's registrar. Registrants may opt to have their full contact information made publicly available. (source: ICANN.org)

ICANN's GDPR Train Wreck: How Many Days Until May 25?

With the May 25th GDPR deadline looming, has ICANN moved from its previous delusional fantasy world to confronting the harsh reality that ICANN is nowhere ready to comply with the European Union's General Data Protection Regulation (GDPR) by May 25, less than two weeks away, or is ICANN still lost in La-La Land? ICANN leadership and management essentially wasted most of the last two years instead of properly preparing for the GDPR:

You're "a day late and a dollar short" -- You should have written this a year ago -- instead you waited until the latter part of 2017 before you started taking the GDPR seriously -- what if everybody was as irresponsible and incompetent as the ICANN "management team"?
— Domain Mondo (@DomainMondo) May 11, 2018

#ICANN sends 6 pages worth of questions to Article 29 re #GDPR. Is it arrogance or ignorance that they expect an answer anytime soon?https://t.co/P0PEyve8x1
— thereforeICANN (@thereforeICANN) May 11, 2018

"A day late and a dollar short," ICANN is now grasping for straws--see May 5, 2018 Letter from ICANN Board Chairman Cherine Chalaby (pdf), to the Government Advisory Committee (GAC) Chair Manal Ismail re: "ICANN Board Board comment on GAC Advice regarding GDPR" excerpt below:


"... The Board’s current thinking and approach on the proposed Interim Model (May 25) is inconsistent or could be viewed as inconsistent with certain items of the GAC’s advice, and as a result the Board would find great benefit in having an exchange with the GAC on these matters ...  the Board proposes to discuss these matters via a conference call with the GAC during the week of 7-13 May 2018. The Board acknowledges the short notice of this request but given the fast-approaching effective date of the GDPR [May 25] realizes the need to move as quickly as possible to address the GAC advice prior to the Board taking action on an Interim Model (May 25) ..." (emphasis added)

The results from the ICANN Board's confab with the GAC? "... the Board has made a preliminary determination that its current approach on the proposed Interim Model (May 25), to be implemented in a Temporary Specification, is inconsistent or could be viewed as inconsistent with certain items of GAC advice."--11 May 2018 Letter from Cherine Chalaby to Manal Ismail (pdf).

7 May 2018 Letter from Tobias Sattler to Akram Atallah [Published 10 May 2018] Contracted Party House (CPH) TechOps on GDPR Impact on Domain NameTransfers and Registrant Contact Changes: "Unfortunately, the alternative proposal put forth by ICANN is not feasible for implementation in advance of 25 May 2018."

Accred-Model Version 1.5 May 11, 2018: version 1.5 [pdf] Accreditation and Access Model.--"A few skeptical thoughts in a tweet thread. https://twitter.com/qirtaiba/status/995071967572062214 These may not qualify as "constructive", but I wouldn't want to have silence interpreted as assent." -- Jeremy Malcolm, Senior Global Policy Analyst, Electronic Frontier Foundation eff.org.

Editor's note: ICANN Board Chair Cherine Chalaby said this week that accreditation guidance from the EU will not come until late summer, seemingly dashing the hopes of the lawyers and lobbyists pushing their "version 1.5" above. It's just one more aspect of ICANN's GDPR Train Wreck. Send your 'Thank You' notes to ICANN CEO Goran Marby & the ICANN Management Team.

a.  Google's (purchase price $25,001,000) new gTLD .APP launched (General Availability) this past week, achieving a total of  191,447 registrations by Friday May 11, 2018, according to  ntldstats.com, but even .APP was unable to stanch the overall hemorrhaging of new gTLDs' domain name registrations:
This is what happens when you design and implement a new gTLDs program founded on consumer fraud, .BRAND extortion racket, exploitative pricing power and greed, and ICANN incompetence:
ICANN's failing new gTLDs are also impacting ICANN's finances--ICANN FY18 Q3 Presentation (pdf)--excerpt: 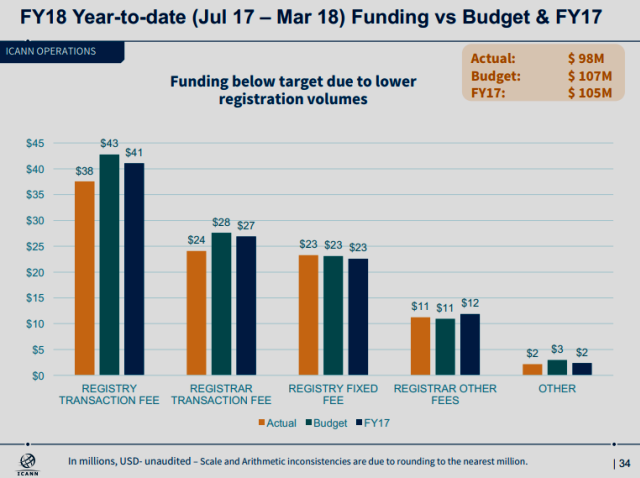 b. Afilias vs ICANN et al re: new gTLD .WEB: see latest correspondence between counsel for Afilias and counsel for ICANN.


"... all the recommendations have been either flatly rejected or modified. Furthermore, if the proposal is adopted by the OEC and ICANN Board without ALAC first properly dealing with the concerns from the wider ICANN community, this would set an alarming precedent for any future ICANN Review. If critical opinions and recommendations, particularly those that are broadly supported within the ICANN community, are perceived as ultimately being ignorable, ICANN Reviews will lose credibility"--CPH to ICANN Board, infra


".... The CPH believes the Organizational Effectiveness Committee of the ICANN Board should not consider ALAC’s proposal until such time as a detailed response is provided by ALAC that addresses criticism raised by the At-Large Review report, and the questions helpfully put together by ICANN staff. This response should be presented to the whole ICANN community, so that any further input from, or discussion with, the community can be arranged, to see the Review through to an appropriate end."--bunton-to-chalaby-07may18-en.pdf [59.5 KB]

d. RSSAC034 | Report from the RSSAC May 2018 Workshop | ICANN.org: "The purpose of this workshop was to finalize the proposed governance model (the Model) for the DNS Root Server System (RSS). At the workshop, the RSSAC reviewed the Model, discussed scenarios and implementation, and planned next steps." More info: 09 May 2018 rssac-034-09may18-en.pdf [63.5 KB]

e. Adobe Connect Update | ICANN.org: "Based on your overwhelming sentiment, over 75% of you asked in one way or another for Adobe Connect, we are carefully moving ahead with attempting to restore Adobe Connect"--Editor's note: my input via email to ICANN April 20, 2018 (cc EU antitrust & WP29, David Redl (NTIA), ICANN CEO, Board Chair & Ombudsman):


"This is a "no-brainer"--restore the Adobe Connect ASAP (until you find a better or equal solution for less cost)--Adobe Connect should have NEVER been taken offline, particularly in the middle of ICANN61, as you report the only known exploit of the vulnerability was by the same "researcher" who "discovered" and reported the vulnerability. By that same logic, the entire DNS, with all of its KNOWN and UNKNOWN vulnerabilities, including the Public WHOIS, should be taken offline immediately. But since ICANN org has no respect nor regard for the vast majority of the world's domain name registrants, we all know where ICANN org stands on that issue. As members of the global internet community, none of us have a choice, we are continuously assaulted and burdened by the poor decisions made by overpaid and incompetent ICANN org management and the dysfunctional, self-selected "ICANN community" dominated by "special interests"--trademark lawyers, corporate lobbyists, and contracted parties--registrars and registry operators. Maybe the European Union can help us with the "privatized" ICANN global monopoly, since the U.S. government abandoned its "stewardship" role in 2016."

a. Trademarks: Flood of Trademark Applications From China Alarms U.S. Officials | WSJ.com: "... applications that officials say appear to be rife with false information. .."

b. $GDDY: GoDaddy's Ray Winborne, Chief Financial Officer, and Mike McLaughlin, Chief Customer Officer, will present at the 46th Annual J.P Morgan Technology, Media and Communicaitons Conference in Boston on Tuesday, May 15, 2018 at 3:00 p.m. EDT. A live audio webcast of the event will be available on GoDaddy's investor relations website. Following the presentation an audio replay will be available at investors.godaddy.net. See also: Q1 2018 results reported this past week by GoDaddy $GDDY  and Tucows $TCX.

b. How to Trace an Email Message | SecurityBoulevard.com

5) Three Most Read Posts & Readership Stats this past week on DomainMondo.com: