MacroView Feature •  Market Outlook for 2017, Trump Effect, Optimism, Risks To Watch For in 2017:

•  Re-Energized U.S. Dollar Looms Over the Rest of the World | WSJ.com: "On Wall Street, the rising dollar has been one of the most visible signals of growing optimism in the U.S. economy ... Expectations of fiscal stimulus under President-elect Donald Trump “have absolutely re-energized the dollar,” said Alan Ruskin, head of G10 foreign exchange strategy at Deutsche Bank. “This is a major shift in policy dynamics” ... Roughly 60% of clients surveyed by Citigroup believe the dollar will be either “moderately higher” or “sharply higher” against developed and emerging market currencies next year." 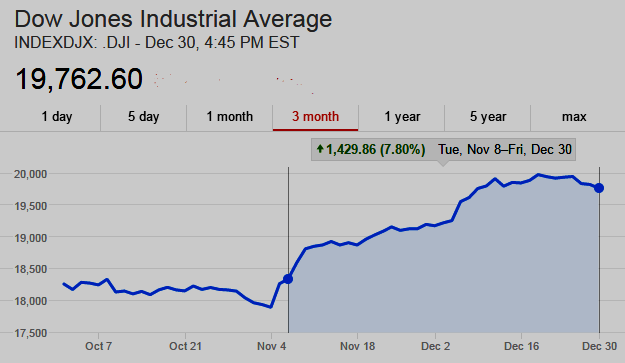 The Trump Effect has so far generated confidence and optimism in the markets and economy but will it continue in 2017? Despite the efforts of the Obama administration to kill the post-election Trump Rally by having Secretary of State John Kerry openly condemn Israel, abstaining on the UN vote against Israel, and engaging in dubious geo-political retribution--"Obama Strikes Back at Russia for Election Hacking" | NYTimes.com--the Dow Jones Industrial Average still managed to close for the year on Dec. 30, 2016, up 7.8% since Trump's election on Nov. 8, 2016 (see chart above).

Fortunately for U.S. and global markets, Putin is looking ahead "to cultivate relations with Trump" and has decided Russia will not retaliate, for now, against U.S. acts of provocation in these final, apparently dysfunctional, last days of the Obama administration:

•  2017 Risks: 2017 Elections in France (April-June) and Germany (August-October): The West Should Hope That Merkel Loses | ForeignPolicy.com.

Could Marine Le Pen be elected the next President of France?:

Could Marine Le Pen be elected the next President of France? Populist movements are on the rise all over Europe—one reason why the French presidential election in 2017 may be a nail-biter. Video above published December 28, 2016 by Economist.com.

•  China: The rising U.S. dollar has exacerbated capital outflows and tightening liquidity in China. Chinese stocks and bond markets have fallen since Trump's election, and Chinese regulators have injected money to allay a possible credit squeeze. China’s central bank had already drained $300 billion of its reserves in the first three quarters of 2016, more than it spent in all of 2015, in an attempt to slow the Chinese yuan’s decline against the U.S. dollar. According to WSJ.com, China’s currency is down 4.3% against the dollar since October, falling to a record low.

No trade wars, but watch a new trading book with China | cnbc.com: "Washington's intent to correct its huge trade imbalance with China is not coming as a surprise to Beijing. The Zhongnanhai mandarins know that their trade surpluses with the U.S. -- $366 billion in 2015 and $289 billion in the first ten months of this year -- are difficult issues that must be addressed. That is the substance of the problem. The rest is rhetoric."

Chinese media praise Trump's 'experience and ideology' | Yahoo.com (Nov. 15, 2016): "Chinese state-run media lauded Donald Trump Tuesday after a phone call between him and President Xi Jinping, saying that the president-elect's emergence could mark a "reshaping" of Sino-American relations. The pair spoke Monday, when Xi said that the two powers needed to co-operate and Trump's office said the leaders "established a clear sense of mutual respect for one another" ... Monday's conversation was "diplomatically impeccable and has bolstered optimism over bilateral relations in the next four years", China's frequently nationalistic Global Times newspaper said in an editorial."

In China, the Communist Party’s 19th National Congress in October 2017 determines who will rule the world’s rising superpower for the next five years. Amid bitter political infighting, the changes will be sweeping. Video above published Dec 27, 2016, by Economist.com.

•  From Russia with Love: "Mr. Putin’s popularity really is very high [in Russia]: around 70 percent. During the 2015-16 recession, G.D.P. fell by more than 4 percent and real incomes declined by 10 percent. That is significant, but much less serious than, say, the 40 percent drop in G.D.P. that Russia experienced during the first half of the 1990s. Despite a dramatic decline in oil prices and the burden of sanctions imposed by Western governments after the Crimea crisis, the Putin administration has managed to avert economic disaster by pursuing competent macroeconomic policies."--NYTimes.com

•  Good Question: How Well Will Trump Get Along With His Own Cabinet? | MishTalk.com. But maybe Trump really likes having a diversity of opinions unlike Dem-libs who talk of 'diversity' but only tolerate 'conformity' in opinions:


Joe Scarborough on 2016 Election Results a 'Complete Earthquake' | Morning Joe | MSNBC.com Nov 9, 2016: "... talk about elephant in the room (media) here ... everything that we've all talked about they [the media] could have seen it coming, but the media was all in on this narrative [Clinton will win, Trump has no path to 270 electoral votes] and it was just everybody [in media] was marching in lockstep 'Clinton's going to win, Clinton's going to win.' Early voting came out and I was doing one of those little '270 to win' maps. I immediately looked at early voting and I moved North Carolina and Florida to Trump. You would have thought I hung a Nazi flag in front of my house and everybody was talking about Florida is 'in the bag' (for Clinton) and I kept looking at the numbers and I kept thinking I know this state [Florida], I know north Florida, but every single analyst said there was no way Trump was going to win Florida ... (Mika interjecting: 'Trump has no path to 270 electoral votes we were told repeatedly.')"

For the record, Trump won 306 electoral votes, Clinton only 232. So much for the old legacy media's propaganda, fake news, and failed attempt to suppress Trump voter turnout by incessantly publishing their false narrative: "Trump has no path to 270 electoral votes."

•  One More Thing: People are now using the term “fake news” to refer to discredited reports from mainstream media (MSM), and the New York Times is surprised? LOL! See: Fake News: TheGuardian.com Caught Deceptively Editing Quotes from Julian Assange Interview | Breitbart.com and Something About This Russia Story Stinks | RollingStone.com: "... it's OK [now] to publish an allegation when you yourself are not confident in what your source is saying is a major departure from what was previously thought to be the norm in a paper like the [Washington] Post."


The Guardian’s Summary of Julian Assange’s Interview Went Viral and Was Completely False | TheIntercept.com: "This article is about how those false claims — fabrications, really — were spread all over the internet by journalists, causing hundreds of thousands of people (if not millions) to consume false news. The purpose of this article is to underscore, yet again, that those who most flamboyantly denounce Fake News, and want Facebook and other tech giants to suppress content in the name of combating it, are often the most aggressive and self-serving perpetrators of it."--Glenn Greenwald