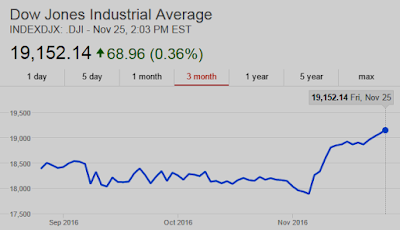 For the week, the Dow was up 1.5%, the S&P 500 up 1.4%, and the NASDAQ Composite Index up 1.45%. Since the U.S. presidential election on Nov. 8, the Dow industrials are up 4.5%, having reached eight new records during that period. Meanwhile small-company index Russell 2000 has closed at a new record every trading session since Nov. 14. “Nothing is stopping the market at this point.”--Jonathan Corpina, senior managing partner at Meridian Equity Partners, as reported by WSJ.com.

US markets: Donald Trump’s bull run | FT.com: "David Donabedian, chief investment officer at Atlantic Trust, noted that as soon as the election results were clear, the Trump team put out a pro-growth economic message. “Coming right out of the block in the first 12 hours they hit all the right notes: the need to boost economic growth, the need for corporate tax reform, the importance of boosting infrastructure spending,” he says. That turned a fear of a visceral sell-off into an environment where “animal spirits” were restored — and upward momentum took hold."

Likewise, the University of Michigan reported Wednesday that Americans became more optimistic about their finances and the economy after Donald Trump won the presidential election:


"The initial reaction of consumers to Trump's victory was to express greater optimism about their personal finances as well as improved prospects for the national economy. The post-election gain in the Sentiment Index was +8.2 points above the November pre-election reading, pushing the Index +6.6 points higher for the entire month above the October reading. The post-election boost in optimism was widespread, with gains recorded among all income and age subgroups and across all regions of the country."--University of Michigan Surveys of Consumers, chief economist, Richard Curtin

•  One day after the European Parliament called for a pause in Turkey’s EU accession talks in protest at Ankara’s “repressive” and “disproportionate” response to a violent coup attempt earlier this year:

•  French Prime Minister Manuel Valls Warns Europe Could Collapse: France's PM Manuel Valls said Germany and France, for decades the axis around which the EU revolved, had to help refocus the bloc to tackle an immigration crisis, a lack of solidarity between member states, Britain's pending exit, and terrorism--Time.com.

•  Italy’s Crisis Turns into a Multi-Headed Hydra | WolfStreet.com: "As with all major crises, Italy’s current predicament is a multi-headed hydra. It’s a banking crisis, an economic crisis, a debt crisis, and a political crisis all rolled into one, and all coming to a head at the same time."

•  India decides to wreck its economy: Earlier this month Prime Minister Narendra Modi announced that 500 and 1,000 rupee notes had become illegal as part of a crackdown on corruption. But scarcity of new notes has brought the economy to a virtual standstill. India is a country of 1.25 billion people and has a largely cash economy. 500 and 1,000 rupee notes were 86% of the cash in circulation.

Foreign investors have been pulling out of India for the past 2 weeks https://t.co/x9pJ2LHand pic.twitter.com/Aff9q5MSzp
— Bloomberg (@business) November 26, 2016


•  We've heard this before--China Issuing ‘Strict Controls’ on Overseas Investment | WSJ.com: "Government to announce new measures intended to curb capital flight."--on the other hand, where there is a will, there is a way.

•  You're Fired! Donald Trump’s media summit was a ‘f—ing firing squad’ | NYPost.com: "Donald Trump scolded media big shots during an off-the-record Trump Tower sitdown on Monday ... “The meeting took place in a big board room and there were about 30 or 40 people, including the big news anchors from all the networks,” the other source said. “Trump kept saying, ‘We’re in a room of liars, the deceitful dishonest media who got it all wrong.’ He addressed everyone in the room calling the media dishonest, deceitful liars. He called out Jeff Zucker by name and said everyone at CNN was a liar, and CNN was [a] network of liars,” the source said ..."

•  What the media got wrong about Trump. “Literally everything. I can’t think of another instance in which the media was so off in its predictions, evaluations and the ways in which it hedged its bets. Every person and every outlet, the fundamental assumption was not only was Donald Trump unfit to be president but that he would never be president. If the American people didn’t stop him from being president, the media would stop him with their opprobrium and their collective decision he couldn’t be.”--Michael Wolff | digiday.com

•  The Washington Post, useful-idiot shills for a failed frantic status-quo, has lost control of the narrative: "Don't you think it fair and reasonable that anyone accusing me of being a shill for Russian propaganda ought to read my ten books in their entirety and identify the sections that support their slanderous accusation? I was amused to find my site listed on the now-infamous list of purportedly Russian-controlled propaganda sites cited by The Washington Post. I find it amusing because I invite anyone to search my 3,600-page archive of published material over the past decade (which includes some guest posts and poems) and identify a single pro-Russia or pro-Russian foreign policy entry."--Charles Hugh Smith

That WPost story on Russian fake news is total journalistic garbage, but it serves various agendas so it's being uncritically passed around.
— Glenn Greenwald (@ggreenwald) November 25, 2016

Check to see how many journalists uncritically promoted and heralded this story today. It's scary. https://t.co/RtwkbSGCV8
— Glenn Greenwald (@ggreenwald) November 25, 2016

This type of online censorship is a major objective of this new "fake news" craze, which is why a clear definition of the term is crucial. https://t.co/CqjBnk30e9
— Glenn Greenwald (@ggreenwald) November 25, 2016

•  Pollsters go back to drawing board | TheHill.com: "In Wisconsin, Clinton swept all 19 polls conducted since June, according to RealClearPolitics.com ... this year, 13 percent of voters told exit pollsters they decided their vote in the campaign’s final week, with Trump winning that group by 5 percentage points."  See also: The Presidency Can Bend to Fit Trump's Personality | Bloomberg.com.

•  Pelosi to Face Little-Known Challenger as Democrats Rue Election | Bloomberg.com: “We have lost over 60 [House] seats since 2010. We have the fewest Democrats in state and federal offices since Reconstruction [1865-1877, the era after the American Civil War]"--Congressman Tim Ryan. See also Senate Democrats’ Surprising Strategy: Trying to Align With Trump | NYTimes.com.

•  C-SPAN’s Trump Tower #Elevatorcam, and the Meaning of Life: "It’s all oddly irresistible, sort of making the purely pedestrian mesmerizing, even prompting the attempted dissection of every fragment of chitchat. It seemed as if one tenant asked the chief of the elevators (the guy at the gold elevator front desk emblazoned with a black “T-T” on the front), “Is Trump here?” It appeared as if the response was yes."--VanityFair.com