“The answer is known in advance, either because you created what the client wanted or the client selected you as the most favorable..."
— George Kirikos (@GeorgeKirikos) November 17, 2016

"Compass economists can reach very different answers to the same question, depending on who is paying them."
— George Kirikos (@GeorgeKirikos) November 17, 2016 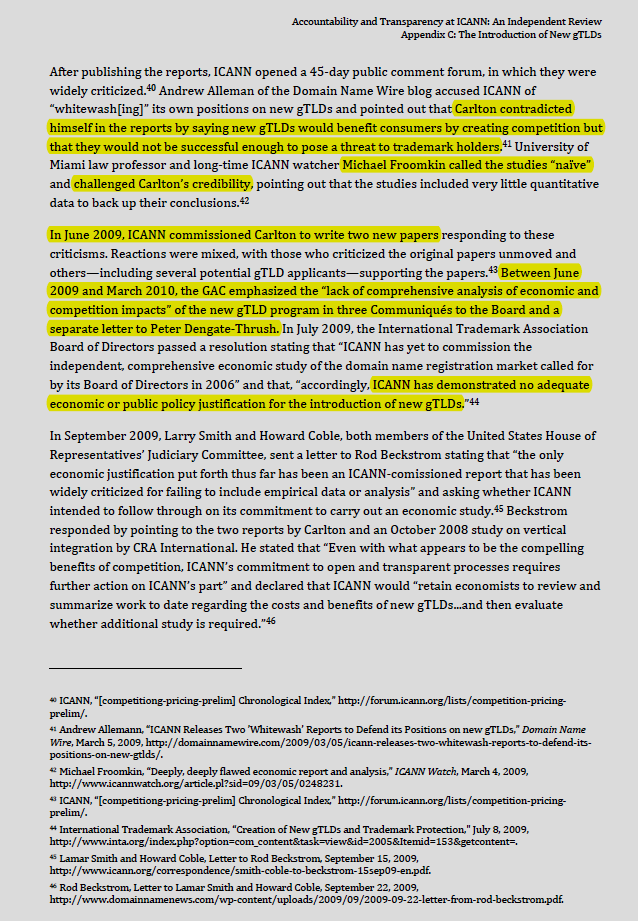 For more see: These Professors Make More Than a Thousand Bucks an Hour Peddling Mega-Mergers | ProPublica.org: "Earlier this year, a top Justice Department official criticized Compass Lexecon for using “junk science.” ProPublica sent a detailed series of questions to Compass Lexecon for this story. The firm declined to comment on the record .... Carlton’s predictions did not pan out ..." Also see:

Wuzhen Report on World Internet Development 2016 released | wuzhenwic.org: "President Xi Jinping addressed the gathering via video, and Mr. Liu Yunshan, Member of Standing Committee of Political Bureau of CPC Central Committee, delivered a keynote presentation at the opening ceremony. Over 1600 representatives from more than 110 countries and territories, and 16 international organizationshad a chance for extensiveand unrestricted discussions on Internet development prospects."

China Presses Tech Firms to Police the Internet | WSJ.com: "Alibaba now has about 3,000 of its nearly 50,000 employees involved in counterterrorism and cybersecurity efforts ... The main speaker at the conference wasn't a technology official, but the Chinese Communist Party’s ideological chief Liu Yunshan. Mr. Liu proclaimed China to be a global opinion leader on the use of new technologies in counterterrorism ... Many industry stakeholders aren't convinced. But the presence of big western companies at the conference -- including Facebook, International Business Machines Corp., Qualcomm Inc., Microsoft Corp. and LinkedIn Corp. -- illustrated the importance of China to their businesses."

•  China’s vast Internet prison | WashingtonPost.com: "The latest effort came Monday. China’s national parliament approved a cybersecurity law that can be used to restrict free speech and force foreign Internet companies to heed the demands of China’s security services. Censorship is not new in China; a huge phalanx of officials are devoted to it, harsh punishments are meted out, and the country is ringed by a content-blocking Great Firewall. But now censorship will be more fully enshrined in the legal code." See also: China adopts new cybersecurity law that has overseas rights groups and businesses completely spooked: Shanghaiist.com: "Despite widespread international concern from corporations and rights advocates for more than a year, Chinese authorities pressed ahead with this restrictive law without making meaningful changes," said Human Rights Watch (HRW) China director Sophie Richardson.

•  Freedom on the Net 2016 | FreedomHouse.org  "Internet freedom around the world declined in 2016 for the sixth consecutive year.
•   UK has passed the 'most extreme surveillance law ever passed in a democracy': "The law forces UK internet providers to store browsing histories -- including domains visited -- for one year, in case of police investigations."--ZDNet.com


•  CCWG ploughs on with WS2: ICANN57 | legallyindia.com: "substantial discussions in WS2 are only just kicking off, with some subgroups (such as the Diversity subgroup) yet to begin their deliberations"--for more on WS2 see WS2 - Enhancing ICANN Accountability | ICANN.org.

•  WIPO Transparency: WIPO Adopts Open Access Policy for its Publications | WIPO.int: The World Intellectual Property Organization announced its new Open Access policy to promote the widest possible public access to its publications, furthering the Organization’s commitment to the dissemination and sharing of knowledge.

• Understanding the DNS Attacks: Convenience v Security | JDSupra.com: Understand what your online digital footprint looks like. This is just as important for an individual as for a company. Knowing this can help to prevent others from exploiting you. Understand how you look in the eyes of the hacker, and diminish or secure your assets ... The accessibility of our assets directly impacts infrastructure exploitation. If we protect our assets, we are less vulnerable. Preparedness is the best predictor of how quickly and effectively a person or a company will recover from an attack ... Evaluate all third-party providers and partners connected to your company for their security both at the outset and on an ongoing basis to mitigate the risk of attack, breach, or business interruption.

•  Most popular posts this past week (# of pageviews Sun-Sat) on DomainMondo.com: