Happy Thanksgiving To All, Including President-elect Trump & Family 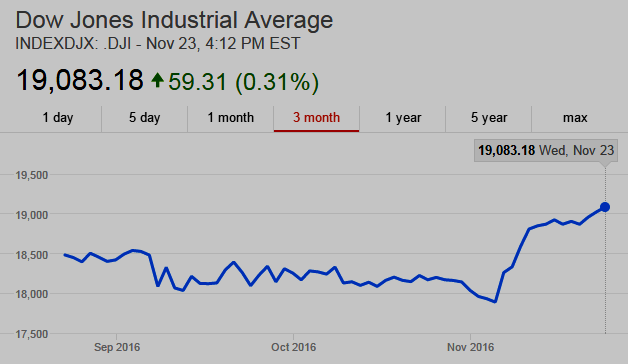 Consumer Sentiment in U.S. Jumps To A Six-Month High After Trump Election Victory: Consumer confidence in the U.S. rose 8.2 points post-election to a six-month high in November, showing Americans became more optimistic about their finances and the economy after Donald Trump won the Presidential election. Americans were heartened on the whole by Trump’s victory over Democrat Hillary Clinton, with broad gains in confidence across incomes, ages and regions, according to the survey released Wednesday by the University of Michigan, as reported by Bloomberg.com.

Sean Spicer, the Republican National Committee’s communications director, said on Monday morning’s transition update call that President-elect Trump may leave for Florida on Tuesday afternoon or Wednesday morning, and intends to spend Thanksgiving at his Mar-a-Lago Club (domain: maralagoclub.com) in Palm Beach, Florida, with his family.


Coast Guard, partner agencies to establish security zones near Palm Beach | USCGnews.com: "MIAMI – The Coast Guard is establishing security zones in the Intracoastal Waterway and offshore near Palm Beach beginning Tuesday. The security zones are scheduled to begin at 4 p.m. Nov. 22, and scheduled to continue until the afternoon of Nov. 27, to include certain waters of the Lake Worth Lagoon, Intracoastal Waterways and the Atlantic Ocean in the vicinity of Mar-a-Lago Club and the Southern Boulevard Bridge in Palm Beach. The security zone is necessary to protect the VIP and accompanying official party, the public, and the surrounding waterway from terrorist acts, sabotage or other subversive acts, accidents, or other causes of a similar nature. Entering, stopping, or anchoring in this security zone is prohibited unless authorized by the Captain of the Port Miami or a designated representative. The security zone will be broken into three zones [see map above]."