Apr 24, 2017: Watch the LIVE REPLAY of @JohnLegere and the @TMobile senior leadership team as they deliver Q1 2017 results. 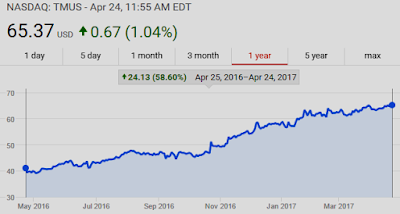 Participants have multiple ways to submit questions including via phone, Twitter (tweet using $TMUS) and Facebook (www.facebook.com/JohnJLegere via post comment). T-Mobile will also take questions via text and respond to some of them on the call (send a text message to 313131, enter the keyword TMUS followed by a space). Similar to past quarters, prepared remarks will be kept to a minimum in order to provide more time for free-flowing dialogue with analysts, investors, media and consumers.

T-Mobile Social Media: Investors and others should note that the Company announces material financial and operational information to its investors using its investor relations website, press releases, SEC filings and public conference calls and webcasts. The Company also intends to use the @TMobileIR Twitter account (https://twitter.com/TMobileIR) and the @JohnLegere Twitter (https://twitter.com/JohnLegere), Facebook and Periscope accounts, which Mr. Legere also uses as means for personal communications and observations, as means of disclosing information about the Company and its services and for complying with its disclosure obligations under Regulation FD. The information we post through these social media channels may be deemed material. Accordingly, investors should monitor these social media channels in addition to following the Company’s press releases, SEC filings and public conference calls and webcasts. The social media channels that the Company intends to use as a means of disclosing the information described above may be updated from time to time as listed on the Company’s investor relations website.

About T-Mobile US, Inc.
"America's Un-carrier"-- T-Mobile US, Inc. (NASDAQ:TMUS)--provides wireless services through its advanced nationwide 4G LTE network to 71.5 million customers. Based in Bellevue, Washington, T-Mobile US provides services through its subsidiaries and operates its flagship brands, T-Mobile and MetroPCS. For more information, visit t-mobile.com or join the conversation on Twitter using $TMUS.--source: Press Release | T-Mobile.com