1) The WHOIS Way To Lose Your Domain Names--false or erroneous (including outdated) WHOIS info--check the WHOIS or contact your registrar(s) to make sure everything is correct and up-to-date. You may be surprised--I once discovered incorrect information on a transferred domain that I believe had been erroneously entered by staff at the prior registrar. Also note that any change in your registration info may invoke a 60-day lock by your registrar due to a poorly designed ICANN policy to prevent domain name theft (check with your registrar before making any change if you need to avoid the lock)--Contractual Compliance Update | GDD Summit Madrid | Presentation | ICANN.org: 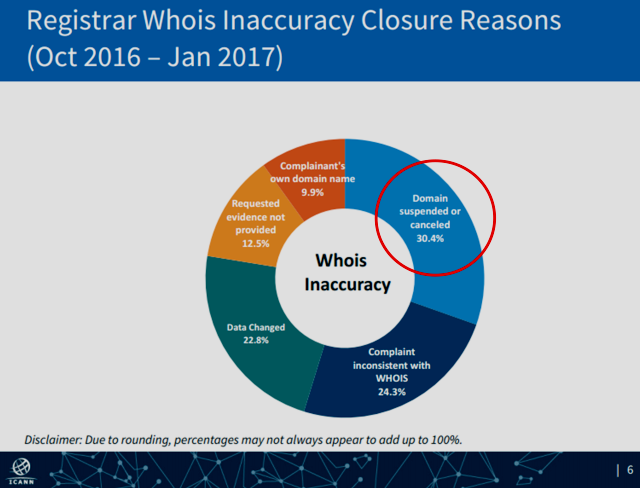 a. Deathwatch: ICANN's New gTLDs Still Losing Domain Name Registrations (source: ntldstats.com):
At this rate (a net loss of -2.1 million registrations every 6 weeks), ICANN's new gTLDs will have a total of -0- domain name registrations by Fall, 2018.

b. Neustar Loses Again, in Court: "On April 6, 2015, Neustar, Inc. (the “Company”) filed a Petition for Review asking the U.S. Court of Appeals for the District of Columbia Circuit to “hold unlawful, vacate, enjoin, and set aside” the FCC Order issued on March 27, 2015, approving a recommendation by the North American Numbering Council for a competitor to serve as the next Local Number Portability Administrator (“LNPA”) ... The Court of Appeals issued its decision on May 26, 2017. The Court of Appeals denied the Company’s Petition for Review. The Company is reviewing the decision and continuing to consider its options."--Form 8-K, May 26, 2017. The loss of the LNPA a/k/a NPAC contracts will likely have a huge negative impact on Neustar's financials. Neustar is a technology company and domain name registry services provider (.biz, .co, .us ...). As I reported May 7, 2017:


Neustar Reports Results for First Quarter 2017 | Neustar.biz: "NPAC Services contributed $128.3 million in revenue. Net income for the first quarter of 2017 totaled $45.4 million, or $0.80 per share." • How much does Neustar's NPAC Services business contribute to Neustar's bottom line (net income)? 100%? See SeekingAlpha.com. • When does that very profitable NPAC Services business end? Probably 2018. • "Neustar ended the quarter with cash and cash equivalents of $47.0 million and outstanding debt under its credit facilities and senior notes of $751.6 million ..."


"Uniregistry has announced a number of TLD price increases, taking effect on September 8th, 2017. Our main concern with this type of increase is that it has the potential to undermine consumer trust in the new gTLD program. Here’s everything you need to know, and what action we suggest you take ... 2. We will no longer support the TLDs with exponential price increase - The decision to discontinue support for these select TLDs was made to protect you [resellers] and your customers [domain name registrants] from unknowingly overpaying in a price range well beyond $100 per year. No longer supported as of September 8th, 2017"--

Having paid for our finale @INTA tickets why is EVERY venue at capacity & queuing to get in? Unacceptable. Want a refund. #INTA17
— Michele Fellows (@MicheleFellows) May 24, 2017

Even the trademark lawyers are tired and bored of ICANN's new gTLDs (lone tweet below):

But also note: Net Neutrality Ideals Are Already Dead | Bloomberg.com: "Netflix and other rich companies pay internet service providers to connect directly into the providers' broadband plumbing. These "paid peering" fees are perfectly legal even under the stricter regulations the FCC is seeking to unravel."

1. "A lot of other people are trying to be brilliant and we are just trying to stay rational. And it’s a big advantage.”– Charlie Munger
2. “People tend to act too frequently in the stock market because stocks are so liquid. There are no called strikes, so ignore people yelling at you ‘Swing you bum!’” – Warren Buffett
8. “When you go out in the world, look for the job that you would take if you didn’t need a job … You really want to think about what will make you feel good when you get older about your life, and you, at least generally, want to keep going in that direction.” – Warren Buffett