Romit Shah Says Time Is Up for Qualcomm 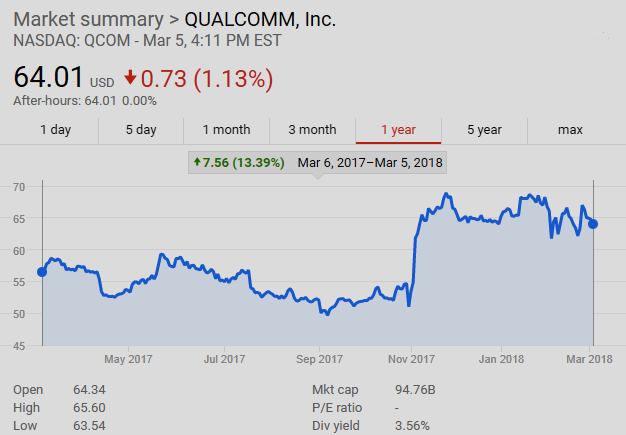 Bloomberg.com video above published Mar 5, 2018: The Committee on Foreign Investment in the U.S. (CFIUS) has launched an investigation into Broadcom's (NASDAQ: AVGO) (broadcom.com) acquisition bid for Qualcomm. Bloomberg Gadfly's Brooke Sutherland reports on "Bloomberg Daybreak: Americas." (Sutherland is a Bloomberg Gadfly columnist. The opinions expressed are her own.)

Broadcom Limited | Financial News Release: "SAN JOSE, Calif., March 5, 2018 -- Broadcom Limited (NASDAQ: AVGO) ("Broadcom") today issued the following statement: Broadcom was informed on Sunday night that on January 29, 2018, Qualcomm secretly filed a voluntary request with CFIUS to initiate an investigation, resulting in a delay of Qualcomm's Annual Meeting 48 hours before it was to take place. This was a blatant, desperate act by Qualcomm to entrench its incumbent board of directors and prevent its own stockholders from voting for Broadcom's independent director nominees ... On November 2, 2017, Broadcom made a public commitment to redomicile to the United States and this process is well underway. The SEC has cleared Broadcom's preliminary proxy statement, and Broadcom continues to expect to receive all requisite approvals to complete the process by the end of its fiscal second quarter ending May 6, 2018. Broadcom continues to pursue the redomiciliation process as expeditiously as possible. Upon completion of the redomiciliation, Broadcom's proposed acquisition of Qualcomm will not be a CFIUS covered transaction. Broadcom, which is run by a Board of Directors and senior management team consisting almost entirely of Americans, and which is largely owned by the same United States institutional investors that own Qualcomm, recognizes the important role CFIUS plays in protecting our national security, and is fully committed to cooperating with CFIUS in any review, just as Broadcom did during its prior successful acquisitions, including its acquisition of Brocade at the end of 2017 ..."

Broadcom Limited | Financial News Release Feb. 21, 2018: "Broadcom Limited (NASDAQ: AVGO) (" Broadcom ") today issued the following statement: Broadcom today reaffirms its commitment to acquiring Qualcomm , and is adjusting its offer following the Qualcomm board's decision to transfer $4.10 per Qualcomm share (or $6.2 billion of value) from Qualcomm stockholders to NXP stockholders.  Broadcom is prepared to acquire Qualcomm for $79 per Qualcomm share, consisting of $57 in cash and $22 in Broadcom shares (premised on Qualcomm's revised agreement to acquire NXP at $127.50 per NXP share) ...."