ICANN vs. EU GDPR? ICANN says it is "studying all available remedies, including legal action in Europe" after receiving the European Union's Article 29 Working Party (WP29) reply dated 11 Apr 2018 in response to ICANN's recent discussions and letters (see e.g., ICANN's letter to Giovanni Buttarelli), requesting "advice" and a "moratorium" (not granted) in regard to the EU's General Data Protection Regulation (GDPR) which becomes enforceable May 25, 2018, and imposes stiff penalties for violations by "data controllers" such as ICANN and its "contracted parties" (registrars and registry operators) who maintain the heretofore public database of WHOIS information about domain name registrants.


ICANN Receives Data Protection/Privacy Guidance from Article 29 Working Party | ICANN.org: "... we are studying all available remedies, including legal action in Europe to clarify our ability to continue to properly coordinate this important global information resource. We will provide more information in the coming days ..."--Goran Marby, ICANN President & CEO, 12 Apr 2018

Meanwhile, as a result of the aforesaid WP29 reply to ICANN, the ad hoc ICANN BC and IPC group extended the deadline to comment on its proposed accreditation and access model to next Friday, 20 April 2018 at 4PM UTC (12 PM EDT). More info here. [Editor's note: that BC & IPC proposal (pdf) appears DOA "dead on arrival" and even more deficient than ICANN's proposed Interim Model (pdf) in light of the WP29's advice above and the devastating comments already submitted by ICANN's Non-Commercial Stakeholders Group (embedded below). 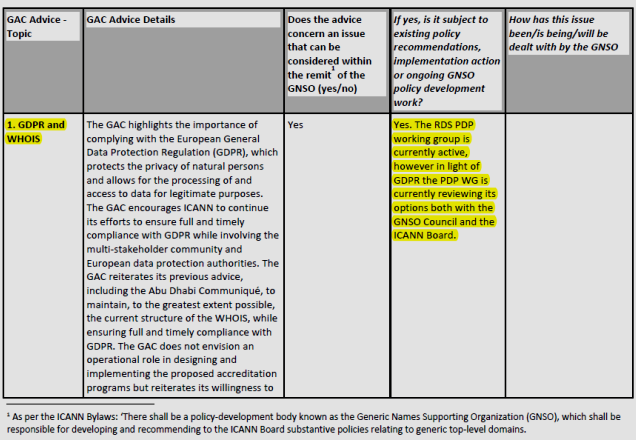 a. ICANN Organization’s Report on the Draft FY19 Budget Operating Plan Now Due 24 April |ICANN.org: 11 April 2018 - "Today, the Internet Corporation for Assigned Names and Numbers (ICANN) announced that the ICANN organization's response to the public comments received in the Draft FY19 Operating Plan and Budget has been moved from 12 April to 24 April. This will allow the ICANN org and the Board to have the appropriate time to provide thoughtful and detailed responses."

b. Fellowship Program at ICANN ​Community Consultation Process (pdf): "As guiding principles for this comment, the GNSO Council believes that: 1. ICANN needs to develop clear objectives and verifiable metrics to demonstrate the Return On Investment (ROI), if any, from the Fellowship and other similar programs in consultation with the community; and 2. ICANN needs to reconsider its expenditure on the Fellowship and other programs to reflect this ROI and assess that on an ongoing basis ..."

c. US: Federal authorities take down Backpage.com, site accused of being a haven for online prostitution | latimes.com.

d. Protecting Your Neighborhood’s Identity – Registering A Trademark | SmithAmundsen LLC | JDSupra.com: "Trademark registration of the association’s name and logo give the association increased power to protect the good name and reputation of its neighborhood or condominium ..."

e. How Did Americans Lose Their Right to Privacy? | Heartland.org

f. Is the FCC About to Get Throttled? The Likelihood of Success on Reversing Net Neutrality | Texas Lawyer | law.com: "Was the Public Comment Period Conducted in Compliance with FCC Regulations? Probably not."

5) Most read posts this past week on DomainMondo.com:

3. Hearing April 11: Facebook $FB Transparency and Use of Consumer Data

4. European Union WP29 To Facebook $FB: "Sorry Is Not Enough"