Just 1½ years after the IANA transition, the dysfunction, incompetence, and conflicts of interest, are self-evident as systemic throughout the California corporation officially known as the Internet Corporation for Assigned Names and Numbers, otherwise known as ICANN, as well as in its self-selected "ICANN community" dominated by "special interests" (trademark lawyers, corporate lobbyists, and contracted parties, i.e., domain name registrars and registry operators). Now ICANN, despite its international "global" pretensions, finds itself, inexplicably, unprepared for the European Union's General Data Protection Regulation (GDPR) which becomes enforceable May 25, 2018:


Data Protection/Privacy Issues Update 13 Apr 2018 | ICANN.org: "... On Thursday, we  received a letter [PDF, 400 KB] from the Article 29 Working Party where they provided recommendations on ICANN org's Interim Model for Compliance [PDF, 922 KB] with ICANN's agreements and the GDPR. In my reply [PDF, 313 KB] to Article 29 I again emphasize the need for additional time to further develop and implement the model, including a moratorium on enforcement until our model is in place ..."--Göran Marby, ICANN President and CEO (emphasis added)

Although everyone was given two years to prepare, ICANN's overpaid and incompetent management team, completely bungled GDPR preparations, leaving the ICANN organization and "ICANN community" scrambling to find ways to comply with the EU GDPR by May 25, 2018, now less than five weeks away. In response to the increasing alarm and anxiety, the ICANN Board of Directors indicated to the GNSO Council leadership team and the RDS PDP WG (RDS) leadership team on April 11, 2018, that the ICANN Board of Directors is considering a temporary policy/specification as outlined in the RAA Consensus Policies and Temporary Policies Specification as one possible means of implementing an ICANN interim GDPR compliance model (for registry operators see "Temporary Policies" on page 43 (of 99) of the ICANN Registry Agreement (pdf) approved July 31, 2017). Here's the complete note circulated by GNSO Council leadership:
https://gnso.icann.org/sites/default/files/file/field-file-attach/gnso-gdpr-rds-briefing-13apr18-en.pdf


"The document also contains serious biases and preconceptions which are wrong and will not fly and we are running the serious risk of reproducing something so close to the Applicant Guidebook of 2012 that the world at large will be incredulous. The 2012 exercise produced results which are not acceptable internationally, certainly not to be repeated."--emphasis added, see full quote below. 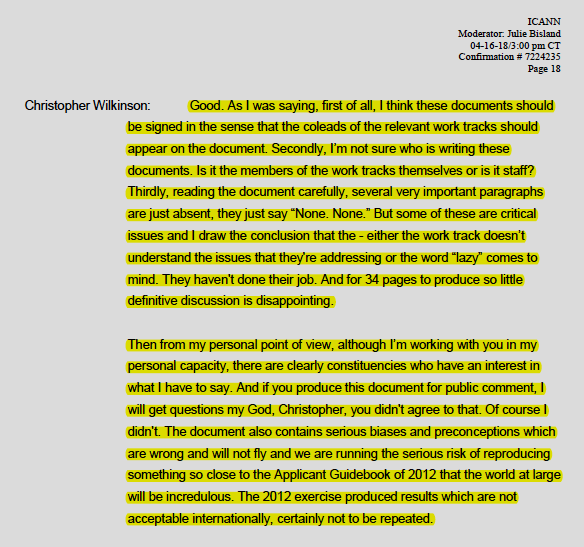 [Editor's note: it appears dysfunctional and inept, if not corrupt, ICANN, is on track to produce another severely flawed round of new gTLDs plagued with the same defects and mistakes as last time. The sole objective appears to be to generate more money via new gTLDs' consumer fraud and ICANN's .BRAND "extortion racket" (pdf).]

[Editor's note: U.S. government interference in ICANN affairs? Run it through the GAC, David, and get your unanimous consensus, before telling ICANN what to do, otherwise you are setting a precedent for China or Russia or Iran, to write their own letters "requesting" ICANN do something which you may not like.]

Goodbye Neustar $$: Neustar (domain: home.neustar), a top-level domain (TLD) registry services provider and technology company, which once was publicly traded (NYSE: NSR) but now is privately held by Golden Gate Capital and Singapore's sovereign wealth fund, has lost its lucrative, high-margin NPAC contracts which are now transitioning to the new provider iconectiv.com (part of Telcordia Technologies, Inc., U.S. subsidiary of Sweden's Ericsson)--"The Southeast Number Portability Administration Center (NPAC) Region, the largest of the seven U.S.regions, was transitioned on April 8, 2018. This was the first regional cutover of NPAC data and services and it followed the successful transition of Ancillary Services on March 4, 2018.  The Southeast Region includes Alabama, Florida, Georgia, Kentucky, Louisiana, Mississippi, North Carolina, South Carolina, Tennessee, Puerto Rico, and the U.S. Virgin Islands. The remaining regions are scheduled to cutover on May 6, 2018 (for the Mid-Atlantic, Midwest, and Northeast Regions) and May 20, 2018 (for the Southwest, West, and West Coast Regions)"--via FCC.gov April 12, 2018.

Just how much $$ will Neustar lose?
"Once the [NPAC] contracts terminate, our annual revenue will decrease by approximately $500 million ... At the time of termination, our revenue and profitability will be dependent upon the success of our remaining business. If we are not able to replace this lost revenue and adjust our operating plans to support our remaining business, our total revenue and profitability may be materially adversely affected."--Neustar 10-Q, Oct 29, 2015 (emphasis added).

One analyst at that time wrote: "... there's good reason to believe the said contract represents NSR's [Neustar's] entire EBITDA profitability ... NSR isn't yet fully ready to recognize just how much profitability it stands to lose (hint: all of it)... NSR was charging nearly $500 million per year for something which is now being awarded ... for 7 years (at $142.9 million per year) … a reflection of the massive margins NSR is realizing on this contract ..."

Editor's note: the "new Neustar" is about to become a mere shadow of its former self. Neustar, which does business as Neustar Inc. and ARI Registry Services, is the largest new gTLDs backend registry services provider according to ntldstats.com/backend, but has been losing backend registry service contracts--Australia's ccTLD .au to Afilias beginning July 1, 2018, as well as some of the many terminated .BRAND new gTLDs.

a. ICANN people think they are rock stars spending millions on meetings around the world! | OnlineDomain.com

e. Surveillance firm Terrogence, a US government vendor, has been building a massive facial recognition database from photos on Facebook, YouTube, and other sites--Forbes.com

5) Four Most Read Posts this past week on DomainMondo.com: