VeriSign (VRSN) Q1 2018 Results - Earnings Call Transcript | SeekingAlpha.com excerpt: "At the end of March, the domain name base in .com and .net totaled 148.3 million, consisting of 133.9 million names for .com and 14.4 million names for .net ... we believe that the renewal rate for the first quarter of 2018 will be 74.9%. This preliminary rate compares to 72.5% achieved in the first quarter of 2017. We now expect full year 2018 domain name base growth of between 2.5% and 3.25%, with an increase to the domain name base for the second quarter of 2018 of between 0.7 million to 1.2 million net registrations. I also want to report that we are engaged in the dialogue with NTIA concerning the Cooperative Agreement which is ongoing, but beyond that we don't have more to say at this time ... we're engaged in ICANN's process to move the delegation forward for [new gTLD] .WEB. That's ICANN's process, so we can't say when it'll conclude. Just as a reminder to, for all of you looking at the guidance of course, while it's possible that we'll – our operation of .web will start this year. We did not include – the 2018 revenue guidance provided does not include any revenue from .web, and we'll give you more update as available, but unfortunately that's all I can give you now..."--D. James Bidzos, Verisign Chairman, President & CEO (emphasis added).

Financial Highlights • On Feb. 15, 2018, Verisign called for the redemption of all its outstanding subordinated convertible debentures, with a redemption date of May 1, 2018. If holders elect to convert their debentures, Verisign will settle the principal amount, up to $1.25 billion, in cash and the remaining value through the issuance of shares of Verisign’s common stock. • Verisign ended the first quarter with cash, cash equivalents and marketable securities of $2.4 billion, a decrease of $58 million from year-end 2017. • During the first quarter, Verisign repatriated $1.15 billion of cash held by foreign subsidiaries, net of foreign withholding taxes. • Cash flow from operating activities was $90 million for the first quarter of 2018, compared with $148 million for the same quarter in 2017. The first quarter 2018 amount reflects approximately $61 million in withholding taxes paid in connection with the repatriation. • Deferred revenues on March 31, 2018, totaled $1.03 billion, an increase of $27 million from year-end 2017. • During the first quarter, Verisign repurchased 1.1 million shares of its common stock for $125 million. At March 31, 2018, $938 million remained available and authorized under the current share repurchase program which has no expiration. • For purposes of calculating diluted EPS, the first quarter diluted share count included 25.6 million shares related to the subordinated convertible debentures, compared with 21.3 million shares for the same quarter in 2017. 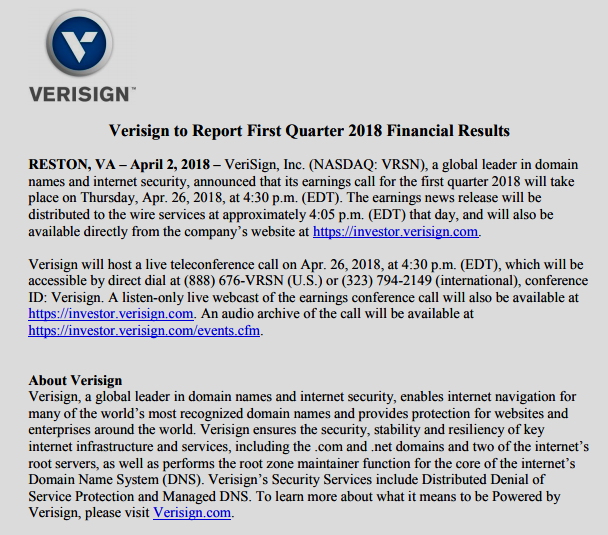