Alibaba IPO One Year Out, A Look Back and Where We Are Now (video) 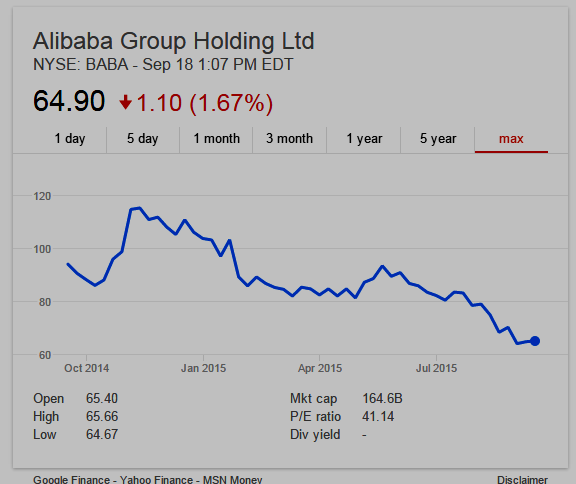 Above: stock chart of NYSE: BABA (Alibaba Group shares) (source: google.com, Sept 18, 2015)
"... at closing time, on the date of its initial public offering (IPO), 19 September 2014, Alibaba's market value was measured as US$231 billion... the pricing of the IPO ... later increased to US$25 billion, making it the largest IPO in history. However, buyers weren't purchasing actual shares in the group, since China forbids foreign ownership, but rather just shares in a Cayman Islands shell corporation..." (source: Wikipedia, emphasis added)

According to Bloomberg Business (August 31, 2015):
Lock-up expiration: As reported by Bloomberg on Sept. 3, 2015, Alibaba Group Holding Ltd. Chairman Jack Ma and Vice Chairman Joseph C.Tsai plan borrow more than $2 billion through a margin loan pledged against their Alibaba stock--the lockup period on Alibaba stock owned by Ma (7.6%)  and Tsai (3.1%) expires on Sept. 21. 2015--Tsai said publicly on the last earnings call that he and Ma will not be selling shares at the lockup expiration. Reportedly the money raised may be used to fund Blue Pool Capital Ltd., the family office of Alibaba founders set up by Tsai and Alexander West in 2004. Former Citadel Managing Director Oliver Weisberg was hired this year to co-run the firm, which has also brought in Sydney Zhang, a former allocator from the Chinese foreign exchange regulator, to lead hedge-fund investments. Credit Suisse Group AG, Goldman Sachs Group Inc. and Morgan Stanley are among banks reportedly working on the transaction. Bank fees on these kinds of deals are reportedly "lucrative." Ma is China’s second-richest person with a net worth of $29.5 billion, while Tsai has a $4.4 billion fortune, according to the Bloomberg Billionaires Index.

Sept 17, 2014: NSBO Head of China Research Miranda Carr discusses the coming Alibaba IPO and what to keep in mind when using their ecommerce business. She speaks with Ryan Chilcote on Bloomberg Television's “The Pulse.” (Source: Buyer Beware When Using Alibaba: Carr: Video - Bloomberg)

"NSBO is a specialist FCA-regulated investment bank with a strong focus on China, event-driven strategies and ETF execution. We have offices in London and Beijing. The Beijing office produces in-depth policy-driven macro research on China and its growing influence on the global economy. Our Corporate Finance team advises on M&A and fund raising transactions, utilising NSBO's networks in the UK, China, North America and the rest of the world. Our execution desk covers all major markets around the clock. We are dedicated to helping our clients attain the best possible results, whatever their needs. For an overview of our China Research product and capabilities click here  [China’s Effect on the World - How Government Policy Impacts Investors (pdf)]." (source: nsbo.com)