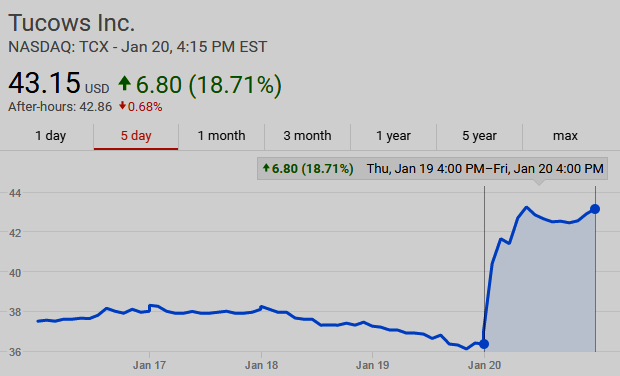 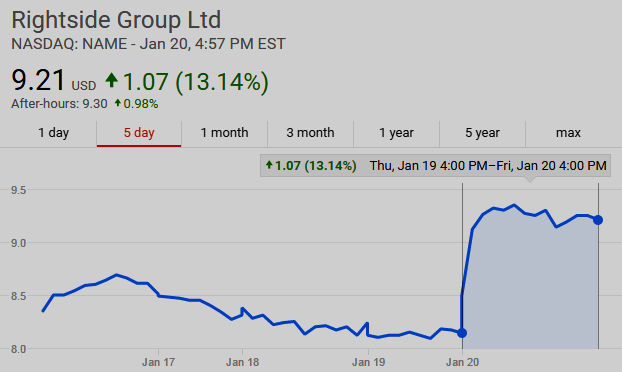 "These two businesses have been competing for over 15 years. We know and respect each other. Each business also has particular strengths. Following completion of the transaction, we will continue to operate the acquired eNom properties under their current brands and we’ll maintain the existing reseller APIs, as well as the eNom accreditation, which means there will be no bulk migration of names required. We will also maintain the Seattle office."--Tucows CEO Elliot Noss, Conference Call Jan. 20, 2017. See also Tucows SEC filings.

Tucows' CEO Elliot Noss acknowledged eNom's growth prospects were neutral to negative but cited anticipated cost synergies over the next 24 months and the deal's additional cash generation as justification for the acquisition in a conference call and webcast Friday which is available for replay. 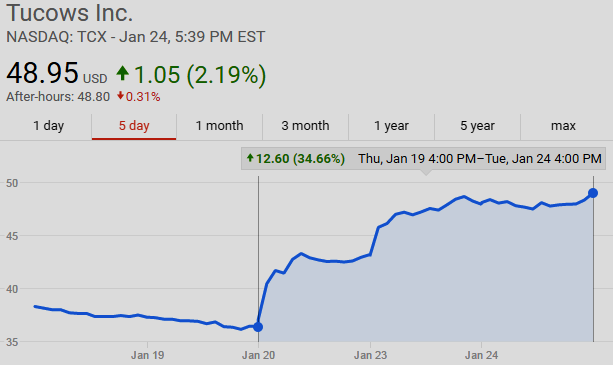 What's in the deal for Rightside? Besides the press release which cited the "divestiture" as enhancing "Rightside's ability to make additional investments in the Registry business as the market for new domains continues to develop," we may know more after the Rightside conference call and audio webcast with investors and analysts Monday, January 23, at 4:30 p.m. ET (1:30 p.m. PT): LIVE webcast

Rightside's filing with the SEC in connection with the deal stated, in part:


"On January 20, 2017, Rightside Group, Ltd. (“Rightside” or the “Company”) and its wholly owned subsidiaries, Rightside Operating Co. (“Seller”) and eNom, Incorporated (“eNom”) entered into a Stock Purchase Agreement (the “Purchase Agreement”) with Tucows Inc. (“Tucows”) and Tucows (Emerald), LLC, a wholly-owned subsidiary of Tucows Inc. (the “Purchaser”), pursuant to which the Purchaser will purchase Rightside’s eNom business through the purchase of all of the outstanding stock of eNom from Seller in exchange for $83.5 million, less a net working capital adjustment of $6.8 million, resulting in net cash at closing of $76.7 million (the “Transaction”). The purchase price is subject to customary adjustments following the closing, including a working capital adjustment to the extent such amount is greater or less than the estimated net working capital amount determined at closing. At the closing, the Company will pay transaction expenses of approximately $4.0 million and substantially all of its existing indebtedness. The transaction is expected to close on January 20, 2017."

" ... On January 20, 2017, the Company entered into a Limited Consent and Amendment No. 4 to Credit Agreement (the “Amendment”) by and among the Company, its domestic subsidiaries Rightside Operating Co. and eNom (together with the Company, the “U.S. Borrowers”), its foreign subsidiaries DMIH Limited, United TLD Holdco Ltd. and Rightside Domains Europe Limited (collectively the “Non-U.S. Borrowers” and together with the U.S. Borrowers, the “Borrowers”), Hot Media, Inc. and Acquire this Name, Inc., as guarantors, and Silicon Valley Bank (“SVB”), as lender and collateral agent. The Amendment revises the terms of the Company’s existing Credit Agreement, dated as of August 1, 2014, as amended (the “SVB Credit Facility”), by and among the Borrowers and SVB, which provided a $30.0 million revolving loan facility with a $15.0 million subfacility for the issuance of letters of credit. The Amendment, among other changes, releases eNom as a party to the SVB Credit Facility and the assets sold in the Transaction from the collateral securing the obligations under the SVB Credit Facility; suspends the availability period for revolving loans, requires the Company to repay the outstanding revolving loans in full and reinstates the availability period once the Company satisfies certain conditions, including further amendments to the SVB Credit Facility and delivery of projections giving effect to the Transaction; lowers the total commitment from $30.0 million to $15.0 million; suspends the application of the financial covenants until the availability period for revolving loans is reinstated; and amends the financial covenants that will have effect once the availability period for the revolving loans is reinstated, including the maximum consolidated net leverage ratio, minimum liquidity ratio and minimum consolidated EBITDA. The Amendment further consents to the Transaction."

Friday's closing price on Rightside ($NAME) gave it a market capitalization of $178.9 million. Rightside stated Friday in its press release: "Following the transaction, Rightside will be in a strong financial position with approximately $90 million in cash on its balance sheet."  Subtract the $90 million in cash, and the market is valuing Rightside's remaining businesses, principally Name.com registrar and Rightside registry (new gTLDs), at $88.9 million. In July, 2016, Rightside rejected an unsolicited offer from privately-held Donuts to buy Rightside's new gTLDs for $70 million in an all-cash deal.

•   It doesn't matter how many new gTLDs ICANN creates because We're Going to Run Out of Company Names | Bloomberg.com: "There is a numeric limit to the universe of names, the combinations of letters of five syllables or less that are pronounceable, avoid offense in principal languages, and are not someone else’s property."

•   Select ICANN officers and staff may have been busy partying this past week in Davos at the World Economic Forum as in past years when Fadi Chehade was ICANN President and CEO. The ICANN website offered little new "news" and, e.g., the Litigation Documents page has not been updated in weeks.

•  Senator Ted Cruz (R-TX) has not forgotten about ICANN and the IANA transition, nor China, free speech, and tech, raising those issues at the confirmation hearing of  Wilbur Ross, Trump's pick for Commerce Secretary, this week (2:50:33-2:52:52):

•  Turkey Moves to Block Internet Access | voanews.com: "analysts and civil society organizations say the Erdogan administration has begun moving aggressively to restrict internet and mobile phone access to the rest of the web — and for the first time, is showing no signs of backing off any time soon." See also: Turkey Increases Internet Restrictions | voanews.com.

•  John McAfee’s 3 major cybersecurity predictions for 2017 (via CSOOnline.com):
1. IoT denial of service attacks on major internet companies, like the one carried out on Dyn earlier year will become commonplace, and the severity will be orders of magnitude greater than what we have seen;
2. The anti-virus paradigm will finally been seen as a dead paradigm ... the world must move to proactive systems;
3. Intelligence agencies will finally accept the fact that a sophisticated nation state can perpetrate any hack and make it point to any nation or agency that they choose.