In the video above published January 12, 2017, MSNBC.com's Morning Joe program hosts Joe and Mika, and guests, discuss the loss of trust and credibility in the U.S. intelligence community, and the apparent 'corrosive' relationship with President-elect Trump due to the politicization of the CIA and other intelligence agencies, and inappropriate (if not illegal) leaks, all of which have been used by media to whip up hysteria over Russia and Vladimir Putin, including stories published by Buzzfeed and CNN about a "dossier" which was compiled, and paid for, apparently, by supporter(s) of Hillary Clinton and anti-Trump Republican(s). Unfortunately, for some unexplained reason, the said "dossier" or "summary" was also reportedly appended to a briefing given to Obama and Trump and select members of Congress by the U.S. intelligence community even though none of its allegations have been proven, and in fact, some have already been proven false. 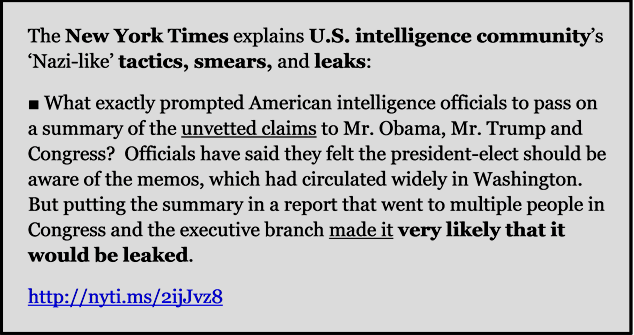 Below is the statement issued by James R. Clapper, Director of National Intelligence (highlighting and emphasis added): 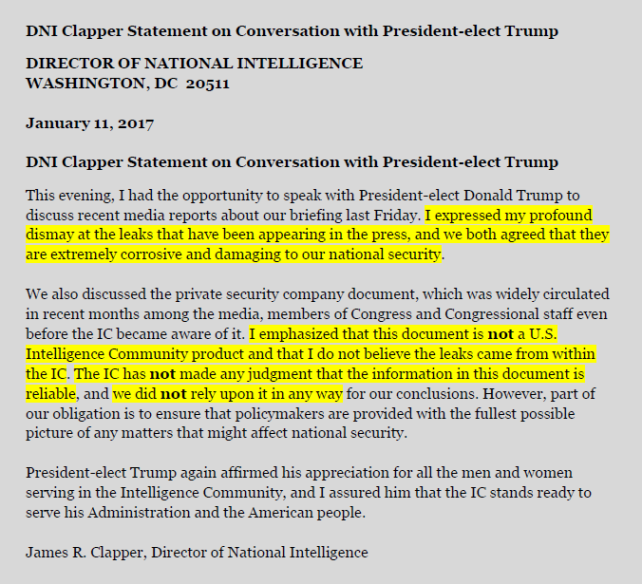 The Deep State goes to war with President-elect, using unverified claims, as Democrats cheer https://t.co/NPWXMS5gPx by @ggreenwald #Trump
— Under My Palm (@UnderMyPalm) January 14, 2017

The Fake News "Dossier" backstory according to reports in the New York Times and Mike Allen in Axios.com:


The former MI6 British spy behind the Trump smear, Christopher Steele, was hired by FusionGPS.com, a Washington firm headed by former WSJ reporter Glenn Simpson, according to a NYTimes.com front-page story. The story began in September 2015, when an unknown wealthy Republican donor who strongly opposed Mr. Trump put up the money to hire Fusion GPS to compile a "dossier" about Trump's past scandals and weaknesses. For months, Fusion GPS purportedly gathered documents and put together files from Mr. Trump's past in business and entertainment. After Mr. Trump emerged as the presumptive nominee in the spring, the Republican interest in financing the effort ended, but Democratic supporters of Hillary Clinton were very interested, and Fusion GPS kept doing the same deep dives on behalf of their new clients. Also noted, Neil King, a journalist at the WSJ and husband of Shailagh Murray, a senior Obama adviser, just took a job with Fusion GPS.

UPDATE 16 Jan 2017: Christopher Steele, Ex-Spy Who Compiled Trump Dossier, Goes to Ground | NYTimes.com: "An investigator for a business research firm in London similar to Orbis [domain: orbisbi.com], who knows the work of the company but who has met Mr. Steele only briefly, said he was not impressed by the dossier. “I have a lot of experience in this world,” he said. “If I were the client, I would throw it back and say, ‘Where’s the evidence guys? I can’t use this.’ "

The effects of the U.S. intel community's tactics, leaks, smears and/or mishandling of the so-called "dossier" have now had a negative impact on markets, with major U.S. indexes closing down on Thursday, January 12, 2017:
This story appears to have "legs" and may have continuing negative effects on markets. Other news media have now published in-depth stories about the "dossier" including the Wall Street Journal (wsj.com) and Bloomberg (bloomberg.com). Below are a mix of videos from other news sources:

Trump dossier: US Intelligence distances itself from document:

Video above published on Jan 12, 2017, by Sky News (news.sky.com): The US Director of National Intelligence says he does not "believe" that a "dossier" containing claims about Donald Trump was leaked from within the intelligence community.

Kellyanne Conway: It's an internet report, not an intel report:

The distrust between Trump and U.S. Intel Community

Video above published Jan 12, 2017, by FoxBusiness.com: Former CIA Officer Buck Sexton on the growing divide between President-elect Donald Trump and the intelligence community.

Due to the toxic atmosphere in the U.S., particularly since the November 8th election, engendered by the Washington D.C. establishment, including the U.S. intelligence community led by Obama's Democratic political appointees, as well as the post-election hysteria whipped up by the liberal-biased mainstream media, one can not rule out the possibility that Trump's life may be in danger. Any attempt to take the life of the President-elect could have negative effects on markets. Caveat Emptor.