"China’s internet policy may be a forerunner of a federated, loosely connected set of national internets called “the splinternet.” This future potential state of affairs would be characterized by digital borders that are meant to protect both real and cognitive sovereignty while keeping out unwanted foreign competition or influence. In this way, rather than the global village envisaged by the 20th-century counterculture, the mid-21st century internet might actually turn out to be a federation of loosely connected national platforms closely aligned with state power. On its surface, the splinternet may resemble today’s open internet, and would probably run on the same technologies and protocols. But the access and trade policies of individual states will combine to create wildly different experiences for users across different countries, with less exchange between regional internets."--"former open web booster" Ben Moskowitz, in Quartz (qz.com), infra (emphasis and first link added)

[Domain Mondo Editor's note (hereinafter Editor's note): We live in strange times. Unlike most in the U.S. financial and technology sectors who have largely adjusted and adapted to the Trump Presidency, many Hillary Clinton supporters in the media and political spheres are still in a funk over last year's Presidential election results, perhaps consumed by their Trump Derangement Syndrome fed by "false news" spread by mainstream media, and are now attacking the free and open internet like Mr. Moskowitz--The reasons why a free and open internet could spell the web’s downfall | Internet freedom may not be the safest future: Instead, nations could consider "the splinternet" to protect their digital borders | Quartz | qz.com--apparently, the price of an open, free-flow-of-information internet now strikes certain American political and media elites on the left as "too high." Facebook, Twitter, and Google appear willing to "fall in line." Should anyone be surprised if ICANN follows behind? If so, pity the multitudes of struggling new gTLD registry operators who all thought they were going to get filthy rich off ICANN's new gTLDs program--optimism bias knows no bounds--and all those suckers who bought new gTLD domain names, or even worse, bought and are using their own .BRAND new gTLDs, when they get hit by the "Chinese internet governance model" in multiple countries, each with their own laws, rules, TLD filtering, taxes, fees, and tolls. Only the strong will survive.]

In the meantime, one comment has already been received from George Kirikos and published by ICANN, which provides detailed pricing information undisclosed by ICANN--excerpt:

[Comments-net-renewal-20apr17] Prices could be $14.52/yr in 2023! Opposed to .NET renewal with 10% annual price increases. Contract should be tendered, to foster competition | mm.icann.org:

".... After 6 more years of 10% annual price increases, [.NET]consumers could be facing registry fees of:
2018: $9.02/yr
2019: $9.92/yr
2020: $10.91/yr
2021: $12.00/yr
2022: $13.20/yr
2023: $14.52/yr  (of course, those are the fees to registrars, who would then pass them along to consumers with an additional margin; registrars face competition amongst other registrars). Compared to $2/yr, a $14.52/yr fee on 15 million domains represents a loss to consumers of $187.8 million PER YEAR ($12.52/yr x 15 million).Obviously these allowed price increases are untenable. Compared to the $4.95/yr starting point 6 years ago, in 6 years consumers could be facing prices that are 193% higher (i.e. comparing $14.52/yr to $4.95/yr), when all other technology costs (hosting, bandwidth, storage costs, computing) have been decreasing. All other technology costs face competition, whereas ICANN protects Verisign from competition, harming consumers in the process. As ICANN appears incapable of negotiating in the public interest, it is time for this anti-competitive and anti-consumer contract to be set aside on anti-trust grounds by the relevant national authorities." (emphasis added)

[Editor's note: also note that ICANN receives a $0.75 fee which must be added to the pricing of each .NET domain name provided above. Compared solely to the unfettered pricing, "rape and pillaging" of domain name registrants and the global domain name marketplace that ICANN enables and permits of its new gTLDs' registry operators, the proposed .NET contract is an improvement when it comes to consumer (registrant) protection. Just think if ICANN had extended the new gTLDs' pricing policies to .NET? Of course most of us know ICANN is incompetent (at best), as ICANN has never instituted competitive bidding with maximum fee schedules for renewal of any gTLD registry agreement even though that is exactly what the U.S. Department of Justice (DOJ) Antitrust Division recommended in 2008 (and ICANN rejected) for ICANN's new gTLDs program. As I have noted before, ICANN is a global public interest #FAIL, and does not operate gTLDs in the interests of registrants (consumers) even though the US DOJ told ICANN it was ICANN's obligation to do so. Domain name registrants (consumers) would be better served if ICANN were abolished and all gTLDs transitioned to ccTLDs with each government providing consumer protections pursuant to a new international treaty on TLDs.  The uncomfortable truth is that we're all screwed if the Cooperative Agreement between the U.S. government and Verisign on .COM pricing is not extended beyond November 30, 2018. .COM is the global gold standard among all TLDs (top-level domains), in part because it is the world's only open* gTLD that comes with a pricing guarantee backed by the U.S. government. Verisign would be stupid to let go of that "competitive advantage." *Anyone, anywhere in the world, can register a .COM domain name, and is protected by the .COM pricing guarantee in Amendment 32 and Amendment 34. As noted by George Kirikos in his .NET comment above, ICANN management and staff are"incapable of negotiating in the public interest" which means ICANN should never be allowed to replace the U.S. government role in .COM pricing. Final caveat: this proposed .NET Registry Agreement demands close scrutiny by not only .NET registrants, but also .COM registrants. As I already noted above, I will have more to say in a future posting.] 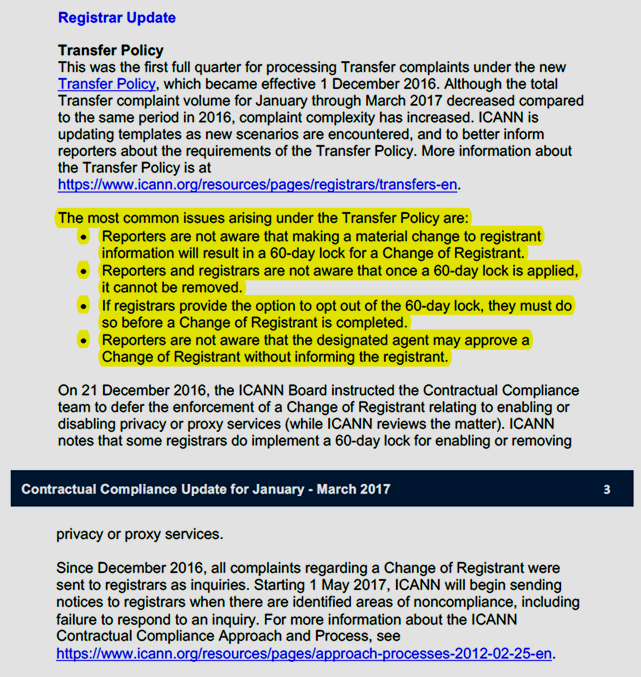 This coming week on Domain Mondo: