NASDAQ: NFLX: Netflix shares are up over 63% over the past year through last Friday: 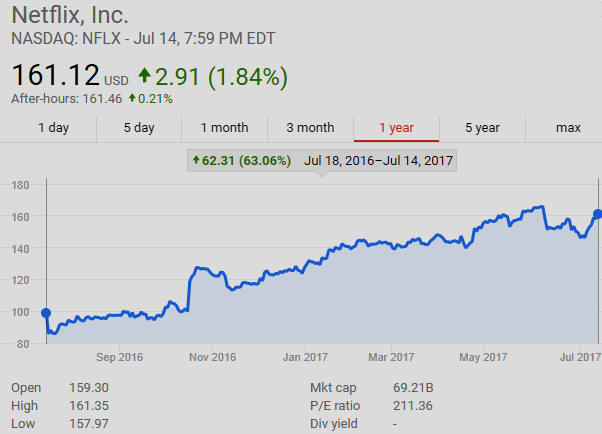 Netflix, Inc. is the world's ninth-largest internet company by revenue. Founded on August 29, 1997, Scotts Valley, CA, by Reed Hastings and Marc Randolph, Netflix is an entertainment company that specializes in and provides streaming media or video-on-demand (VOD) online, as well as still providing its legacy business of DVDs by mail.

When Netflix reports its second quarter earnings, shareholders will closely look at how many subscribers the world’s largest video streaming service was able to add in the U.S. and internationally. According to Netflix, the biggest driver of subscriber additions is the company’s exclusive original content. And, at least according to the Academy of Television Arts & Sciences, the company has been doing a great job with its own TV shows. Netflix has established itself as a household name for quality content: