Video above published by ICANN on June 27, 2017: Verisign's Chuck Gomes, Chair of the PDP (Policy Development Process) Working Group on the Next-Gen Registration Data Services (RDS) to replace WHOIS. Chuck explains what some of the Working Group's struggles are and how the ICANN59 Cross-Community Session helped explain the complexity of this topic. (Note: Chuck is retiring from Verisign but will continue as Chair of the Working Group). 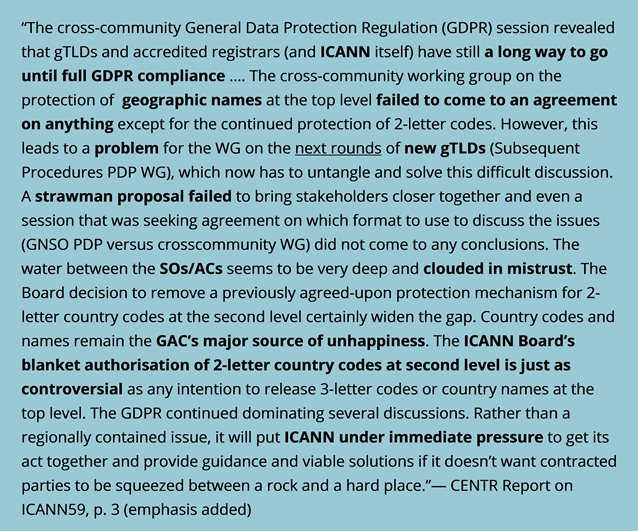 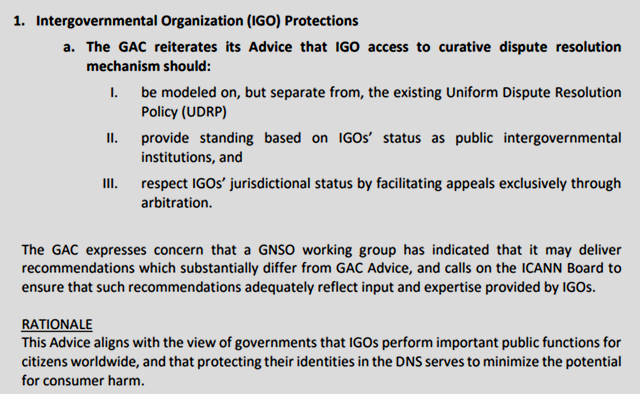 As is its usual practice and custom, the ICANN Board met in a closed meeting to approve the renewal of the .NET registry agreement with Verisign--reporting days later the dastardly deal--Adopted Board Resolutions | Regular Meeting of the ICANN Board June 24, 2017 | ICANN.org: "... Resolved (2017.06.24.22), the proposed .NET Renewal Registry Agreement is approved and the President and CEO, or his designee(s), is authorized to take such actions as appropriate to finalize and execute the Agreement ..." [including $0.75 fee to ICANN (vs. $0.25 for most other gTLDs) & 10% annual increases (10% compounded annually) in fees to Verisign]--see my comment and objections and the other comments and objections here. ICANN's Unmistakeable Message to Registrants:

If you don't like ICANN's monopolistic crony capitalism, the "presumptive right of renewal" and sweetheart deal the ICANN organization gave away to Verisign re: .NET (doubling Verisign's fees every 7 years into perpetuity), as well as imposing ICANN fees that are 3x other gTLDs), too bad! Dump ALL your .NET domain names!

The .NET tragedy is symptomatic of all that is so wrong with ICANN--corrupt, inept, or dysfunctional. And the deal ICANN gave away to the new gTLDs registry operators is even worse! (for registrants). Consumer (registrant) protection is almost completely disregarded in the entire ICANN ecosystem, something the U.S. Department of Justice Antitrust Division noted in 2008. ICANN operates almost completely counter to the ideals and values promulgated in RFC 1591 by Jon Postel in 1994.

"I am resigning as a member of the Review Team effectively immediately.  Do not associate my name with the Review Team's report."--Stanley M. Besen, Senior Consultant, Charles River Associates, June 25, 2017.

Each ICANN Meeting (three a year), costs ICANN, on average, US$4 million (pdf), including about US$1 million in airfares, hotels, and $$ per diem for hundreds of select stakeholders / attendees a/k/a "ICANN insiders" who have largely been "captured" by the ICANN organization itself to represent and defend ICANN as its self-designated "ICANN community," as opposed to the broader "global internet community" a/k/a "global multistakeholder community." Unlike ICANN's "contracted parties" (registrars and registry operators), and ICANN's periodic self-serving statements notwithstanding (in ICANN talk is cheap), domain name registrants have little representation and voice within the "ICANN community." There is no "Registrants Stakeholder Group" in ICANN. By intentional design of ICANN structures, domain name registrants (except corporations and trademark holders) are mostly excluded and marginalized by ICANN which claims to be operating in the "global public interest."

e. Thick WHOIS Transition Update | ICANN.org June 30, 2017:  "... the ICANN organization approved Verisign's request for a 120-day extension of the 1 August 2017 date in the Thick WHOIS Transition Policy by which Verisign is required to deploy an Extensible Provisioning Protocol (EPP) mechanism and an alternative bulk transfer mechanism for .COM and .NET for registrars to migrate registration data for existing domain names. With this extension, the new date for Verisign's compliance with the requirement is 29 November 2017."  See also: Letter from Verisign's Patrick Kane to Akram Atallah | ICANN.org June 20, 2017--issue: Thick Whois for .COM and .NET--kane-to-atallah-20jun17-en.pdf (3.7 MB) requesting "an extension of the August 1, 2017 date of no less than 120 days."


7) This past week's most read posts (# of pageviews Sun-Sat) on DomainMondo.com: