Amazon Announces Public Hunt for New Headquarters
Video above published Sep 7, 2017, by Bloomberg.com: Amazon.com Inc.,  (NASDAQ: AMZN), is breaking from its history of secret expansions with a public hunt for a second headquarters, spurring quick interest from cities eager to land a workforce of as many as 50,000 people. Bloomberg's Gerrit De Vynck and Shira Ovide, a Bloomberg Gadfly columnist, have more on "Bloomberg Technology." Ovide's opinions are her own (not Bloomberg's).

Amazon.com Inc. Press Release: "Sep. 7, 2017—Amazon today announced plans to open Amazon HQ2, a second company headquarters in North America. Amazon expects to invest over $5 billion in construction and grow this second headquarters to include as many as 50,000 high-paying jobs. In addition to Amazon’s direct hiring and investment, construction and ongoing operation of Amazon HQ2 is expected to create tens of thousands of additional jobs and tens of billions of dollars in additional investment in the surrounding community. Amazon is opening the Amazon HQ2 Request for Proposal (“RFP”) now, and local and state government leaders interested in learning more about how they can bring Amazon to their community can visit www.amazon.com/amazonHQ2. Amazon estimates its investments in Seattle from 2010 through 2016 resulted in an additional $38 billion to the city’s economy – every dollar invested by Amazon in Seattle generated an additional 1.4 dollars for the city’s economy overall. Details of Amazon’s Seattle headquarters ..." (go to link above for more info)(link and emphasis added).

See also: Two Very Different Stories About Amazon: "The best thing since credit cards or the next Sears?"--Bloomberg.com

2)  Why Hurricane Harvey Won't Slow Down Houston: "... The economic forces favoring a quick recovery are just too strong ... Houston is a tech cluster ... the center of the U.S. energy industry, which has gone increasingly high-tech in the past few decades. The city probably is home to more engineers than any other in the country. The same pool of skilled employees that sustains Houston’s energy industry makes it appealing to other knowledge-based sectors as well ..."--Bloomberg.com

See also: Hurricane Irma is not expected to disrupt banking in Florida, even if a lot of bank branches shut down during the storm. Leaders of institutions such as CenterState Bank Corp. and Seacoast Banking Corp. of Florida told American Banker that technology, including the ability to deposit and withdraw money electronically, will keep business on track.--South Florida Business Journal | bizjournals.com

3)  Leading Cloud Providers Run Away with the Market--Synergy Research Group | srgresearch.com: Amazon ended June with 34% of the cloud services market compared to 11% for Microsoft and 5% for Google, according to Synergy Research: 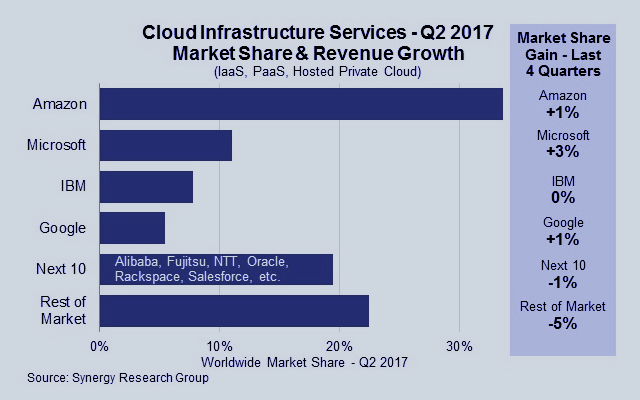 Synergy estimates that quarterly cloud infrastructure service revenues (including IaaS, PaaS and hosted private cloud services) have now reached almost $11 billion and continue to grow at over 40% per year. While AWS (Amazon Web Services), Microsoft and Google are the lead providers in IaaS/PaaS, IBM continues to lead in hosted private cloud. Alibaba has now become the fourth ranked provider in IaaS with very strong growth in China and aggressive expansion abroad.


“While Microsoft Azure and Google Cloud Platform are doubling in size, IBM continues to dominate in hosted private cloud and AWS is still over three times the size of its nearest competitor. Some of the numbers are actually pretty spectacular. The year-on-year market growth rate is nudging down as we expected in such a large market, but it remains at comfortably over 40% and AWS alone generated revenue growth of $1.2 billion over the last four quarters.”--John Dinsdale, Synergy Research Group Chief Analyst and Research Director