Yes, we know about that September 12 event in Cupertino: the 10th anniversary of Apple's iconic iPhone celebrated with a first-ever event at the new Steve Jobs Theater on the Apple Park Campus at 10am PDT (1pm EDT) reportedly introducing the OLED iPhone X, iPhone 8 and iPhone 8 Plus with LCD displays, Apple Watch with LTE, 4K Apple TV with HDR, and more, but for investors, analysts, traders, speculators, and more, there is another event also worth paying attention to: 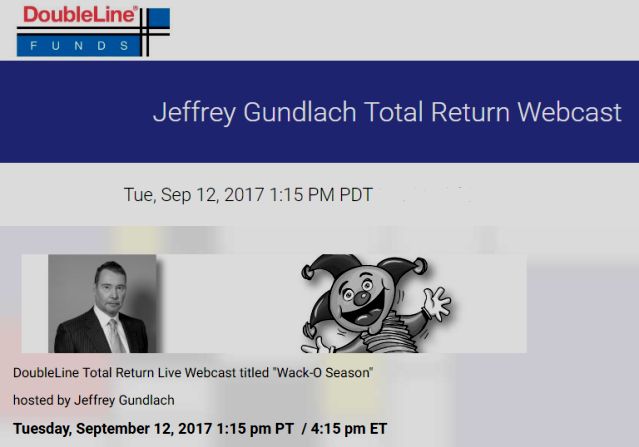 This webcast should be especially entertaining and informative due to a recent Wall Street Journal report which Gundlach has characterized as "fake news."

If you don't know who Jeffrey Gundlach, sometimes referred to as "the Bond King,"  is, read this brief profile on Wikipedia.org.

The most recent performance for all DoubleLine Closed-End Funds has posted to  https://t.co/4aRRZhElh7. https://t.co/p3EnIZb1xT
— DoubleLine Funds (@DLineFunds) September 11, 2017