The World Internet Conference also known as Wuzhen Summit, is an annual event, first held in 2014, organized by government agencies in China to discuss Internet issues and policy.
4th World Internet Conference Press Conference | wuzhenwic.org 16 November 2017, in Beijing: "Ren Xianliang, deputy director of the Cyberspace Administration of China, Ge Huijun, director of the publicity department of Zhejiang province and Party secretary of Tongxiang city Sheng Yongjun provided information about the conference and answered questions. With a theme of Developing Digital Economy for Openness and Shared Benefits -- Building a Community of Common Future in Cyberspace, this year's conference has 20 forums covering the five topics of digital economy, cutting-edge technologies, Internet and society, cyberspace governance and exchanges and cooperation, said Ren. The conference will welcome 1,500 guests from five continents, including heads of international organizations, internet business leaders, internet celebrities, experts and scholars."

. @icann_president If it's in your personal capacity, you should find some other account to post from. #ICANN
— Andrew Sullivan (@anvilwalrusden) December 19, 2015


"During the GNSO Council meeting in Abu Dhabi, ICANN’s Chief Financial Officer stated that ICANN’s funding is “stabilizing” – that is to say, income has stopped growing. The registrar community appears to feel it is trending downwards, judging from the discussion in the GNSO Council meeting. We feel very strongly that the time is now for the organisation to reconsider unnecessary expenditure and to work to build a strong Reserve Fund that can support the organisation should income begin to decline. Given ICANN has lost 15% of its fee-paying registrars this quarter alone, we think this is a very real possibility." (emphasis added)--excerpt: Statement​ ​of​ ​the​ ​Non-Commercial​ ​Stakeholders​ ​Group​ (NCSG) ​on​ the ICANN​ ​Reserve​ ​Fund​ ​Rationale​ ​and​ ​Target​ ​Level (pdf) embedded below (highlighting added):

Editor's note: read the other comments submitted, including mine, here.

b. A Russian Internet DNS for BRICS--move over ICANN--Russia to launch ‘independent internet’ for BRICS nations - report | RT.com--President Vladimir Putin personally set a deadline of August 1, 2018 for the completion of the task "an independent internet infrastructure for BRICS [Brazil, Russia, India, China, South Africa] nations, which would continue to work in the event of global internet malfunctions."

DefenseOne.com:"More precisely, Moscow intends to create an alternative to the global Domain Name System, or DNS ... If you’ve got a backup internet running that connects you to key nation-state trading partners, you can hack your opponent at less risk of disrupting your own state" (emphasis added).  [Editor's note: prepare for more severe cyberattacks against DNS internet infrastructure after August 1, 2018.]

e. ICANN FY18 Q1 Stakeholder Update: On 30 Nov 2017 ICANN published its report for the quarter ending 30 September 2017, and an Executive Summary recording from Göran Marby, ICANN President and CEO, and Cherine Chalaby, Chairman of the ICANN Board of Directors, reviewable here. The public is invited to attend a question and answer (Q&A) call on 7 December at 17:00 UTC to ask any questions about the report. More information, including how to register for the call, here.

New gTLDs Are NOT Failing Due To 'Lack of Awareness':
Ignore the false narratives of the hucksters (new gTLD registry operators and their sycophants), and ICANN's incompetent Global Domains Division (GDD), the above (screenshot Nov 28, 2017, courtesy of ntldstats.com) is not a picture of consumer (registrant) "lack of awareness" about new gTLDs, but a picture of consumers (registrants) rejecting the unwanted and defective new gTLDs--note that on Nov 27, every one of the top ten new gTLDs was "bleeding red"--declining in domain name registrations. According to ntldstats.com, since April 13, 2017, total new gTLDs' domain name registrations have declined by about six million registrations, and for all of 2017 so far, a net loss of over 4 million new gTLDs' domain name registrations. 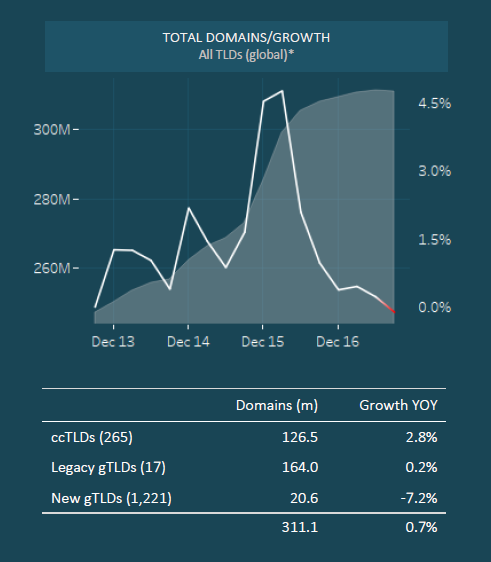 Editor's note: ICANN and the "ICANN community" should learn to listen to consumers (registrants) before assuming to know what registrants want and need. Hint: consumers do not want or need hundreds of new gTLDs that fail to work as expected on the internet (technical feasibility #fail), nor gTLDs with unpredictable predatory registry pricing (anti-consumer monopolistic pricing power) and excessive overreaching RPMs (anti-registrant, anti-free speech). Registrants do not want or need a pack of lying hucksters pushing their defective, worthless new gTLD domain names, using as many lies as they think they can get away with. Add to all of that the new gTLDs 'private auctions' which drove up costs that can only be recovered from registrants, and you have a picture of a real new gTLDs program #FAIL. ICANN never listens to registrants and that is why this new gTLDs program is failing. Most knowledgeable registrants are neither as gullible, nor incompetent, as ICANN.

• Net Neutrality: The Courts Will Have to Save Net Neutrality in the U.S.: "So drastic is the reversal of policy [if, as expected, the commission approves FCC Chair Ajit Pai’s proposal on December 14, 2017], and so weak is the evidence to support the change, that it seems destined to be struck down in court ... government agencies are not free to abruptly reverse longstanding rules on which many have relied without a good reason ... polls indicate that 76 percent of Americans support it [net neutrality]. The F.C.C., in short, is on the wrong side of the democratic majority ... Because he (FCC Chair Pai] is killing net neutrality outright, not merely weakening it, he will have to explain to a court not just the shift from 2015 but also his reasoning for destroying the basic bans on blocking and throttling, which have been in effect since 2005 and have been relied on extensively by the entire internet ecosystem."--Tim Wu, Columbia University Law Professor in NYTimes.com.


Among Trump supporters there is a rebellion brewing over net neutrality:

"This is as anti consumer as it gets. All will pay more for less [while] simultaneously enriching corporations as they increasingly control who sees what when and how. This is NOT MAGA. It’s a heist and a hijacking"--Trump supporter in TheIntercept.com.

•  EU Internet Censorship: European Law Claims to Protect Consumers… By Blocking the Web | Electronic Frontier Foundation | eff.org Nov 22, 2017: "... the European Parliament passed a new Consumer Protection Regulation [PDF] that allows national consumer authorities to order ISPs, web hosts and domain registries to block or delete websites... all without a court order. The websites targeted are those that allegedly infringe European consumer law ... the range of websites that could be censored is both vast and uncertain ..."