Adobe Connect Recording or Livestream or audio. Remote Questions must be sent to: engagement @ icann.org (w/o spaces)

Oct 29: reaction to the Board's letter of October 28 (below) at ICANN60, ranges from shock (SSR2 Mail List) to befuddlement at the ICANN GNSO session today, as apparently no one at ICANN60 knows the specifics (other than the Board and SSAC--and so far neither is talking specifics) which caused the ICANN Board to take this unprecedented and questionable action. A key video replay from an ICANN60 session today has been hidden from the public behind a VPN sign-in which forced this complaint to be filed today.--Update Oct 30: the issue has now been fixed per ICANN Complaints Office, and I reviewed Sunday's Adobe Connect replay of the SSR2 outreach public session, but no information was disclosed relating to the Board's or SSAC's issues with SSR2. Co-Chair Denise Michel told GNSO on Sunday that the SSR2-RT had received no "actionable information" from either the Board or SSAC.


Steve Delbianco:  "Thank you, Steve Delbianco with the Business Constituency within ICANN … I was troubled this week when the Board under that mandate decided to pause one of the reviews, the SSR2 review, and Rinalia Abdul Rahim [ICANN Board member] today explained that in your obligation to cause a review, you certainly would want to hit pause if you had any reason to believe the review wouldn't happen according to the bylaws.  And I appreciate a heads-up, if that's the case. But my question for you is: having hit pause, does the community need to come back to the board to hit the play button, to hit the resume button again?  Or can we exercise the authority I think the bylaws give us to pay attention to your heads-up, your alert, but it's up to us to resolve any considerations with respect to the scope, composition, or structure and it's up to you in the ACs and SOs to determine we're going to go ahead and resume or hit the play button after you hit the pause button?  So I'd love to hear your answer on this so we can get past this and move on.  Thank you."

Later comment at the Forum from Jonathan Zuck (Innovator's Network): "... following on Steve Delbianco's comment,  I guess I fear that he let the Board off the hook maybe a little too easily in his presentation  and I really want to bring to the surface the notion that the optics of how this all went down with the SSR2 are not good ..."

Response from Steve Crocker, ICANN Board Chair: "... The current situation is that the issues have been identified, we can spend time here if we want to go into it a little bit more.  We wrote a letter a couple of hours ago laying out more background and so forth, that's intended to be the beginning of a consultation process that the Supporting Organizations and Advisory Committees are intended to partake in.  The Board does not like -- I can absolutely assure you that we took no relish in this.  We don't view it as a comfortable situation  and we absolutely are not trying to either stop it or control it in detail.  And we have no stake for ourselves for sure in any of the issues and we're not particularly trying to protect the organization, but we do care a lot about the use of the resources, we do care a lot about whether there is a sensible, organized process and that the internal dynamics are effective.  So I'll stop there, unless you want to press further.”

[Editor's note: Like most domain name registrants, I will not be in Abu Dhabi, and like most in North America, I will be fast asleep during most ICANN60 sessions. Next week's News Review will have an ICANN60 recap drawn from various sources, including some of those shown below.]

ICANN FY17 Audited Financial Statements [PDF, 212 KB]--p.27: "ICANN’s President and CEO, Göran Marby, has an employment agreement with ICANN through May 2021. Pursuant to that employment agreement, Mr. Marby is entitled to an annual base salary of $653,846 and at-risk compensation of up to $196,154 – not to exceed a total of $850,000 annually per year based on the President’s and CEO’s achievement of the established performance goals."

ICANN60, Abu Dhabi (click on image below to go to Google Map of ICANN60 venue): 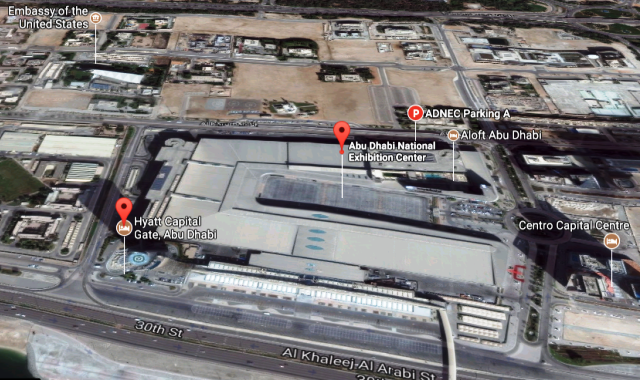 b. DNSSEC Root Key Operations and the Infineon Smartcard Bug | ICANN.org: "... we believe that the DNSSEC KSKs are not subject to this vulnerability. However, no system is perfect ..."  (emphasis added) [Editor's Note: comforting words from ICANN?]

e. ICANN61 | San Juan: Will Puerto Rico be ready by 10-15 Mar 2018? See status.pr and FEMA.gov. 17 Oct 2017: "Over the next several months, the Puerto Rico Electric Power Authority (PREPA), United States Army Corps of Engineers (USACE), the Department of Energy, and private industry will unite to restore emergency power to Puerto Rico’s electric grid, which was heavily damaged by hurricanes Irma and Maria. Currently, only 14 percent of Puerto Rico has electricity ...."--FEMA.gov.


•  Blockchain & Domains? Undeveloped.com Oct 20--The Future Of The Domain Industry Lies In Blockchain--"... Domains are currently illiquid assets. We can change that. Anyone will be able to invest in premium domains and entire domain portfolio’s after we introduce fractional domain ownership. This can lead to the inception of the first stock exchange for domains. And that’s just the start ..."

•  ccTLD .AU: auDA welcomes Federal Government review of .au domain | auda.org.au. The next step is Australia's Department of Communications and the Arts will shortly release a discussion paper seeking input from interested industry and community stakeholders with the review expected to be finalized by early 2018.--Terms of Reference for a review of the .au Domain Administration | Department of Communications and the Arts.

5) Top 4 Most Read Posts (# of pageviews Sun-Sat) this past week on DomainMondo.com: