Q3 2017 earnings release (pdf)--"We had a terrific quarter, with revenues up 24% year on year, reflecting strength across Google and Other Bets," said Ruth Porat, CFO of Alphabet. "Our momentum is a result of investments over many years in fantastic people, products and partnerships." --excerpt: 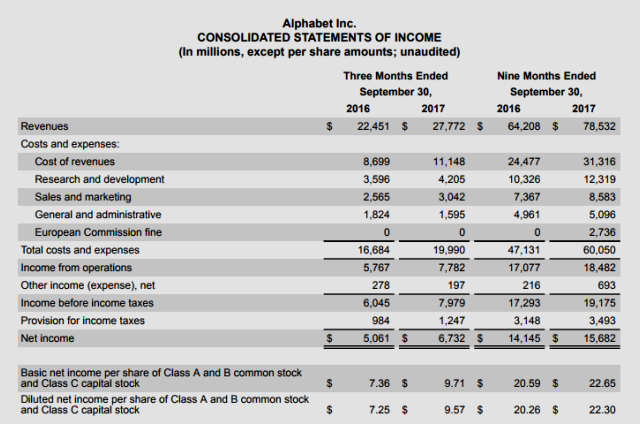 VeriSign's (VRSN) CEO James Bidzos on Q3 2017 Results - Earnings Call Transcript | SeekingAlpha.com: "... Gross additions [in .COM and.NET registrations] during the quarter benefited from continued strength from US based registrars. Although renewal rates are not fully measurable until 45 days after the end of the quarter, we believe that the renewal rate for the third quarter of 2017 will be 74.3%. This preliminary rate compares to 73.0% achieved in the third quarter of 2016. We expected increase to the domain name base during the fourth quarter of between 0.4 million to 0.9 million registrations, which is consistent with the full year 2017 domain name base growth rate of 2.8% to 3.1%. .... The [new gTLD .WEB] update is really the same, there's no new news, although there is activity, the process is ongoing. We are continuing to cooperate with the Justice Department regarding the CID that you asked about. There's an ongoing constructive dialogue. We're producing documents and information. But beyond that there's nothing new to say at this point. Of course, as soon as there is we'll let you know." (link added)
Verisign LIVE webcast of the Q3 2017 earnings call: Thursday, Oct. 26, 2017, at 4:30pm EDT, also accessible by direct dial at (888) 676-VRSN (U.S.) or (323) 701-0225 (international), conference ID: Verisign. Replay will be available at investor.verisign.com/events.cfm.

The audio and associated slides will be available for at least three months at amazon.com/ir.

Twitter, Inc. (NYSE: TWTR) conference call to discuss Q3 2017 financial results, 5:00 a.m. PT / 8:00 a.m. ET, Oct 26, 2017.
To have your questions considered during the Q&A, Tweet your question to @TwitterIR using #TWTR. . Twitter has used, and intends to continue to use, its Investor Relations website and the Twitter accounts of @jack, @twitter and @TwitterIR as means of disclosing material non-public information and for complying with its disclosure obligations under Regulation FD. See also Twitter SEC filings and Twitter investor relations: investor.twitterinc.com.
Tweets by TwitterIR