1) How Facebook $FB Pays So Little Tax In India

India last year became Facebook’s biggest user base with 241 million accounts, but reported revenue was just 0.2 per cent of its global total. Now the Indian government is targeting US tech giants for a revenue grab. Financial Times (ft.com) video above published Feb 22, 2018: 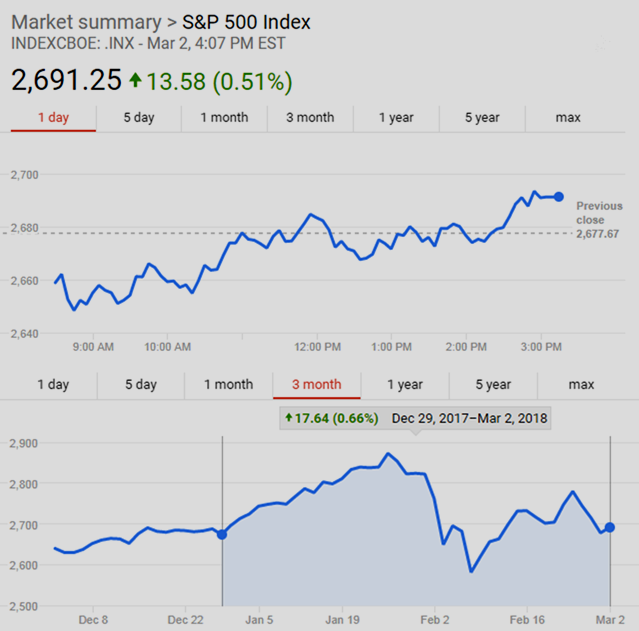 Tech Stocks Thumb Nose At Trump Trade War Fears As These 4 Industry Sectors Rock | investors.com March 2, 2018: "Perhaps more importantly, the Nasdaq is finding bullish support at its still-rising 50-day moving average. The market value-weighted index, boosted no doubt by strength in FANG stocks and other tech giants, is up 4.4% year to date."

Trade Wars? Trump tweeted Friday:“When a country (USA) is losing many billions of dollars on trade with virtually every country it does business with, trade wars are good, and easy to win. Example, when we are down $100 billion with a certain country and they get cute, don’t trade anymore-we win big. It’s easy!" German Stocks Crash Near 1-Year Lows On Trade Fears | ZeroHedge.com: "As Bloomberg notes, "the threat of a trade war was always likely to hit the export driven German economy hardest.""

Gartman Stopped Out On Market Short | ZeroHedge.com: "... we have been wrong in being short of equities, for there comes a time when the action of the market tells us that we have to admit the error of our ways ... facts make no difference for prices are higher…"

From the Reuters.com feed: