Apple's new entertainment subscription services and credit card, launched to great fanfare this week, could raise new concerns for the company over market power and competition issues. Apple executives at a star-studded event in Cupertino, Calif., this week unveiled subscription services in gaming, news and television, as well as a new Apple credit card. Sally Hubbard, director of enforcement strategy at the Open Markets Institute, told TheHill.com she is concerned that Apple is "controlling the game and playing the game too" as the owner of both the iOS App Store and creator of the iPhone.

The third generation of the butterfly keyboard on Apple's Mac laptops was supposed to fix all the problems. But nope. WSJ.com's Joanna Stern explains why the keyboards on the newest and most expensive MacBooks keep breaking—and the few things you can do about it. Wall Street Journal videos above published Mar 26 & 28, 2019.

The formation of a new ride share initiative called T3 with 3 major Chinese state-run automakers, $BABA & Tencent is just one more example that the next wave of tech-based disruption in areas like mobility will be so expensive that no one or two companies can go it alone. $XLK pic.twitter.com/EEggSQGYfp
— DataTrek Research (@DataTrekMB) March 28, 2019

Snapshot Thursday, March 28: Stocks rose slightly, the S&P 500 holding steady over the past two weeks, but up 12% year-to-date. Treasury yields slightly higher, while the $US surged, hitting gold, which dropped nearly 1% to a three-week low of $1,290 an ounce.

European Economic Storm Clouds--insidesources.com: on our way to another round of the European sovereign debt crisis?

EU: A Proposed Megadeal Exposes the Grim Outlook for Europe’s Banks--bloomberg.com: Deutsche Bank and Commerzbank joining forces would be just the start of a long, painful process.

European Prognosis negative: the Financial Times reports that Deutsche Bank A.G. is looking to raise between €3 billion ($3.4 billion) and €10 billion in equity to help consummate the planned merger with peer Commerzbank A.G., “a move designed to end the debate over whether Germany’s largest lender has enough capital.” In a commentary, Jeffrey Snider of Alhambra Investment Partners wrote that the ECB’s efforts to incentivize credit growth through penalizing idle reserves has backfired, demonstrating the differences between theory and practice.

They really have no idea what they are doing. The ECB is not a collection of newfound doves, they are chickens without their heads. Either way, it does not amount to anything good, and adds more weight to the considerable and growing list of everything bad.--grantspub.com

The average European bank’s holdings of sovereign debt are about 170 percent of its core Tier 1 capital, more than triple the exposure at U.S. banks, according to Deutsche Bank research analysts. What’s more, about 60 percent of an average European bank’s sovereign bond holdings are of those issued by their home government. Why? Because government bonds carry zero risk weightings on banks’ books. This creates some perverse incentives.

Eurozone flash manufacturing PMI plunges to 47.6 in March, 71-month lows--fxstreet.com. See also: The eurozone lacks the scaffolding to withstand the symmetrical shock of the next recession, which could imperil the euro itself.--socialeurope.eu. 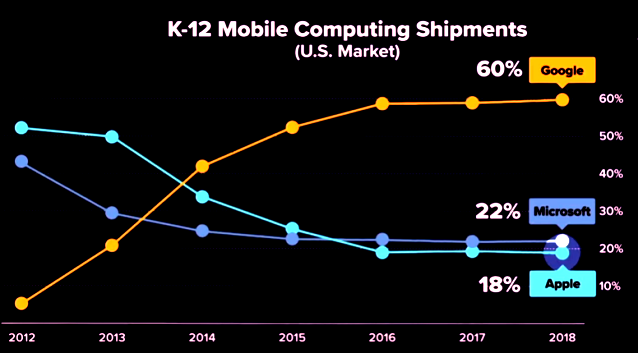 Google, Microsoft, and Apple Are Fighting For Classrooms--CNBC.com video--chart above source: futuresource-consulting.com. Chromebooks are winning.

Lyft closes up 9% on its first day of trading after raising $2.3B in its IPO, which valued the company at over $20B--NASDAQ: LYFT.

Facebook: 10 Reasons Why I Have Sold All My Shares--seekingalpha.com--"Mark Zuckerberg wrote that Facebook will become "privacy-centered". This is really not believable, and if it would be, shareholders should be worried even more ... Zuckerberg himself has become a problem for Facebook."

Apple Infringes Qualcomm Patent; Judge Recommends Ban on Some iPhones--bloomberg.com.
Apple $AAPL: few analysts have looked at the headwinds in Europe and the longer term challenges in China.--seekingalpha.com.

The $130 billion digital advertising market may be dominated by Google and Facebook, but Amazon will start selling video spots on its smartphone shopping app.--zerohedge.com.

Hewlett-Packard (HP) and Mike Lynch faced off against each other in London’s High Court on Monday in a multi-billion dollar showdown over HP's 2011 purchase of the Autonomy software business he founded. The Autonomy-HP deal was a disaster, due, in part, to a failure of due diligence by HP whose CEO at the time, Leo Apotheker, was subsequently fired.

Startups Look Elsewhere: "With the cost of living surging across California, it's hardly surprising that the state has seen the largest net loss of residents as frustrated Californians seek more affordable climes like Nevada and Texas ... many of those who haven't left wish they could."--zerohedge.com.