Proposed Renewal of .org Registry Agreement | ICANN.org: "ICANN organization is posting for public comment the proposed agreement for renewal of the 2013 .org Registry Agreement (herein referred to as ".org renewal agreement"), which is set to expire on 30 June 2019. The .org renewal agreement is a result of bilateral discussions between ICANN and Public Interest Registry, a Pennsylvania non-profit corporation, the Registry Operator for the .org top-level domain (TLD)."
Public comment period closes 29 April 2019 at 23:59 UTC.

What's the Problem? ICANN Org has once again subverted its own ICANN community's policy-making processes by proposing drastic changes to a legacy gTLD registry agreement, to wit: removing all price controls on .org domain names and subjecting .org domain names to a new Section 2.8 and Specification 7 in the proposed renewal agreement as well as  the new gTLD program's Rights Protection Mechanisms (RPMs) (which are currently being reviewed and revised in a PDP, and were never intended to apply to legacy gTLDs .COM, .NET, and .ORG when adopted in connection with the new gTLDs program). The RPMs are set forth in Specification 7 of the new gTLDs Registry Agreement and include the Uniform Rapid Suspension (URS) system, the Trademark Post-Delegation Dispute Resolution Procedure (PDDRP) and the Registration Restrictions Dispute Resolution Procedure (RRDRP).

Analysis & Opinion Editor's note: this ICANN & PIR .ORG proposal crafted in secret, is policy-making at its worst, by the management and staff of ICANN, a California corporation, operating as a rogue "global internet coordinator" without any governmental mandate and accountable only to itself and its non-representative "ICANN community" dominated by its own "contracted parties" and lawyers and lobbyists representing "special interests." ICANN shows once again it has little regard for domain name registrants, and is unfit for any role in global internet governance.

This proposal, apparently agreed to by the current .ORG Registry Operator PIR's management and its Board of Directors, also indicates that PIR is unfit to manage the TLD .ORG in the global public interest in accordance with RFC 1591 and its contract should therefore be terminated, and .ORG opened for bidding in conformance with the advice of the U.S. Department of Justice Antitrust Division, attached to a letter sent to ICANN in 2008, by NTIA.gov.

PIR's new President, Jonathon Nevett, a co-founder of new gTLDs registry operator Donuts, who 'cashed out' when Donuts was taken over by former ICANN CEO Fadi Chehade and his crony, former ICANN GDD President Akram Atallah, now, apparently, wants to turn PIR into another "Donuts" and .ORG into a new gTLD like .SUCKS.

Registrants should consider dumping all of their .ORG domain names, or renewing any retained .ORG domain name for 10 years. In 10 years, we might be rid of ICANN and its corrupt culture of monopolistic crony capitalism based upon pure greed and the shameless exploitation of both domain name registrants and trademark owners.

a. EPDP Team Members at WSIS?

Kurt Pritz, who quit as EPDP Chair in February and has been replaced by acting Chair Rafik Dammak, inexplicably reappeared on the EPDP mail list March 19, soliciting for 2-3 EPDP members to travel at their own expense to Geneva, Switzerland, and participate in ICANN Org's Thematic Workshop: ICANN, the GDPR and WHOIS (pdf), scheduled for April 11, 2019, 16:30-18:15. The only response to date came from Ayden Férdeline (NCSG EPDP member):


"I am afraid I do not understand why this session is taking place. May I suggest we re-think whether we even need to present our work at WSIS? Do we know who from ICANN org will be in attendance? Will there be a large ICANN org staff delegation? In the past when I have gone to WSIS, Theresa Swinehart has been there sitting on the panels, and often other ICANN staff, reading the same slides we've all seen countless times, but the attendance from the 'community' is often sparse - if the room not empty. Is this session taking place to fulfill a legitimate need to update people on our work, or is it furthering a different goal, i.e. because ICANN is seeking sectoral membership to the ITU and WSIS is an ITU event? I believe ICANN is obliged, as a sponsor of this event, to host a number of workshops - are we just helping ICANN meet its quota? I don't want to sound too negative here but I'm really not sure what the goal for this session could be. WSIS is no longer an important forum and has been struggling to fill its slots for sessions. They extended the workshop submission deadline multiple times this year. Mightn't we might be better off focusing our attention planning for Phase 2 of our work?" (emphasis and link added) 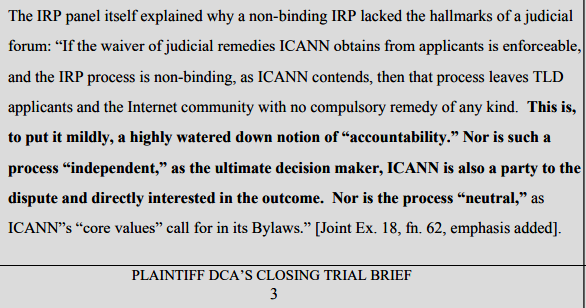 .AMAZON--Colombia & Other Amazon Countries Go To ICANN To Keep .amazon Domain Name From Amazon.com--financecolombia.com March 19, 2019: "the Colombian government stated through its MinTIC (Ministry of Technologies of Information and Communications) delegates said in a statement: 'from the beginning there has been a firm rejection of any pretense of appropriation by third parties, of the geographical names of the states, without their due consent and without taking into account the right that they must have to participate in the governance of the domain ‘.amazon '.'“

Q. Will all domain name marketplaces have to become licensed escrow agents?--TheDomains.com.

INTA: Effects of ICANN’s WHOIS Reforms Under GDPR--published March 14, 2019, by INTA's Internet Committee 2018/2019 (pdf). A report summarizing the results of the INTA Internet Committee's call for comments during the summer and fall of 2018 regarding ICANN's Temporary Specification for WHOIS and its impact on access to thick WHOIS registrant information.

How Starbucks protects its brand in China (about half of Starbucks’ enforcement workload): (a) relationship building with government departments in provinces is key to success; (b) “light touch” used when dealing with non-willful infringement of brands such as Frappuccino--more here.

Data Privacy: "It’s clear after this hearing that companies who deliberately over-collect data and sidestep user privacy are making a business choice"--Why the Debate Over Privacy Can't Rely on Tech Giants--eff.org. See also: Here’s Why You Can’t Trust What Cops and Companies Claim About Automated License Plate Readers--eff.org.

EU: with final vote on the controversial EU Copyright Directive, Articles 11 and 13, scheduled for this coming week, a number of European Wikipedia sites went 'dark' for the day, blocking all access and directing users to contact their local EU representative to protest the laws. Many fear that the directive will adversely impact freedom of speech in Europe.