"... The largest new gTLDs registry operator (more than 200 new gTLDs), Donuts Inc., announced Sep 5, 2018, that it had entered into an agreement "to be acquired by Abry Partners," a private equity firm in which former ICANN CEO Fadi Chehade is now a partner. Terms and timing of the agreement were not disclosed, but Abry's investment is reportedly only for a majority stake in privately held Donuts, and does not provide any additional cash for the company, instead, it provides a way for original investors in Donuts to exit.

While still ICANN CEO, Chehade announced in May, 2015, he would leave ICANN in March 2016, long before his contract ended on June 30, 2017, and did not disclose his reasons for serving as ICANN CEO for only 3½ years, instead of his full term. In August, 2015, he announced that after leaving ICANN he would be a "Senior Advisor on Digital Strategy" at Boston-based Abry Partners, adding, "I expect to add other roles to my portfolio and will update you all as appropriate." Later in December 2015, Chehade announced from Wuzhen, China, that he would serve, after he left ICANN, as Co-Chair [other Co-Chair Jack Ma] of an advisory committee to the government of China's World Internet Conference (WIC), described by Professor Milton Mueller as "like almost everything in China, the WIC is unabashedly state-driven ... a vehicle for the Chinese [Communist] Party-state’s policy agenda ..."

As ICANN CEO, Fadi Chehade's pet project was the NetMundial Initiative [Co-Chaired by Chehade and Jack Ma], which "crashed and burned" when ICANN and the World Economic Forum stopped funding it in 2016. In February, 2015, at a DNA meeting during ICANN52, Chehade stated, "I need to understand it [the domain name industry] more and spend more time in it, no question."

While at ICANN, Chehade was known for hiring and promoting his cronies to management positions within ICANN. Chehade promoted, in June, 2013, his childhood friend and former co-worker, Akram Atallah, to the then second-highest paid position at ICANN, President of the Global Domains Division (GDD), which is now [was] the highest paid position at ICANN at  $745,615.00 per the most recently available IRS 990 (pdf), p.56 of 81.

Perhaps it was for some or all of these reasons, that Abry Partners decided to venture into an industry where it has no experience--the domain name industry--despite what Abry says on its website, abry.com: "Abry invests in private equity, preferred stock and debt securities within our sectors of expertise ..."

October 2, 2016: "Fadi Chehadé quit as ICANN CEO 3½ years into a 5 year contract, but unfortunately, he left behind his legacy of cronyism at the organization [ICANN]:

Conflicts of interest at ICANN are nothing new--

“Given how quickly these two individuals sped through the revolving door [at ICANN], one can’t help but wonder if thinking about their next career move influenced their policy [implementation] decisions,’’ said Sheila Krumholz, executive director of the Washington-based Center for Responsive Politics.--Washington Post, August 20, 2011.

ICANN was admonished by NTIA in 2012, to little avail obviously--and ICANN's sordid history includes episodes involving an ICANN Board Chairman, and ICANN's Chief Strategy Officer "architect of the new gTLDs program." Now a former ICANN President & CEO and his crony President of the Global Domains Division add another chapter.

All of that "confidential" privileged and proprietary information ICANN required new gTLD applicants and their principals to submit to ICANN's Global Domains Division (GDD), is now (or soon will be) also known by their largest new gTLDs' competitor Donuts (240 new gTLDs) by virtue of the former GDD President being Donuts CEO--talk about an unfair competitive advantage!  ICANN runs such a slipshod operation that every new gTLD applicant should always assume all information they ever submit to ICANN, will also be known by at least one of their competitors in the future.


We are not running out of domains. This is a “way for registries and registrars to make money.”--source.

Little did we know that among the people who would personally be enriching themselves the most from ICANN’s corrupt new gTLDs program and policy (developed solely for the benefit of “contracted parties,” i.e., registry operators and registrars, not registrants), would be the two most senior officers at ICANN, who guided and were in charge of the full implementation of the program!

In addition to the multiple Fadi-Akram-Donuts conflicts of interest at ICANN now, and in the future,  Donuts and ICANN are currently in litigation against each other, and Akram Atallah is a material witness in that case, as well as one other pending case, and possible future litigation. The very same day as Akram's appointment as Donuts CEO (and resignation as President of ICANN's Global Domains Division) was announced, the appeal of Ruby Glen (Donuts affiliate) vs ICANN was being argued before a panel of the United States Court of Appeals for the Ninth Circuit:

Listen to the oral arguments of counsel for Ruby Glen (Donuts) and ICANN. At one point (starting at 21:19), counsel for ICANN concedes that Donuts (Ruby Glen) has a further right to file an IRP (Independent Review Process) whenever .WEB is no longer "on hold" status at ICANN, which sets up the interesting possibility that Donuts (Ruby Glen) could further attack the .WEB auction, as may also Afilias, either of which if successful in disqualifying Nu Dot Co (Verisign), could result in a new .WEB auction in which Donuts (Ruby Glen), now financed by Abry Partners' unknown investors a/k/a 'limited partners' (Chinese?), outbids Afilias for new gTLD .WEB.


"... Ruby Glen is not without recourse—it can challenge ICANN’s actions through the Independent Review Process [IRP] .... Because Ruby Glen may pursue its claims through the Independent Review Process, the covenant not to sue is not “so one-sided as to shock the conscience.” See Walnut Producers of Cal. v. Diamond Foods, Inc., 187 Cal. App. 4th 634, 647–48 (2010) ..." (emphasis added)

ICANN EPDP Meetings this coming week:
Non-members of the EPDP working group can follow the Oct 16 meeting via Adobe Connect, or audio cast via browser or application. The EPDP meeting on Oct 20 can be followed remotely by clinking the link on the meeting's ICANN63 page. Links to all EPDP meetings' transcripts and recordings are on the GNSO calendar. Other EPDP links: wiki, mail list, action items, Temp Spec, EPDP Charter (pdf), Data Elements Workbooks (pdf), GNSO Council's updates, EPDP page.


Highlights of the EPDP Meetings Oct 9-11:
EPDP meeting to discuss retaining independent legal counsel Oct 10--chat transcript:
Stephanie Perrin (NCSG): we are not doing training, we are doing legal drafting. Let us not have any illusions about that. Who goes into a legal drafting exercise without an advising counsel? ...
Farzaneh Badii (NCSG): how much did they [ICANN] spend for the lawsuit against EPAG? Ayden Férdeline (NCSG): exactly Farzi ... perhaps we just weren't given an adequate budget ... Farzaneh Badii (NCSG): nope we were not. Stephanie Perrin (NCSG): So this is arguably the biggest policy argument in the history of ICANN, and we are pinching pennies? ... Berry Cobb (ICANN staff): From a budget perspective, we in effect have at most $168K without afffecting other line items such as funds set aside for F2F.

Stephanie Perrin (NCSG): "... I’d just like to note that we had a discussion last night about why we need legal counsel independent, neutral legal counsel who is familiar with data protection law to be on this call to stop this going in circles. In my view this is a good example. We continue to conflate the legitimate interests of third parties, that would be BC interests, to combat trademark abuse, law enforcement interests, cybercrime interests to combat, you know, malware and other kinds of DNS abuse. We continue to conflate those interests with the purpose of the collection, use and disclosure of the information, which is a primary relationship between the individual or entity getting a domain name and the delegated party that provides the ability to the Internet with that domain name. Right? That’s the primary purpose of registering a domain name. All these other interests are interests, they are not purposes. ICANN was instructed to pay attention to all of these other interests but that does not make them purposes in a relationship. So really to suggest that we are not going to facilitate the legitimate interests is unfair. We are working on how to facilitate those legitimate interests. But that is an instrument. The purpose of ICANN is not to set up Whois; it is to permit the registration of domain names. And while the purpose of ICANN in the context of GDPR has been stated as being continuing the Whois to the maximum extent possible, that is not a shared belief; that is a position taken by ICANN Legal and the Board ...". 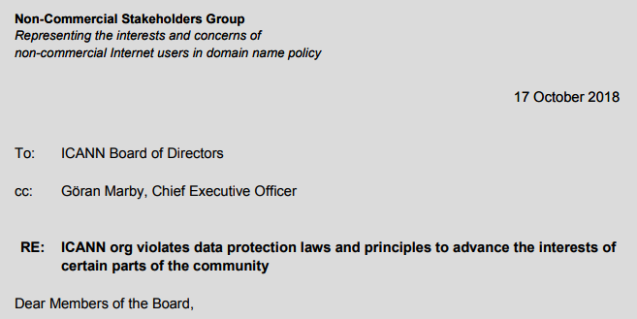 f. 10 Oct 2018 Letter from GAC Chair Manal Ismail (pdf) to ICANN Board Chair Cherine Chalaby and ICANN CEO--Government Advisory Committee (GAC) Request for additional Secretariat Support: "it has become clear that in 2019 there will be a period of time during which the GAC will be without the resources to support a number of the functions currently being provided."


"Thank you for your correspondence of 26 July 2018 concerning the GNSO's understanding of SSAC095 about emoji in domain names. We agree that no further action on this matter is needed at this time."

Reasserting cyber sovereignty: how states are taking back control by Evgeny Morozov--TheGuardian.com--The digital debate is now about trade and security – and every major nation is insisting on its technological sovereignty.


Laos: Overcoming a government crackdown on social media in Laos--aljazeera.com.

Africa: After Troubles In Myanmar, Facebook Charges Ahead In Africa--wired.com.

US: US State Department needs a makeover for the digital age--TheHill.com.