c. Email to EPDP members from ICANN support staff 2 Apr 2019, action item coming out of the ICANN64 EPDP Team meetings: "start adding any legal questions you believe require a response in the context of the phase 2 identified topics"--see graphic below--no questions yet added:

"You are also encouraged to highlight any specific legal guidance that has already been provided ... that may be of relevance to the upcoming deliberations." See Legal Memos provided by Bird & Bird to ICANN GNSO EPDP.

a. .AMAZON: Amazon's Fight With South American Countries Over Control of '.amazon' Domain Name Comes to a Head--"... on March 10, ICANN set a deadline of April 7 for the two sides to finally resolve this dispute once and for all. But that seems very unlikely ..."--gizmodo.com. See BBC.com: "The nations of the Amazon want the name back." See previously on Domain Mondo: News Review | Another ICANN New gTLD Disaster: .AMAZON.

Editor's note: the idea of having private .BRAND gTLDs was a mistake from the beginning, a corruption of the concept of generic top-level domains (gTLDs) as set forth in RFC 1591 written by Jon Postel, which predates the formation of  ICANN and its "Californication" of the internet and global DNS. I'm with the South American countries. ICANN should do the "right thing" for once and end the .BRAND gTLD program, refund the application fees, and "undelegate" all .BRAND gTLDs from the internet "root," while allowing every owner of a distinctive trademark to block use of that mark as a gTLD in the future. 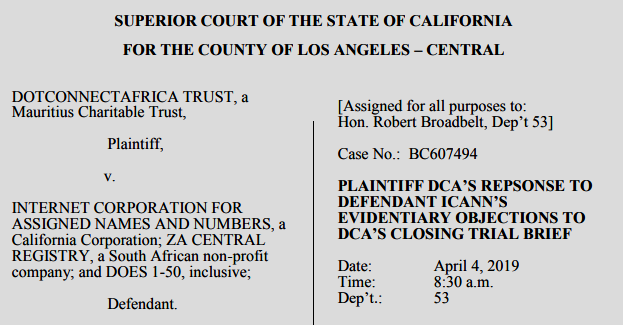 Editor's note: there are no "winners" in this matter, which I now refer to as Greg Shatan vs George Kirikos vs ICANN et al, and there are many with "unclean hands." Hopefully the ICANN Ombudsman will bring some "sanity" to the situation.

d. Trolls at ICANN?
Mark Svancarek revealed this week on the EPDP mail list, that "Over the last several months, UASG lists have been exposed to one or more pseudonymous trolls who attack certain officers and ambassadors by name, and criticize decisions made in accordance with our charter which they feel merit their input; when we ban them, he/they just create multiple new aliases.  Sometimes they email us directly ..." [link and emphasis added].

Svancarek is Principal Program Manager, Privacy & Regulatory Affairs, Tech Policy & Internet Governance, at Microsoft. He has been an active participant in ICANN as Vice Chair of the Universal Acceptance Steering Group (UASG), as well as EPDP member from the Business Constituency.

China: A Chinese court has jailed former chief internet regulator, Lu Wei, for 14 years, having found the once influential official guilty of taking bribes worth almost $5 million from 2002 to 2017, including as head of the Cyberspace Administration of China (CAC). Lu Wei at ICANN50 in June, 2014, at London:

Editor's note: it's possible that ICANN paid Wei "bribes," directly or indirectly, during that same time. ICANN was doing every thing it could to garner support, or at least acceptance, from the Chinese government, in order to establish the "ICANN presence" in Beijing. We may never know for sure, ICANN has never been audited by the IRS. One thing is clear, Fadi Chehade, ICANN CEO at the time, acted strangely when quizzed about ICANN's expenditures and lobbying efforts with foreign governments, and never gave a straight answer nor the accounting he promised at the time. ICANN still doesn't disclose its lobbying activities and expenditures outside the U.S.

Can The EU Survive Its Own Censorship? The EU’s new, comprehensive Copyright Directive may change the way people use the internet--zerohedge.com.

Prediction: Article 13 will damage the EU more than it damages the internet. The EU believes it can push the future in the direction it wants. But the future has more mass than the EU. So what will happen instead is that the EU will push itself away from the future.
— Paul Graham (@paulg) March 27, 2019

Article 13 will damage the EU more than it damages the internet ... The EU will push itself away from the future

One thing that makes me skeptical about the EU long term is the way they seem to view regulation not as an unfortunate necessity, but as an exciting project.
— Paul Graham (@paulg) October 12, 2018

Google, Facebook Phished For Millions--Business email compromise (also called BEC, CEO or invoice fraud) usually targets finance and other corporate executives who are tricked into issuing payments that could be upwards of millions or hundreds of millions of dollars--cshub.com.

Microsoft obtained US court order to take control of 99 websites which Microsoft says are linked to Iranian hacking group Phosphorus--microsoft.com.