ICANN59 Schedule--"ICANN59 will be ICANN’s second ever Policy Forum. This four-day meeting will be focused on sessions which are core to current policy development work and outreach"--no official opening ceremony, no public forums. The pre-ICANN59 Policy Report embed below:

"... even with this huge threat [GDPR] looming over it, ICANN still can’t handle the data protection issue wisely and fairly. All of its efforts to prepare for the crisis reveal the same bias that got it into the problem to begin with. ICANN’s internal efforts involve only registries and registrars – the supply side of the industry – and not registrants .... [ICANN] blog [post by Akram Atallah and Theresa Swinehart] says that ICANN has formed an internal task force “comprised of senior leaders and subject matter experts” to focus on this important matter. Who is on this task force? Just contracted parties (registries and registrars), other registries and ICANN staff ... Not a single representative of domain name registrants, not a single privacy advocate, not a single data protection authority was allowed on the panel. And when we say “not allowed,” we mean it. The person responsible for organizing the session, Peter Vergote of Belgium’s .BE registry, was repeatedly asked to include a registrant representative on that panel. In particular, the name of privacy advocate Stephanie Perrin, an internationally recognized privacy expert, winner of the Electronic Frontier Foundation (EFF) Pioneer Award, and someone familiar with the workings of ICANN, was put forward. Vergote refused ...."--How ICANN is manipulating its GDPR discussions | InternetGovernance.org by Milton Mueller (link and emphasis added) 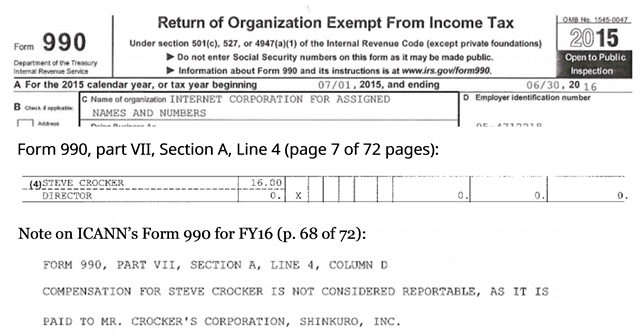 What is taking ICANN CFO Xavier Calvez so long (see embed below) to respond to Domain Mondo's inquiry of May 28, 2017? Perhaps "hiding" compensation of the Chairman of the Board of Directors of ICANN, a 501(c)(3) non-profit California corporation, is something that neither the IRS nor the California Attorney General condones? However, it may speak "volumes" of how ICANN is really run and what ICANN leadership really thinks of the global public interest, accountability, and transparency. As I have said before, with ICANN (like dead fish), the rot starts at the top.


"Top level domain (TLD) zone files are vital resources for performing Domain Name System (DNS) research, security research, and anti-abuse operations. The stated goals of the Centralized Zone Data Service (CZDS) program were standardization and easy, reliable operations for participants who have a requirement to access these zone files ... after three years of operation, community members have documented problems where the CZDS does not deliver on these objectives. Policy and process difficulties prevent subscribers from gaining and then maintaining reliable access to zone files. These problems affect the ability of subscribers to perform research and security functions that benefit the public interest. Furthermore, certain registry metrics related to zone files and WHOIS queries are being reported in an inconsistent fashion. This advisory details these problems and recommends improvements."

The above "recommendations" are all based upon minimal common sense, which begs the question: where is ICANN's bloated and overpaid management? Asleep or just incompetent?

•   Update: Systemic Copyright Alternative Dispute Resolution (SCADR) Policy | pir.org June 20, 2017: "... the feedback we have received to date indicates that this solution lacks sufficient support from our stakeholders. Accordingly, PIR will not implement the SCADR."

•  Of course, most know of the decline in new gTLD domain name registrations in 2017:
ICANN's Theorem of Greed + Incompetence = Choice & Innovation has been proven FALSE.

•  Thinking of Moving Your Website To A New Domain Name? It can (and probably will) take 3 months (or more) for Google Search to pick up all the changes, in the meantime your website will  lose traffic, customers, business and $$, no matter what that SEO guru or new gTLD huckster told you--SERoundTable.com.

•  US Supreme Court (pdf) says in the U.S., a disparaging remark is free speech and can be a registered trademark. See also: SCOTUS Strikes Down Disparaging Trademark Ban | foxrothschild.com.

5) Most popular post (# of pageviews Sun-Sat) this past week on DomainMondo.com: