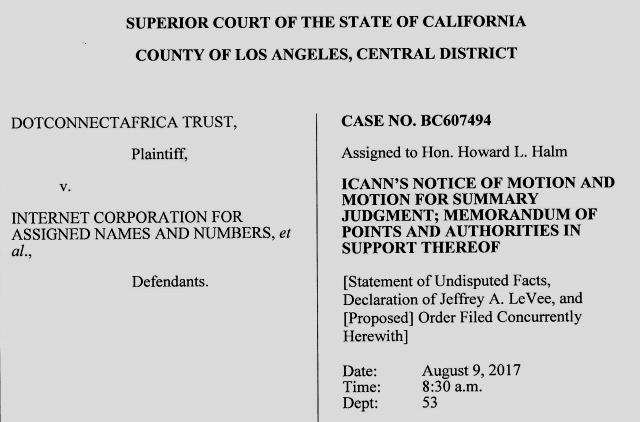 “… DCA and Ruby Glen [Donuts affiliate] breached their agreement not to file a lawsuit against ICANN arising out of their [new gTLD] applications, as set forth in the Covenant [Covenant Not to Sue in the Applicant Guidebook].  The district court in Ruby Glen dismissed Ruby Glen’s complaint [re: .WEB] at the Federal Rule of Civil Procedure 12(b)(6) stage because of the Covenant. Likewise, because DCA’s claims all pertain to the “processing and consideration of” a new gTLD [.AFRICA] application, DCA’s lawsuit is barred under the Covenant …”--ICANN's motion for summary judgment, p. 23, set for a hearing on August 9, 2017.

a. Cure for ICANN Dysfunction:
b. Realm of the Absurd


"Any Charter that recognizes GoDaddy as a closed brand, rather than a Registrar, has truly ventured into the Realm of the Absurd."--James Bladel, GoDaddy V.P., Global Policy, and Chair of the GNSO Council.

[council] FW: [RrSG-Members] GoDaddy Status and Resignation: "I’ve recently been notified that GoDaddy is not eligible to hold office under the current RrSG [ICANN Registrar Stakeholder Group] Charter, due to our having executed Specification 13 for the [new gTLD] .GODADDY Registry Agreement. While Specification 13 is not explicitly listed as a disqualification in our Charter, it contains provisions that are equivalent to Specification 9, which is called out as a disqualification under Section 4.3.6. I was not aware that our adoption of Spec 13 would also encompass Spec 9, and thus make GoDaddy (and by extension, me) ineligible to hold office. We have no immediate plans to launch .GODADDY, and the only active registration currently is NIC.GODADDY, and any Charter that recognizes GoDaddy as a closed brand, rather than a Registrar, has truly ventured into the realm of the Absurd. But rules are rules, so… I’m hereby offering my resignation from the GNSO Council for the remainder of my term (ending at ICANN 60 Abu Dhabi in November). Should the ExCom & Members wish to retain me in office until the conclusion my term, I would be happy to do so on an interim basis, and stand for a special vote, as described under Section 4.3.7. Additionally, GoDaddy will not nominate or run any candidates for office under the existing Charter, and will not cast votes for any pending elections, or on the FY2018 RrSG Budget, or any other votes until our new Charter is adopted."--James Bladel, June 13, 2017. Postscript: "I (Bladel) have resigned my elected office as Councilor, but have been appointed by the Registrar ExCom to continue to serve in an interim basis until a Special Election can be held. On the whole, the net impact of all of this on the Council is….not much. My status changes from “elected” Councilor to “appointed” Councilor for the next few months, but I don’t see that this change necessarily affects the Council, or its work, or our upcoming election calendar."

c. Security Update - Los Angeles Office | ICANN.org: "On Tuesday, June 13, 2017, a person was taken into custody on ICANN’s premises in Los Angeles, CA, unrelated to ICANN’s operations. We are aware and are investigating.  We will provide an update as we learn more and as appropriate." [Editor's note: The police arrested someone at ICANN headquarters in L.A.] 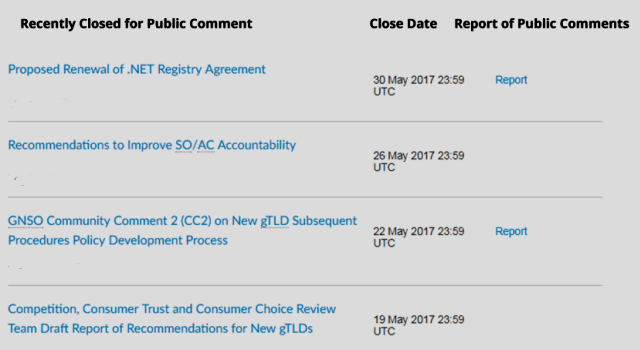 e.  Fighting Fake Profiles on icann.org | ICANN.org: "... To ensure the integrity of content on icann.org, and to mitigate the risks from fake or spam profiles, we have decided that the best short-term solution is to turn off the public aspect of profiles. This change will take effect on 23 June 2017. This temporary fix will afford us the time to work on a better solution, while ridding the site of inappropriate and obscene content. We have already deleted 6,000 of the most egregious and obvious fake profiles." See ICANN Profiles.

f.  From the ICANN Department of Dysfunction: 09 June 2017 unsigned letter from anonymous "members" of RySG [Registry Stakeholder Group] to Steve Crocker and Göran Marby (pdf) [published 12 June 2017] requesting the ICANN Board set a date certain now (before prerequisite reviews and planning are even near completion) for the "next round" of new gTLDs.

h. Holding ICANN accountable re: FY16 Form 990: Still no response from ICANN since the June 1, 2017, acknowledgement:

Dear Sir,  As the signatory of the ICANN Form 990, I have been provided with your question on this document. I hereby acknowledge receipt of your email and question, and thank you for your time and effort in reviewing this document and inquiring about it. Your question and its upcoming response further enhance the transparency on this document. I will submit your email and question for publication on the “Correspondence” page of our website. Our response will also be published on this page, and you will be notified of such publication as soon as it will have occurred.--Xavier Calvez, ICANN CFO, 12025 Waterfront Drive, Suite 300, Los Angeles, CA 90094 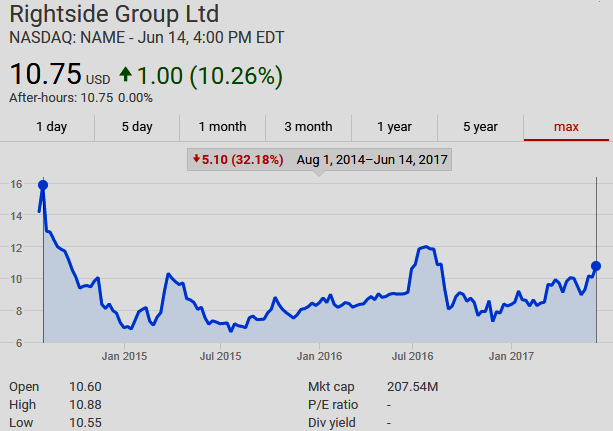 •  Neustar (NYSE: NSR) Form 8-K June 12, 2017: "As previously reported, on December 14, 2016, NeuStar, Inc. (“Neustar”) entered into an Agreement and Plan of Merger (the “Merger Agreement”) with Aerial Topco, L.P. (“Parent”) and Aerial Merger Sub, Inc. (“Merger Sub”) ... On June 12, 2017, and in accordance with the terms of the Merger Agreement, Neustar extended the Outside Date from June 14, 2017 to September 14, 2017. On June 12, 2017, Neustar received written notification from the Committee on Foreign Investment in the United States (“CFIUS”) that it will not take action to prevent the transactions contemplated by the Merger Agreement from being consummated. Receipt of the written notification from CFIUS satisfies one of the conditions to the closing of the Merger, which remains subject to the receipt of approval from the Federal Communications Commission and the satisfaction or waiver of other customary closing conditions. Neustar continues to expect the Merger to be completed no later than the extended Outside Date."