Next ICANN EPDP Team Meetings scheduled for Tuesday Oct 2, and Thursday Oct 4, 13:00 UTC, 9am EDT. Non-members of the EPDP Team can follow the EPDP meetings (including "small team" meetings Wednesday and Friday this week) via Adobe Connect or audio cast via browser or application.

Wed. Oct 3 small group meeting: background document (pdf). Editor's note: 2 facilitators from CBI.org were at this meeting--Gina Bartlett led the meeting and David Plumb was present--so apparently CBI.org has been retained for further "facilitation and mediation" although the details are not known. The Wednesday small group EPDP members present: Alex Deacon (IPC), Laureen Kapin (GAC), Ben Butler (SSAC), James Bladel (RrSG), Marc Anderson (RySG), Margie Milam (BC). NCSG (6 EPDP members) was MIA (missing in action) for most of the meeting with no explanation or apologies noted--Stephanie Perrin (NCSG) did appear more than an hour after the meeting started.

The Wednesday small group did not address the implicit flaws in the present WHOIS data fields (which if corrected would clearly distinguish between a legal entity or person as the actual registrant), instead they appeared to reach 'rough' consensus on adding more WHOIS data fields (before Perrin appeared). So much for data minimization! Meeting transcript (pdf), Notes & Action Items, Adobe replay, MP3, chat transcript (pdf) excerpt:


Stephanie Perrin (NCSG): "note that the registrars will be held accountable for how well informed the individual is. If they give away their rights because they were not well informed, it will be the registrars fault."
Ben Butler (SSAC): "Thank you Stephanie. That would seem to raise the importance of getting the educational resources item right."
Stephanie Perrin (NCSG): "Caution is required here ....if civil society were to sue under the GDPR, in my view (remember, I am not even a lawyer let alone a litigator) the strategy would be to go for ICANN as data controller responsible for the policy, and the registrar as data controller for the client relationship data."


Highlights of the EPDP F2F Meeting Sep 24-26 in LA:
Best Quote of the entire F2F Meeting was from Stephanie Perrin [NCSG] on the first day:

"... about the only valid primary purpose for gathering data from the registrant is so that you can give the registrant the rights to a domain name that’s--that is the most legitimate purpose there is."

Marby's presence in the ePDP was profoundly divisive, exacerbating divisions between those who want ICANN to do anything to create a unified access model and those who think the multistakeholder process should be driving policy
— IGP Alert (@IGPAlert) September 26, 2018

ICANN CEO Marby sends a profoundly mixed message: he says repeatedly the community makes policy and he doesn't want to preempt it. At the same time he invites governments to sanction ICANN as an authority. Doesn't that fundamentally pre-empt what the community does?
— IGP Alert (@IGPAlert) September 26, 2018

Many members of the ePDP wanted to adjourn they were so depressed after Marby's appearance. As the mediators urged us to move beyond that, Board member @chrisdisspain pulls us back into rancor by defending Marby
— IGP Alert (@IGPAlert) September 26, 2018

The key problem is that most ePDP members, especially contracted parties and NCSG, think @ICANN has taken sides and is engaged in a parallel process to create unified Whois access model
— IGP Alert (@IGPAlert) September 26, 2018

Other highlights:
Day One--Welcome & Introductions:
Kurt Pritz, EPDP Chair: "I’m certainly aware of the concerns and even criticism of our progress to date, so I've taken, you know, every comment I’ve heard on board. And in hindsight we might [have] do[ne] some things differently ... while I wish we were further ahead, I don't feel so bad about it ... You know, personally, I don't think that the multistakeholder model can take [any] more of these top down temporary specifications before it falls in on itself ..."

Milton Mueller (NCSG): "Hi. I’m Milton. I spoke to Margie Milam of the Business Constituency who has disappeared but I didn't do it."


Editor's note: there is no question some substantive work was done during the F2F, but whether it was enough to meet the EPDP's tight timeline is questionable. We may have a better idea after the EPDP meeting(s) this coming week, depending on how well the EPDP working group, and its Chair Kurt Pritz, function without the three facilitators from CBI.org who led most of the F2F meeting sessions.


"I mean, from some of the things I’ve seen in the chat it looks like the third party mediators were a positive thing, but it’s not clear to me whether or not any substantive progress was actually made at the face-to-face or are we going to end up in yet another RDS PDP type situation? The other thing as well is, I mean, the – whether or not this kind of outside the EPDP lobbying by certain groups – whether that’s having any impact on the general morale of people involved within the EPDP."--Michele Neylon (RrSG), GNSO Council Meeting, Thursday, 27 Sep 2018 transcript (pdf), p. 38.

2) New gTLDs Next Round?


Editor's note: all submitted comments are here. Of particular note, are the comments submitted by:
and my submitted comment (pdf) embed below. I thank the U.S. Department of Justice Antitrust Division, for their affirming response which I received Friday. 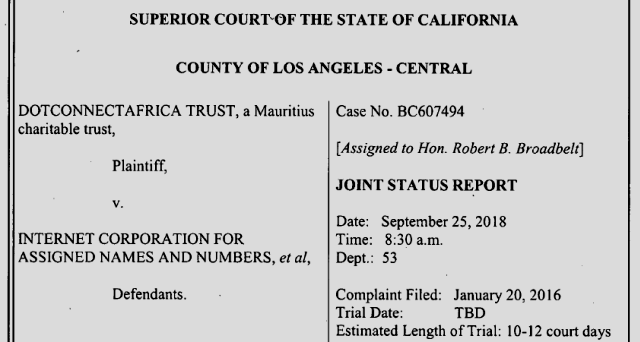 b. Pre-ICANN63 Policy Open House webcast:
Thursday, 11 October 2018, 10:00 UTC and 19:00 UTC. The open house will run in English with simultaneous Spanish interpretation. The presentation materials will be translated into Spanish, and posted following the open house with the recordings of the sessions here. Register via this form by 8 Oct 2018. More info here.

d. Open for Public Comment at ICANN Closing in October (23:59 UTC on the respective date indicated below--subject to change by ICANN):

a. Malicious Domain Names often use a trusted TLS certificate and appear to be safe for online shoppers who unknowingly provide sensitive account information and payment data reports Venafi.com. Among the key findings from the research:
b. Zoho.com says its domain name registrar, TierraNet (tierra.net), pulled Zoho's website offline for a few hours after receiving three phishing complaints in two months related to Zoho-hosted email users. Zoho is now looking for a new domain name registrar according to TechCrunch.com. [Editor's note: Zoho may want to check out Cloudfare Registrar. Early access sign up.]

US-China Internet Bifurcation:
Former Google CEO Eric Schmidt predicts the internet will bifurcate into Chinese-led and US-led versions within the next decade: "I think the most likely scenario now is not a splintering, but rather a bifurcation into a Chinese-led internet and a non-Chinese internet led by America."--CNBC.com.

The spectre of bad Internet laws in Europe should be a warning shot for Canadians https://t.co/bogvr2dbcW
— EFF (@EFF) September 20, 2018

6) Most Read Posts this past week on DomainMondo.com:

4. US Senate Hearing To Examine Safeguards for Consumer Data Privacy