Based on data reported by ntldstats.com, new gTLD Domain Name sales fell 40% in November from October, which is bad news for new gTLD proponents and ICANN which had estimated new gTLD domain name sales of 15 million for FY15 (July 1, 2014-June 30, 2015). Based on results thus far, total new gTLD sales are falling far short of ICANN's estimate, and now are dropping even though more new gTLDs are delegated every month and therefore total monthly sales should be increasing every month. There are over 400 new gTLDs delegated thus far, and yet sales fell in November-- 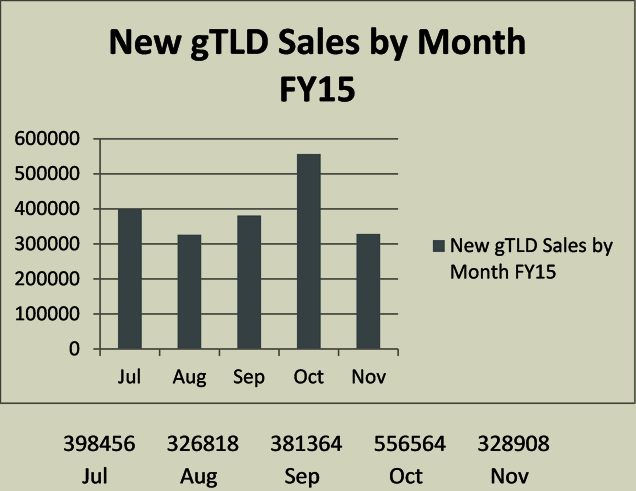 Of course, new gTLD domain names monthly total "sales" (technically "domain name registrations") are affected by tactics such as "free giveaway" programs by registrars and registries of new gTLDs (if you can't sell them, give them away for free and hope the registrant-donees will renew the registration the following year), and  also by registry-registrar-affiliate "land grabs" meaning wholesale speculation and warehousing of thousands of domain names by a registry-registrar or affiliates registering thousands of the best domain names in a new gTLD extension in a registry-registrar affiliate's name for speculative warehousing and resale at premium prices on the aftermarket--a practice that was prohibited in the past by ICANN, but which ICANN has now enabled and encouraged in its new gTLD registry and registrar agreements as is price-gouging of new gTLD domain name registrants in future years. ICANN really knows how to look after the global public interest! LOL!