I didn't listen to the webcast but what was presented apparently didn't impress Wall Street analysts and investors because shortly after the presentation began, the stock started tanking and went "downside" for the rest of the day (see intraday chart screenshot above). I listened to the beginning of the recorded webcast before posting this and it sounded like Rightside's CEO tried to "sell" the investors and analysts on the concept and rationale and "benefits" ("the new gTLDs are all about branding") of new gTLDs--apparently the investors and analysts on Wall Street didn't "buy it."

As regular readers know, although Domain Mondo's editor and publisher have no positions nor interest in this stock, Domain Mondo has posted about it previously here: 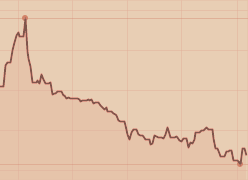 Rightside a/k/a NAME stock has been trending on the "wrongside" and "downside" since its spin-off from Demand Media--chart at left--source: marketwatch.com

Finally, I would note that Rightside CEO Taryn Naidu told TheStreet.com that .COM has "no meaning"-- he might want to "educate" himself:

.com - Wikipedia: "The domain name com is a top-level domain (TLD) in the Domain Name System of the Internet. Its name is derived from the word commercial, indicating its original intended purpose for domains registered by commercial organizations. However, eventually... .com, .org and .net were opened for unrestricted registration. The domain was originally administered by the United States Department of Defense, but is today operated by Verisign, and remains under ultimate jurisdiction of U.S. law. Verisign Registrations in com are processed via registrars accredited by ICANN. The registry accepts internationalized domain names. The domain was one of the original top-level domains (TLDs) in the Internet when the Domain Name System was implemented in January 1985, the others being edu, gov, mil, net, org, and arpa. It has grown into the largest top-level domain."

How big is .COM among all Top-Level Domain Name extensions? It is the one and only truly global Top-Level Domain, the gold standard against which all other TLDs (including ICANN's new gTLDS) are mere dwarfs.