In a letter (pdf) to ICANN President & CEO, Fadi Chehadé, dated January 13, 2016, U.S. Congressman Sean P. Duffy (Rep, Wisconsin 7th District), expressed his displeasure with the ICANN CEO's recent interview on NPR about the IANA stewardship transition proposal being prepared by ICANN for submittal to the U.S. government (U.S. Department of Commerce, NTIA). Congressman Duffy notes in his letter "the widespread opposition in Congress to your efforts" and concluded his letter (emphasis added):

"I urge you to abandon your plans to weaken the Internet for users in the United States and around the world. The Commerce Department has no money to consider your proposal and I will continue to do everything in my power to ensure that it never does." --Congressman Duffy, January 13, 2016 Letter to ICANN CEO Fadi Chehadé 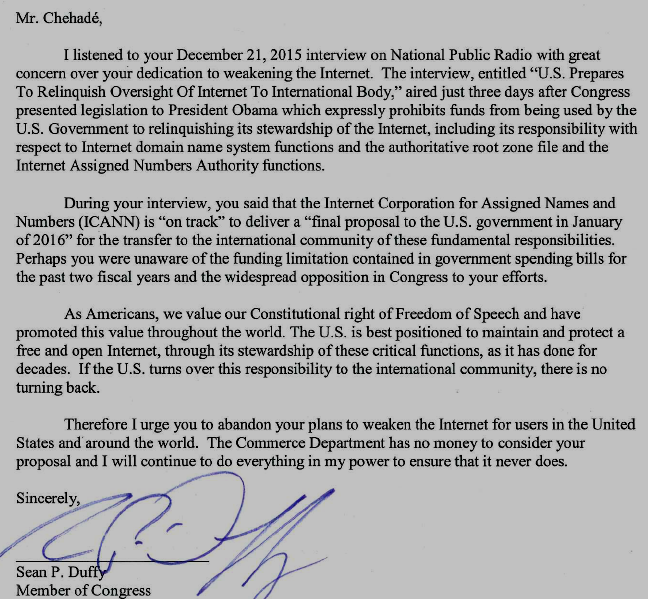 Congressman Duffy has an interesting biography, according to Wikipedia--


"... Duffy started log rolling at age five and speed climbing (sprinting up 60 and 90 foot poles) at 13. He holds two speed-climbing titles. Television career--Duffy has been an ESPN color commentator for televised competitions and in 2003 appeared as both a competitor and commentator on ESPN's Great Outdoor Games. He was named Badger State Games Honorary Athlete of the 2004 Winter Games. In 1997, Duffy appeared on The Real World: Boston, the sixth season of the MTV reality television show, and on Road Rules: All Stars in 1998, where he met his future wife Rachel. Duffy later appeared on Real World/Road Rules Challenge: Battle of the Seasons, which aired in 2002. Both appeared in a filmed segment on 2008's The Real World Awards Bash, while Duffy served as district attorney ..."

Sounds like he could give the real Donald J. Trump a run for his money!  Caveat ICANN!

As for the IANA Transition timetable, here's the latest (Feb 2, 2016) from the CCWG Co-Chairs:

Leading into Marrakech: An Update from the CCWG-Accountability co-Chairs - ICANN: "... Our goal is to distribute the supplemental report to our Chartering Organizations in time for consideration and approval on all Work Stream 1 Recommendations at ICANN55 [March 5-10, 2016] in Marrakech. Keeping in mind the working methods for the various Supporting Organizations and Advisory Committees, we ask that this be into account as the Chartering Organizations plan their discussions and schedules leading into and during ICANN55..."