"Sen. Cruz: ICANN CEO Fadi Chehade Is Misleading the United States Senate
CHEHADE SHOULD RECUSE HIMSELF FROM ALL ICANN DECISIONS THAT COULD IMPACT THE CHINESE GOVERNMENT

"February 23, 2016 | WASHINGTON, D.C. – U.S. Sen. Ted Cruz (R-Texas) issued the following statement today regarding a letter that Cruz, Sen. James Lankford (R-Okla.), and Sen. Mike Lee (R-Utah) received from Fadi Chehade, CEO of the Internet Corporation for Assigned Names and Numbers (ICANN) on Friday. Chehade’s letter [see below] was in reply to one that Cruz, Lankford, and Lee sent [see further below] on February 4 raising serious concerns and requesting information regarding Mr. Chehade’s involvement with the World Internet Conference, which is organized by the Chinese government, a regime notorious for its censorship of the Internet and criminalization of online speech.

“Either the World Internet Conference and the People’s Republic of China have misreported the events that took place during their own conference or Fadi Chehade isn’t being completely honest with the United States Senate,” said Sen. Cruz. “While Chehade continues to state that his first meeting won’t take place until later this year, the Xinhua News Agency, the official press agency of the People’s Republic of China, reported on December 17, 2015 that, ‘The advisory committee held its first meeting on the sidelines of the second World Internet Conference in Wuzhen of east China's Zhejiang Province. Jack Ma, founder of China’s Internet giant Alibaba, and Fadi Chehade, president and CEO of ICANN, act as co-chairman of the advisory committee.’ It should also be noted that Chehade has admitted that he has entered into an arrangement while still serving as the CEO of ICANN and performing under a contract with the United States government, through which his future travel costs to the Chinese government’s state-sponsored World Internet Conference will be compensated. Travel compensation from the Chinese government can be a form of personal conflict of interest, which could impair Chehade’s ability to act impartially and in the best interest of the government when performing under the contract. As such, Chehade should recuse himself from all ICANN decisions that could impact the Chinese government, which include all negotiations and discussions pertaining to the Internet Assigned Numbers Authority (IANA) transition.” "
[--end of update--]

UPDATE (Feb 19, 2016): By letter (pdf)--embedded below--dated February 19, 2016, ICANN President and CEO Fadi Chehade has replied to the letter sent by US Senators Cruz, Lankford & Lee (see further below). Interestingly, the letter sidesteps and does not answer some of the direct questions posed by the US Senators:

US Senator Ted Cruz (who is also currently running for nomination as the Republican candidate for US President), together with US Senators James Lankford and Michael S. Lee, have written to ICANN CEO Fadi Chehade demanding answers about ICANN's participation in the World Internet Conference (WIC) and Chehade's serving as co-chair of a high-level advisory committee for the WIC. Specifically the Senators request a response from Chehade no later than 9:00 a.m. on Friday, February 19, 2016 to the following questions: 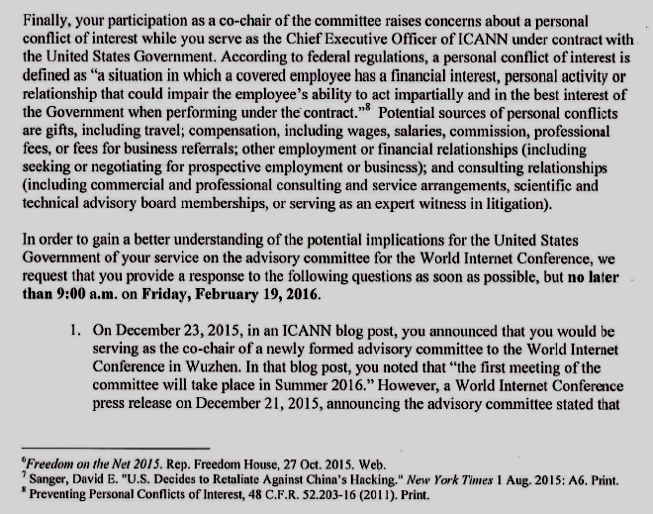 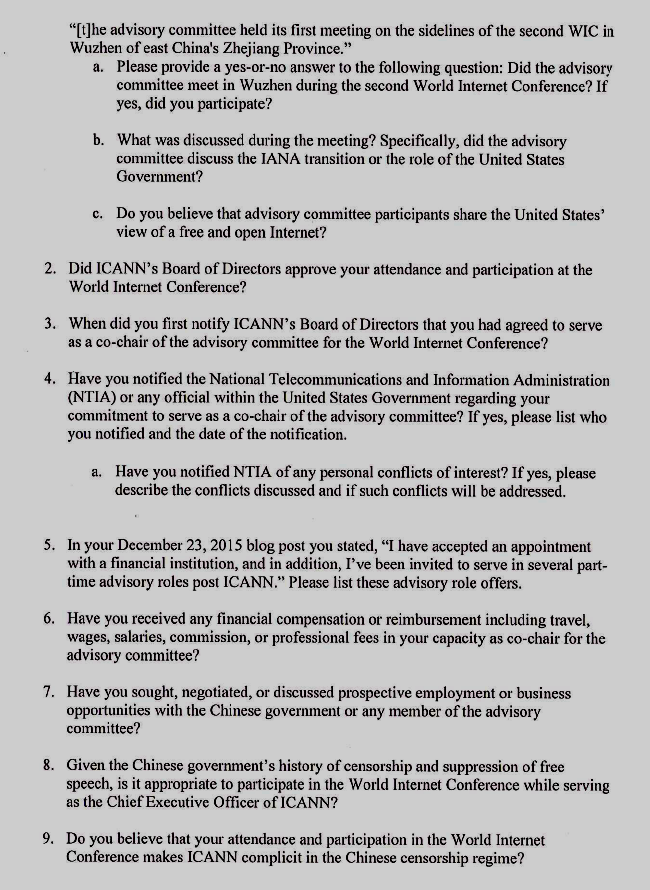 (US Senators Cruz, Lankford, Lee letter embedded below, and available as pdf)