Twitter $TWTR in Play: Is the Price Too High? (video)

Shares of Twitter surged by the most in more than two years following reports that the social media company may soon receive a takeover offer. Bloomberg Gadfly's Brooke Sutherland discusses the details on "Bloomberg ‹GO›" Sep 23, 2016. (Sutherland is a Bloomberg Gadfly columnist. The opinions expressed are her own.)

Salesforce, Google, and Disney, among others, are now reportedly interested in Twitter, the social networking service.  In the short-term, this has been good for Twitter's share price, rising 19% Thursday to Friday last week, and over 28% since August 29th (see chart below). But Twitter is still not flying high. The current price is below the IPO closing day price ($44.90), November 7, 2013, and considerably below the high of $73.31 in December 2013. Since then, the company's market cap has been slashed by billions of dollars. With its current valuation, quarterly "numbers" consistently in the red, and user growth stalling, the potential buyers need to come with deep pockets and solid plans. See also on SeekingAlpha.com: Google Is Going To Buy Twitter and Why Twitter Is Unlikely To Accept A Buyout Offer (reportedly insiders may want as much as $30 billion, considerably higher than the current market capitalization of $20 billion). 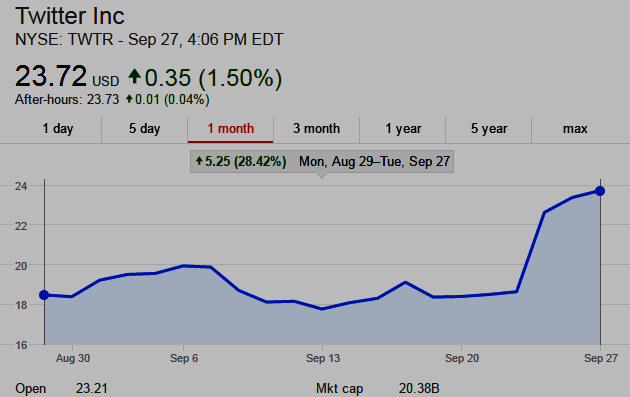