MacroView Feature •  UK has the world’s top economy, defying the dire Brexit predictions of economists: "Britain [UK] ended last year as the strongest of the world’s advanced economies with growth accelerating in the six months after the Brexit vote, it was revealed yesterday (Jan. 5). Business activity hit a 17-month high last month, meaning that the economy grew by 2.2 per cent last year — more than the six other leading nations, including the US, Germany and Japan. Far from slowing after the referendum in June, as predicted by the Treasury and Bank of England, growth appeared to have improved ..."--theTimes.co.uk (emphasis added).

#brexit has now caused the FTSE to crash to an all time high.
— tim wookey (@timothywookey) January 4, 2017 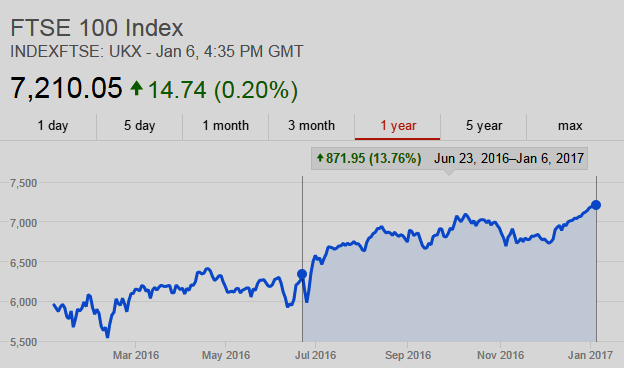 Video above published Jan 5, 2017, by the Financial Times (ft.com): A series of positive UK economic data has defied economists' predictions of a sharp downturn immediately after the Brexit vote on June 23, 2016. The FT.com's Martin Sandbu and Chris Giles unpick why consumer spending has been so strong and discuss the outlook for 2017. See also What Have the "Experts" Gotten Right? In the Real Economy, They're 0 for 5 | washingtonsblog.com and SeekingAlpha.com Jan. 3, 2017: "The Brexit bashing continues [even] after British manufacturing growth soared to a two-and-a-half-year high last month, fueled by new orders from both home and abroad. Markit's U.K. Manufacturing PMI rose to 56.1, from 53.6 in November, faring much better than many economists predicted in the aftermath of the vote to leave the EU. The FTSE 100 hit a new record high on the news, rising 0.5% to 7173.50" and China sends first freight train on 8,000-mile journey to London | CNN.com: "This cargo train service highlights important trade partnership between the UK and China post-Brexit," said Oscar Lin, manager of the UK-based Onetwothree Logistics, which is handling customs clearance and distribution for goods on the train, according to state-run China Daily."

Other Macro Economic and Investing News:

•   Obama's Legacy: For years, Obama insisted that Syria wasn't of great strategic importance to the United States. His miscalculation had massive repercussions, including upon Europe. Europe has struggled for years to assimilate Muslim arrivals from the Middle East and Africa, many of whom do not adhere to European cultural values. The waves of Syrian refugees unleashed by Obama's failure to contain the Syrian civil war created a crisis of unparalleled magnitude in Europe, throwing countries from Turkey and Hungary to Germany and France into turmoil--BusinessInsider.com. See also: The rest of the story: What Obama won’t tell you about his legacy | MarketWatch.com.

•   China, Inc.: "China's strategy is defined and directed by the Communist Party of China (CPC). It is, in other words, a State initiative, conceived to accomplish State strategic purposes. It is most of all a political initiative designed to enhance and project Chinese power. It is not in any way a product of conventional business strategic thinking ... conventional measures of business success or failure like return on capital or profitability have little or no significance."--SeekingAlpha.com. See also Time for constructive confrontation with China | TheHill.com: "... there is a yawning gap between China's WTO commitments and its actual practices — and it continues to grow. For example, China promised to stop requiring transfers of technology as a condition of market access, but it hasn't. It promised to shrink its state-owned industries as a share of its total economy, but it hasn't. And it promised to significantly reduce intellectual property theft, but it hasn't. There is a long list of these kinds of broken promises, revealing the WTO's enforcement practice for what it is: a paper tiger ..."

•   Election 2016 Redux: Donald J. Trump will be inaugurated U.S. President on Jan. 20th. Until then, we have sideshows in the media, courtesy of the Obama administration and other politicos:

Who do you believe America?
— John Harwood (@JohnJHarwood) January 6, 2017

John Harwood is an American journalist who is the chief Washington Correspondent for CNBC.com. He is also a contributor for The New York Times.

Mediagazer.com: "US intelligence report: Russia Today [a/k/a RT.com] played a key role in the Putin-ordered campaign to undermine the US election, collaborating with WikiLeaks." RT.com? Most Americans have never even heard of, much less watched or read RT.com, until now, so I went to the website and there is some interesting content there, particularly with the free "publicity" generated by the Obama administration and the U.S. government's "national 'intelligence' community." I recommend you read the following:
We all know mainstream media in the U.S. (NYTimes.com, WashingtonPost.com, ABC, CBS, NBC, CNN, et al ), were trying to help Hillary Clinton win the White House ("the downfall of the mainstream media in the presidential election, it was a self-satisfied echo chamber"--Lefsetz.com). The mainstream media narrative has changed from "Hillary will win the election, Trump has no path to 270 electoral votes" to Secret CIA assessment says Russia was trying to help Trump win White House | WashingtonPost.com. If you believe the Obama administration, and its "national 'intelligence' community," then you know who to thank for exposing the corruption and collusion of the Clintons, the Clinton campaign, DNC, and media: WikiLeaks and Russia. Apparently, if not for WikiLeaks.org and Russian hackers, we would have never known of the efforts of the Clinton campaign and DNC to "rig" the primary elections against Bernie Sanders, nor would we have known of the extent of corruption and collusion involving Bill and Hillary Clinton, the Clinton Foundation, DNC, media, and others, including foreign governments and other 'special interests' who paid the Clintons $200,000 to $800,000 per speech, and also funded the Clinton Foundation while Hillary was Secretary of State, as well as Hillary Clinton running her U.S. Secretary of State communications through a private "home brew" email server from which she destroyed 30,000+ emails so the public would never know the true extent of her nefarious activities, including the full extent of the Clintons' pay-to-play schemes.

Also remember, the "mainstream media," including the Washington Post and New York Times, published articles detailing the disclosures provided by and through WikiLeaks.org, and the authenticity of the hacked emails and other documents provided by WikiLeaks has also been supported in the course of the U.S. government investigation into the hacks. All governments, including the U.S. government, hack other governments, including political parties and politicians--see NSA tapped German Chancellery for decades | TheGuardian.com--there is nothing unusual here, except the exposure of corruption and collusion of the Clintons, Clinton campaign, DNC, and establishment elites, including "mainstream media." Had Clinton won the campaign, as the media and elites expected, we would be not be hearing about "Russian hacking."

A reset in the U.S.-Russia relationship could be a "win-win" for everyone, including Europe. Putin and Russia appear to be willing, and Trump and his nominee for Secretary of State, Rex Tillerson, are not "carrying the baggage" of Obama and Hillary Clinton, nor beholden to the "inside the beltway" Cold War anti-Russia establishment. #DrainTheSwamp. Read Trump Aims to Cut the Neocon Deep State Off at the Knees.

•  One more thing: "Television, newspapers and other media industries are struggling with slow-to-declining advertising revenue."--Bloomberg.com. Perhaps that explains the media's post-election hysteria? Read WashPost Is Richly Rewarded for False News About Russia Threat While Public Is Deceived | theIntercept.com.