1) EU GDPR & ICANN WHOIS, What's Next? "Timeline needed by March 23, 2018"
Editor's note: The EU General Data Protection Regulation (GDPR) was adopted on 27 April 2016, and after the two-year period allowed for transition, will become enforceable 25 May 2018. Sanctions for violations include substantial penalties. In my 12 Questions for 2018 (published 31 Dec 2017) I asked:

Short answer: "No," based on ICANN's 15 March 2018 presentation referenced above and below.


Who Is Afraid of More Spams and Scams? | KrebsOnSecurity.com March 18, 2018: “Asked for his take on the chances that ICANN and the registrar community might still be designing the [WHOIS] vetting system this time next year, [ICANN SSAC Chair Rod] Rasmussen said '100 percent'." 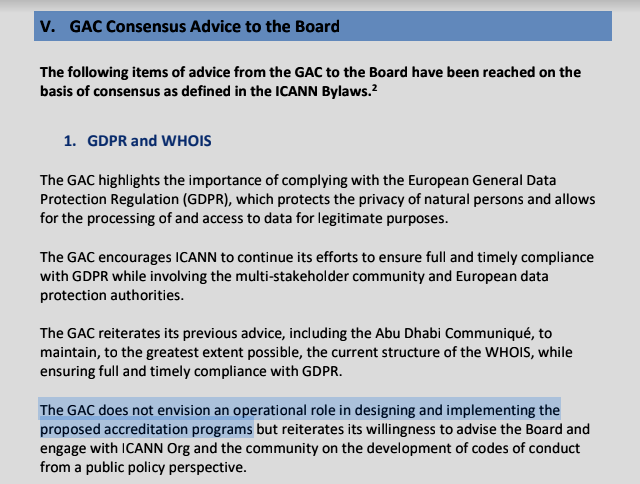 Answer (paraphrased): ICANN doesn't have or collect this data, although it could.

In other words, ICANN is clueless when it comes to the geographic distribution of domain name registrations and registrants, ICANN's true "customers" who directly, and indirectly, fund ICANN. Next time ICANN says some area is "underserved,"  ask, "where's the data" that supports that statement. Because ICANN does not have the data, it often confuses "lack of demand" with "underserved." Many areas have little demand, in total or per capita, for gTLD domain names, for a variety of reasons having nothing to do with ICANN's remit, including economic, cultural, government censorship and internet shutdowns, unaffordable or unavailable internet connectivity, etc. The data in the Domain Mondo post Domain Name Registrations and the Global Internet Population is dated 2011-2013, but even then was enlightening: "The majority of domain names (78%) are registered in Europe or North America (US alone has about 33% of all registrations); Asia has 13%, Latin America 4%, Oceania 3%, and the Middle East and Africa combined 2%." ICANN is willfully data ignorant for a reason--incompetent ICANN management mostly hired or promoted by the former ICANN CEO whose primary criterion was cronyism (see "Now hiring"). Without the accountability of data, it is easy to become an empire-builder and justify all kinds of wasteful spending while rationalizing cuts to the organization's core mission, particularly when you are a new CEO:

Finally, as a follow-up to my previous (Feb 11) post, News Review | ICANN61 & Puerto Crypto, San Juan, Puerto Rico, not everyone packed up and left San Juan after ICANN61 ended--here's a video of Damaris Rivera, Puerto Rico Advantage, at Blockchain Unbound 2018 this past week in San Juan:

e. Webinar on ccNSO Rejection Action Guideline: Recordings and Slide Deck | Country Code Names Supporting Organisation (ccNSO) | ICANN.org: ccNSO Procedure for the Exercise of the Empowered Community's rights to Reject Specified Actions explained and discussed, to ensure ccTLDs are aware of their own roles and responsibilities, those of the ccNSO as a whole and of the ccNSO Council. See the recording and the slide deck used during the webinar.

a. How to Start Your Own Small Business - Women Small Business Owners | cosmopolitan.com: "... And lock down a URL [domain name]. Typically, [brand name]+[industry] setups work well (for example, MILKmakeup.com) ..." [Editor's note: I generally recommend getting a .COM domain name and do this before registering your name with a government office or making public your name, and by all means, do your 'due diligence' before registering the domain, avoid trademark infringement, etc.]. See also: Branding and Trademark Series: Building a Brand | Nutter McClennen & Fish LLP | JDSupra.com.

b.  Is the logo still the most important part of a brand's image? | designweek.co.uk: "... Perhaps the name now has a bigger role in defining a brand. It’s not just how a brand looks but also how it sounds ... Market research company ComScore estimates that 50% of all searches will be completed by speaking by 2020. If people can’t pronounce the name, then how can they possibly request it from a voice assistant like Alexa or Siri?"

b. Malware: Potent malware that hid for six years spread through routers | ArsTechnica.com: "Nation-sponsored Slingshot is one of the most advanced attack platforms ever."

5) Four most read posts this past week (Sun-Sat) on DomainMondo.com:

4. How a Steel Box Changed the World: A Brief History of Shipping (video)