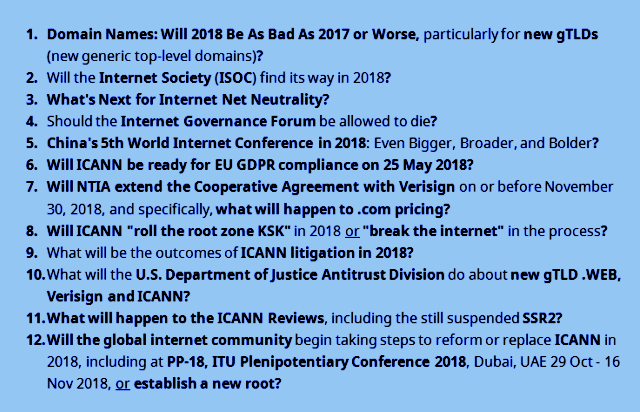 Keeping Copyright Site-Blocking At Bay: 2017 In Review | Electronic Frontier Foundation | eff.org: "... This year, we’ve kept pressure on ICANN, the nonprofit body that makes domain name policy, to keep copyright enforcement out of their governing documents. And we’ve called out domain name registry companies who bypassed ICANN policy to create (or propose) their own private copyright enforcement machines. Public Interest Registry (PIR), the organization that manages the .org and .ngo top-level domains, announced in February that it intended to create a system of private arbitrators who would hear complaints of copyright infringement on websites. The arbitrators would wield the power to take away a website’s domain name, and possibly transfer it to the party who complained of infringement. The Domain Name Association (DNA), an industry trade association [started by Fadi Chehade and ICANN], also endorsed the plan. EFF pointed out that this plan was developed in secret, without input from Internet users, and that it would bypass many of the legal protections for website owners and users that U.S. courts have developed over the years. Within weeks [and only after being exposed by the EFF], PIR and DNA shelved this plan, apparently for good. Unfortunately, some domain registries continue to suspend domain names based on accusations from major motion picture distributors (whom they call “trusted notifiers”) ... these policies erode public trust in the domain name system, a key piece of Internet infrastructure ..."

"Whereas, the IANA Stewardship Coordination Group (ICG) included in its proposal that the intellectual property held by ICANN in relation to performing the IANA functions should be transferred to a neutral third party to hold for the benefit of the global Internet community, and licensed back to ICANN."

4. Should the Internet Governance Forum be "allowed to die" (like the NetMundial Initiative)?

10. What will the U.S. Department of Justice Antitrust Division do about .WEB, Verisign and ICANN?


Editor's note: As I noted last week, ICANN mismanaged its ill-conceived and misbegotten expansion of gTLDs from just 22 to over 1200, rejecting the advice of the Federal Trade Commission (FTC) (pdf) and U.S. Department of Justice Antitrust Division (pdf) with regard to competition, pricing power, and consumer (registrant) protection. The above US DOJ letter was sent to ICANN by NTIA in Dec 2008 (pdf).

"Item 7.01. Regulation FD Disclosure.
As the Company (Verisign, Inc.) previously disclosed, on January 18, 2017, the Company received a Civil Investigative Demand from the Antitrust Division of the United States Department of Justice (“DOJ”) requesting certain material related to the Company becoming the registry operator for the .web gTLD.   On January 9, 2018, the DOJ notified the Company that this investigation was closed.   Verisign previously announced on August 1, 2016, that it had provided funds for Nu Dot Co’s successful bid for the .web gTLD and the Company anticipates that Nu Dot Co will now seek to execute the .web Registry Agreement with ICANN and thereafter assign it to Verisign upon consent from ICANN." (emphasis added)


11. What will happen to the ICANN Reviews, including the still suspended SSR2 (by unilateral action of the ICANN Board of Directors on Oct 28, 2017, with AC/SOs leadership acquiescence)?

"The ITU has problems, but there is no other organization that includes most of the world. In particular, 14 out of 18 board members at ICANN come from the U.S. and allies. The majority of world Internet users aren't represented. This is unsustainable."--circleid.com (emphasis added).

Is Multi-Stakeholder Internet Governance Dying? | Electronic Frontier Foundation | eff.org: "... there is a strong tendency for ICANN working groups to be stacked with private sector stakeholders such as lawyers for intellectual property rights holders and the domain name industry, who are able to dominate discussions, to obstruct attempts at compromise, and to push for one-sided outcomes, such as the right for a single company to control a generic word domain. As a result, ICANN, although notionally multi-stakeholder, in practice fails to fulfil the criterion of balance. Its processes do not place a priority on the facilitation of understanding and consensus between warring stakeholder groups, and this feeds politicking and strategic behavior. Even many industry stakeholders acknowledge this shortcoming; for example Jonathan Matkowsky, who works for a digital threat management company, said in an ICANN mailing list post recently, “It's very sad to see the open Internet breaking down as a result of the multistakeholder process failing to work.”" (emphasis added)

APC Priorities for the 12th Internet Governance Forum | Association for Progressive Communications: "being influential in ICANN requires a degree of effort and consistency which is difficult to sustain ... even in the IGF the fragility of the multistakeholder approach is evident as participation from governmental and business actors appears to be tailing off."

A Closer Look at Why Russia Wants an Independent Internet | circleid.com: "the ICANN board in 2016. The Internet doesn't look like this anymore."

Russia Will Build Its Own Internet Directory, Citing US Information Warfare | DefenseOne.com."In 2014, the U.S. cleverly announced it would give control of the DNS database to a non-governmental international body of stakeholders, a process to be run by the California-based Internet Corporation of Assigned Names and Numbers, or ICANN. “Now, when China stands up and says, ‘We want a seat at the table of internet governance,’ the U.S. can say, ‘No. The internet should be stateless.’ They’re in a much stronger position to make that argument today than they were before,” Matthew Prince, co-founder of the company Cloudflare, told Defense One at the time. In a statement Tuesday, Kremlin spokesman Dmitri Peskov framed Russia’s desire for an alternative DNS as essential to “protecting it from possible external influence.” “We all know who the chief administrator of the global internet is. And due to its volatility, we have to think about how to ensure our national security,” Peskov said ... The move follows Russia’s 2016 launch of its own segregated military internet for top-secret communication, called the Closed Data Transfer Segment, modeled slightly after the U.S. Joint Worldwide Intelligence Communications System, or JWICS. (emphasis and links added).

ICANN | Electronic Frontier Foundation | eff.org: "ICANN's susceptibility to capture has been no more evident than in the excessive deference given to the interests of intellectual property owners." Read also Why Did ICANN Become a Member of Trademark Lobbyist Group INTA? | DomainMondo.com Oct 15, 2015.

Editor's note: remember, the global internet community, including domain name registrants, never chose ICANN, the U.S. government did. ICANN is a California corporate monopoly controlled primarily by the special interests mentioned above by EFF.org (gTLD registry operators and registry service providers, registrars, trademark lawyers, big tech (mostly U.S.) companies, and other special interests, lawyers, and lobbyists), who collectively are often referred to as the "ICANN community" which does not represent the global internet community and therefore is unable to reflect the global public interest. It should be a priority to reform or replace ICANN and its "ICANN community" with a more representative, balanced organization, with the ability to provide consumer (registrant) protections, and act as a competent and responsible steward of the global internet DNS, a global public resource, in accordance with the principles of RFC 1591.

•  Net Neutrality: Team Internet Is Far From Done: What’s Next For Net Neutrality and How You Can Help | Electronic Frontier Foundation | eff.org

•  China closed more than 13,000 websites in past three years reports China's  state news agency Xinhua: The Chinese government says all countries regulate the internet, and its rules are aimed at ensuring "national security and social stability" ... users themselves were punished for sharing sensitive news and commentary, with prison terms ranging from "five days to eleven years."--"These moves have a powerful deterrent effect," said Wang Shengjun, vice chairman of the Chinese parliament’s standing committee--usatoday.com.

•  Google & Cybercrime: A year ago, a grand jury in Palm Beach County, Florida, investigated fraud and abuse in the addiction industry and found that gaming Google searches is a common tool for criminals to lure addicts into questionable and sometimes dangerous treatment. Addiction treatment in America is driven by effectively paying to acquire patients, in the form of digital marketing or so-called patient lead acquisition. Google is at the center of it all. There’s big money involved. "A midsize addiction treatment center can easily shell out $1 million a month or more for Google AdWords."--Why It Took Google So Long to End Shady Rehab Center Ads | Bloomberg.com. [Editor's note: in September, Google announced plans to stop accepting ads for rehab centers.]

•  Has the New York Times Made Gloria Steinem's Original 1998 Defense of Bill Clinton Disappear? | newsbusters.org: "... Steinem sent her feminist credentials into the toilet in March 1998 when, in a Times op-ed, she defended Bill Clinton against the charges which eventually led to his impeachment later that year. The link to that op-ed in the previous paragraph was found in a public library database. That's because I couldn't locate it in multiple searches at the Times website ..."

•  Ten Reasons Libraries Are Still Better Than the Internet | AmericanLibrariesMagazine.org

•  How Facebook's Secret Unit Created Digital Propaganda Troll Armies To Influence Elections | ZeroHedge.com: "how a secret unit of Facebook has helped create troll armies for governments around the world including India for digital propaganda to influence elections."

•  The Internet: 10 predictions for 2018 | DiploFoundation | diplomacy.edu

Top 3 Most Read this past week:

2. Investors Warned By FINRA Not To Get Fooled By Bitcoin Scams (video) Dec 26