As of June 30 2017, Verisign reported the world's ten largest TLDs (top-level domains) were: 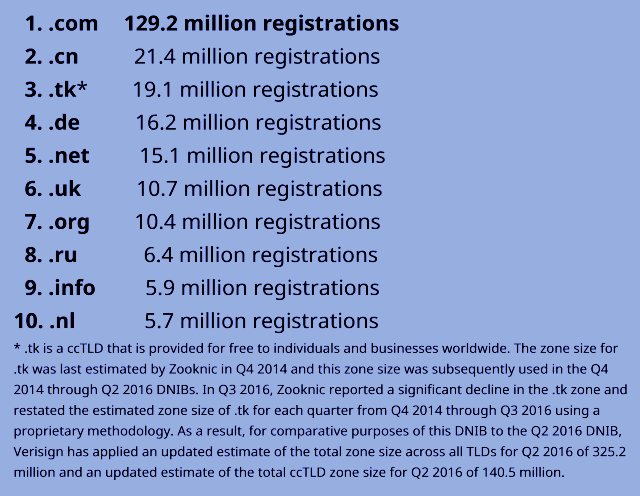 As of June 30, 2017, there were 302 ccTLDs (country-code top-level domains) delegated in the internet root, including Internationalized Domain Names (IDNs), with the top 10 ccTLDs comprising 64.8 percent of all ccTLD domain name registrations. Total ccTLD domain name registrations were approximately 144.2 million, a 0.8 percent increase over the first quarter of 2017, and a 2.6 percent increase year over year.

Editor's note: "other gTLDs" include ICANN's new gTLDs which were launched starting in 2014, and many are already referred to as "garbage extensions" by astute domain name registrants worldwide.

Obviously, ICANN and its "ICANN community" of lobbyists and "special interests," as well as most new gTLD registry applicants and operators, are clueless about what consumers (registrants) really want and need. Hardly surprising since most domain name registrants are excluded, by design, from ICANN policy-making structures.

•  Chairman’s Blog: Previewing the Montevideo Workshop | ICANN.org: "From 20-23 September 2017, the ICANN Board of Directors will be meeting in Montevideo for our last intersessional Board workshop of the year ..." and ICANN Board to Hold Public Session and Board Meeting During Montevideo Workshop - ICANN:
The sessions will be in English only. The format for each will be a listen-only session via Adobe Connect: https://participate.icann.org/opencommunity/.
Additional access numbers and participant codes here. More information: here.

•  ICANN 'Last Resort' Auction Proceeds CCWG Newsletter | August 2017 (pdf):"The CCWG will NOT make any recommendations or determinations with regards to specific funding decisions (i.e. which specific organizations or projects are to be funded or not)."

•  EU GDPR: Data Protection and Privacy: Progress Update and Next Steps | ICANN.org: "... an update on our data protection and privacy work as it relates to the European Union's General Data Protection Regulation (GDPR) ... We have now consolidated the information that was collected into a more easily readable format [PDF, 686 KB]. A high-level summary is also included in the document. We encourage you to review the submissions, and the summary ..."

.@webdotcom has 1 star rating. Reading horror stories and they're pretty nasty as I have experienced too. https://t.co/PuAMwqOMHu #Domains
— Rick Schwartz 👑 (@DomainKing) September 16, 2017

•  Harvey and Irma scams: "Real websites for first responders, insurance companies, construction, medical and other vital organizations in the Florida and Texas areas — are being targeted by these malicious spoofed domain registrations."--circleid.com.

•  "Phishing scams seem to be getting more common and more sophisticated"--Fighting Phishing with Domain Name Disputes | circleid.com.
•  DNS vulnerability: What would happen if the DNS, the ‘phone book’ of the internet, were compromised? | MarketWatch.com: "... one crucial part of the internet’s infrastructure, the Domain Name System (DNS), isn’t diverse ... As applied to DNS, diversity means making sure these mission-critical services aren’t all the same type ..."

•  Booking.com Trademark: Booking it to the District Court | Dorsey & Whitney LLP | JDSupra.com: "This case is unusual because the trademark applicant, Booking.com, B.V., did not appeal the refusal decision to the Court of Appeals for the Federal Circuit, but instead filed a civil suit against the Director of the U.S. Patent and Trademark Office.  This allowed the Virginia federal court to review the record de novo and as the finder of fact ..."

•  Law Firm Squire Patton Boggs in battle over its name in China--worldtrademarkreview.com

•  Intellectual Property 101: What It Is and Why I Should Protect It | NatLawReview.com

•  Internet Tax: Doomed plan to tax online retailers | RStreet.org: "Gov. Charlie Baker wants Massachusetts to join a handful of other states in a doomed effort to pass an extraterritorial taxing scheme that the U.S. Supreme Court has already declared unconstitutional."

•  Cuba’s Internet paradox: How controlled and censored Internet risks Cuba’s achievements in education | Amnesty.org. See also: Google included a freedom of information clause in deal with Cuba--"Google Global Cache uses local servers to store content from Gmail and YouTube, among others. The service, which began operating in Cuba in late April, is the result of a partnership with the state-owned telecommunications monopoly, ETECSA."--MiamiHerald.com

•  Apple & China--"... it appears that instead of successfully pushing China towards more progressive ideals, Apple is conceding to continue massive profitability ..."--It’s Time To Be Honest About What Exactly Apple Is Doing In China | DailyCaller.com

6. The 'Hurricane Irma Trade' in Florida Oranges and Sugar (video)