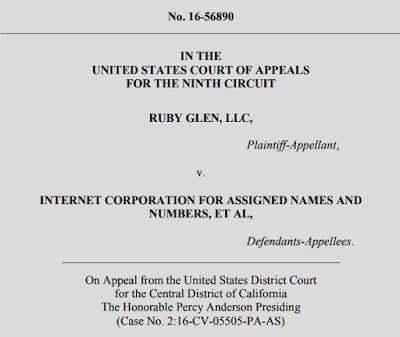 Editor's note: Afilias, not Ruby Glen (Donuts), was the second-highest bidder (pdf) at the .WEB auction (pdf). So what's the point of the lawsuit and appeal? Reportedly spite. Donuts (Ruby Glen) apparently was betting on getting a private auction for .WEB from which it would have received more than $22 million as a "losing" bidder under ICANN's authorized "casino-like" private auctions. (Note that the biggest, and maybe the only, profits made thus far with new gTLDs, have been in "gambling" within the private auctions and getting the winning "sucker" to bid high.)

Instead, in the case of .WEB, due solely to the insistence of the winning bidder, the ICANN "last resort" auction for .WEB produced net proceeds of over $132 million for beneficent purposes in accordance with the Applicant Guidebook, as well as ICANN's mission and status as a 501(c)(3) non-profit public benefit corporation.


"... any claims that do not lie in fraud or willful injury are barred by the Covenant [Not to Sue]. Those that do, are not [barred][p.5] .... The Court cannot therefore, find as a matter of law that ICANN did not defraud DCA by stating on the one hand it would follow its Bylaws and Articles of Incorporation in processing DCA's application, while on the other hand giving preference to ZACR's application throughout the process. CONCLUSION: For the foregoing reasons ICANN's motion for summary judgment is denied as to the second, third, fourth, fifth, and tenth causes of action. The motion is granted as to the remaining causes of action."[p.10] [Dated Aug 9, 2017](emphasis added)

Order on ICANN's Motion for Summary Judgment (pdf)(embed below)

c.  Quote of the Week [CCWG-AuctionProceeds] Conflict Of Interest: "This is ICANN, where there is effectively no such thing as conflict of interest so long as you declare."--Evan Leibovitch (emphasis added)

SecuringIndustry.com: US man arrested for fake clothing smuggling: "... a "sophisticated scheme" to import around 200 shipping containers of fake brand-name apparel from China into the US. Su Ming Ling (50), a former resident of Queens, New York, was arrested in California ... According to legal documents, Ling allegedly used several aliases between May 2013 and January 2017 to register and create numerous internet domain names and email addresses with the intention that they resembled the internet domain names of real US businesses ..."  See also Luxury Brands Just Got One More Reason to Hate the Internet: Spoofing | Adweek.com: "New study reveals it's a bigger problem than many believed."

•   What Is DNS Hijacking? | WIRED.com: "... A hacker who's able to corrupt a DNS lookup anywhere in that chain can send the visitor off in the wrong direction, making the site [website] appear to be offline, or even redirecting users to a website the attacker controls ..."  See also How DNS TXT records can be used against enterprises | searchsecurity.techtarget.com.